Creatures of a Day

Oh, to spend some therapeutic hours with Irvin Yalom! In fact, many patients seek treatment with the renowned psychoanalyst after reading his tales of psychotherapy (Love’s Executioner) or philosophical novels (When Nietzsche Wept, The Schopenhauer Cure). With Creatures of a Day, his latest volume of illuminating stories about heavily disguised cases from his practice, readers can share a taste of his existential approach to therapy.

Creatures of a Day is an excellent choice for book groups because Yalom’s patients face such universal problems: terminal illness, unreciprocated love, social isolation, commitment issues; yet the stories he tells of their therapies are specific, compelling — and instructive.  Yalom presents case histories like puzzles needing to be solved, stories in which Detective Yalom reveals his methodology while highlighting the sometimes frustrating yet ultimately fascinating  uncertainties of his profession. He is refreshingly quick to point out his wrong turns: “Yikes! What a blunder to have tried this. I could hear the minutes clicking by,” he writes when a patient seems impervious to one of his unorthodox tacks. But he also shares his delight — and his humble surprise — when patients achieve breakthroughs of which he’d despaired. In other words, this is a wizard who pulls back his own curtain, allowing readers an intimate behind-the-scenes view of the elusive therapeutic process.

Like his earlier books, Creatures of a Day showcases Yalom’s concern with four central existential issues — death, meaning in life, isolation, and freedom. The title is from a sobering reminder about mortality in Marcus Aurelius’ Meditations: “All of us are creatures of a day; the rememberer and the remembered alike. All is ephemeral — both memory and the object of memory. The time is at hand when you will have forgotten everything; and the time is at hand when all will have forgotten you. Always reflect that soon you will be no one, and nowhere.” 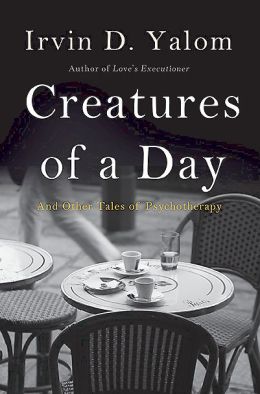 Depressing?  Actually, not in context. After learning that a patient, a reluctant fiancé named Jarod he’d been treating for more than a year, hadn’t told him that he’d been two-timing his fiancée with another woman — who also expects him to marry her — Yalom immediately explores why Jarod had withheld this crucial information. Jarod admits his fear of ruining Yalom’s image of him. It occurs to Yalom, who has been brushing up on his Marcus Aurelius for another patient, that the second-century Roman emperor’s wise words about the ephemerality of us all might underscore the insignificance of his opinion of Jarod in the grand scheme of things. His ploy doesn’t work as planned during the session — but Jarod returns for his next appointment bursting with fresh insights about how his “hollowness” and “lacking a self” caused him to look for “me in you,” making it impossible to identify his own needs and desires — just the ” ‘aha’ experience” Yalom had hoped for.

Time is central in Creatures of a Day. While readers, unlike patients, aren’t subject to the tyranny of the session clock, the mortal clock ticks loudly in these pages. Many of Yalom’s patients seek counseling after a scary diagnosis or the death of someone close to them. And many seek short-term therapy — some as short as a single session — which adds to the time pressure. So, too, does Yalom’s advanced age. Born in 1931, he encourages his patients to openly broach their concerns about his longevity. “Here, we have, or we should have, no taboos against honesty,” he says repeatedly. To reassure one patient, he tells a personal anecdote about the relief he experienced upon realizing that a frightening vision of his wife’s death wasn’t real; his upbeat takeaway is that “anticipating endings may encourage us to grasp the present with greater vitality.”

Yalom is not of the silent school of therapists, and in fact has been criticized for his prominent presence in his interactions with patients and his insistence on the centrality of their relationship. In these stories, he often shares personal experiences and insights, which patients invariably greet with gratitude. (“It means a lot when you speak personally like this,” comments a woman fixated on a former lover who represents her lost magical youth.) After re-reading Love’s Executioner at eighty, Yalom commented in a new afterword on the “audacity” of his younger self. Using the third person to emphasize his distance from the middle-aged author, he wrote, “His amount of self-disclosure was outrageous twenty-five years ago and set most therapists’ teeth on edge. And still it seems outrageous. I personally feel shocked. How dare he disclose so many of my private matters?” But then he added, “Despite such behavior, I am nonetheless proud of his putting nothing in the way of forging a true therapy encounter; I would do exactly the same today. I remain convinced that a therapist’s judicious self-disclosure facilitates the course of therapy.”

Also consistent with his younger self are Yalom’s dislike of categorization and rigid diagnoses, and his belief that such codification — increasingly required by insurance companies — is less helpful than treating each patient on an individual basis. He is particularly empathetic of  blocked writers, though when he finds himself “settling comfortably into a writerly conversation” with a talented older poet determined to fulfill her long-abandoned literary ambitions, he reminds himself, “Careful. Careful . . . She has come for help, not conviviality.”

Yalom holds the therapist-patient relationship supreme, and frequently pauses during sessions to assess this relationship and the process of therapy. These “How are we doing now?” moments, while important to Yalom’s particular process, often ring awkward or false, in part because, summarized as they are here,  the interchanges sound like canned or condensed theraspeak. Natural, more discursive, groping dialogue has never been Yalom’s literary forte.

Several of the tales, including “Get Your Own Damn Fatal Illness: An Homage to Ellie,” are moving tributes to patients who have died. In “Thank You, Molly,” Yalom, approached by a former patient at the funeral of his longtime, hyper-organized bookkeeper, Molly, learns to his surprise and delight that, thanks in part to an offhand recommendation he made when the patient stopped treatment abruptly, his outcome was better than expected.

Yalom says he writes these “tales of reclamation” for people with “a keen interest in the human psyche and personal growth.” For further reading, I heartily recommend Yalom’s Love’s Executioner, When Nietzsche Wept, and Lying on the Couch,  Marcus Aurelius’ Meditations, psychotherapist Deborah Anna Luepnitz’s book of case histories, Schopenhauer’s Porcupines: Intimacy and Its Dilemmas, and of course the granddaddy of case studies, Joseph Breuer and Sigmund Freud’s 1895 Studies in Hysteria.

Readers might also want to try a gambit Yalom often employs to gather information and jump-start discussion: Describe a twenty-four-hour period of your life in the past week, beginning with the time you awake. It’s an exercise that can reveal a lot, including how much (or little) intimacy a life contains. Or, if that doesn’t appeal, try posing the open-ended question: “What do you want?”  Your own answers might surprise you as much as others’. And if Creatures of a Day conveys one thing loud and clear, it’s that while our lifetimes are narrowly bounded, our ability to zero in on what really matters shouldn’t be.