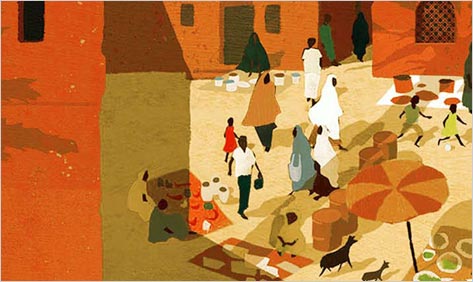 Most Americans, if they think of Somalia at all, know it only from Black Hawk Down, the 2001 film adaptation of Mark Bowden’s 1999 account of the bloody Battle of Mogadishu. Tragic though those events were, they represent a mere sliver of the decades of internal strife that have left Somalia one of the poorest and most violent countries in the world. Moving from Communist rule to dictatorship to civil war, there has been no functioning central government for twenty years. Warlords and clan factions have given way to militant Islam, and pirates terrorize the coastal waters. “That unfortunate country, cursed with those dreadful clanspeople, forever killing one another and everyone around them,” is the bleak précis offered by one of Nuruddin Farah’s characters. It’s to this unpromisingly harrowing milieu that Farah has tirelessly devoted himself for eleven novels that paint a more nuanced picture of the country’s woes than one is likely to find on CNN.

Farah, who departed Somalia in 1976 and now divides his time between Cape Town and Minnesota, has devoted three trilogies to his homeland, and Crossbones is the culminating volume of his Past Imperfect trilogy, which began with Links (2003) and continued with Knots (2007). Although several of its characters appear in the preceding books, Crossbones can be read on its own.

Crossbones is set against another violent chapter in Somalia’s history, the 2006 civil war in which Ethiopia invaded to support the Transitional Federal Government in its power struggle against the Islamists. Against this backdrop, two brothers enter the country on separate but intertwined missions. Malik, a New York-based freelance journalist of Somali parentage, makes his first trip to the country in the hope of reporting on the burgeoning conflict. At the same time, his brother Ahl has come from Minnesota to try to locate his stepson, who has disappeared and is rumored to be training as a suicide bomber.

It’s the latest of fate’s cruel iterations for Somalia that the country has moved from the control of warlords into the hands of the Islamic Court Union. The uniforms may have changed — “most of the youths have grown beards and donned those white robes” — but the “general collapse is still the same, though: houses with their insides caved in, with a Lego-like look to them…”

Malik’s and Ahl’s parallel narratives unfold against this blasted, damaged landscape, as they are aided by friends, relatives, and the ubiquitous fixers. Farah explores the disintegration of his country in painful detail. The influence of the West is one of several recurrent themes: The book’s opening image is of a Yankees cap atop the head of a young militant; almost 400 pages later, Ahl’s stepson will be seen sporting a Lakers cap. Farah also spends a considerable portion of his novel unpacking the intricacies of the ongoing power struggle and clan loyalties, as well as the origins of Somali pirates, who first took to the seas to try to prevent illegal fishing in the area.

All of this is fascinating, often chilling, sometimes moving, but Farah has devoted long tracts of both narrative and dialogue to these explorations, which end up feeling more like reportage than lived experience. Characters are forced to give lengthy expository speeches that, though they paint a vivid picture of the country, form a less well defined image of those speaking them. An example:

Bosaso’s current disorderliness has as much to do with the beleaguered nature of a city in a siege as it does with the undeveloped state of the economy, the overwhelming poverty, and the dysfunction of the autonomous state. The city is home to a large influx of migrants from Ethiopia, Eritrea, and Tanzania, all wanting to brave the seas in flimsy boats to Yemen and Europe, courtesy of the human traffickers who get paid to exploit their stowaways.

Too many of the people we meet in Crossbones talk this way, and so we know the country far better than we know the characters moving through the story.

Despite this, the power of Crossbones is undeniable. Violence, death, and grief stalk the novel and its characters as they infect Somalia itself, and they remain heartbreakingly topical. A suicide bombing in early October by al-Shabaab, an offshoot of the ICU, left between 60 and 100 dead, many of them students. But days later, thousands of residents of Mogadishu came out to protest the attacks, the largest demonstration seen in years. If the Arab Spring is making its way to Somalia, we can expect to find Nuruddin Farah standing ready to chronicle this latest chapter for us and to bring his readers back, as Malik says, to “a place to which I have never been before.”