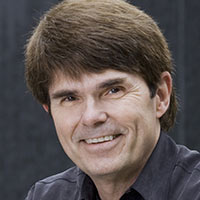 “Although I once resolved that I would never write a series character, I have now written six full-length novels and one short novel featuring Odd Thomas, a young fry cook who sees the spirits of the dead that are reluctant to pass over to the Other Side. I have also said that I (1) would not eat another cookie until I lose five pounds; (2) would never again buy magazines I don’t want from cute neighborhood tykes selling them to raise money for a school trip; (3) would never tweet on Twitter; (4) would never wear a baseball cap with a funny message on it — but I have done all those things. (The message on my baseball cap is “In dog years, I’m dead.”) I am as unlikely to keep a resolution as Wile E. Coyote is unlikely ever to catch the Road Runner.

“Odd Thomas evidently appeals to readers regardless of age or culture, because I have received tens of thousands of letters about him from all over the planet, from those as young as twelve to those as old as ninety-six, and his adventures have thus far sold over twenty-two million copies worldwide. Readers like his stalwart nature, his courage, his sharp sense of humor–but the primary Odd Thomas virtue that seems to appeal to them is his deep humility. Indeed, over seven novels (and one more to come) he is on a journey toward absolute humility.

“If Odd were to recommend five books, I think he would be most attracted to those in which one of the lead characters overcomes narcissism, materialism, and arrogance and is given the grace of humility. In no particular order, they would be:”

A Christmas Carol
By Charles Dickens

“Ebenezer Scrooge believes in nothing but making money, keeping the money he makes, and guarding against the slightest charitable impulse that might deplete his fortune by so much as a penny. A Victorian Gordon Gekko. The visitation of three ghosts shakes him to his core and reminds him that all fortunes and all men will in time turn to dust, bringing him to a humility that inspires him to give solely for the sake of giving.”

“Young Pip learns nothing from the example of his good-hearted and humble brother-in-law, Joe Gargery, who raises him. When he comes into a great amount of property from an unknown benefactor, he increasingly sees himself as a gentleman who has deservedly risen above his low station and develops such an elevated sense of himself that he is destined to crash hard. But in the crashing, he learns that the humility of Joe Gargery assures more happiness than high social standing and property.”

“This lyrical and exhilarating novel is about many things, but it qualifies as a novel dealing with the theme of humility because it celebrates the small moments of life, the grace and glory of the quotidian. It reminds us that time is remorseless; that our lives are grand only in the sense that the creation of which we are an integral part is grand in the uncountable small wonders of which it is composed.”

“Ahab’s obsession with vengeance for what the white whale has done to him is really rage against God. There is no humility in him, and by the end of the novel, that missing virtue assures his destruction.”

The Road
By Cormac McCarthy

“No other post-apocalyptic novel has so completely destroyed the world or so effectively suggested that the ultimate fall of humanity would have the same cause as the fall of the angels: pride. No other novel of this genre has brought its lead characters to such desperate depths of helplessness. Bleak as it is, however, it ends with a quiver of hope. That hope has its genesis in the absolute humility that has been instilled, by virtue of their experiences, in the boy and in the couple who take him in.”