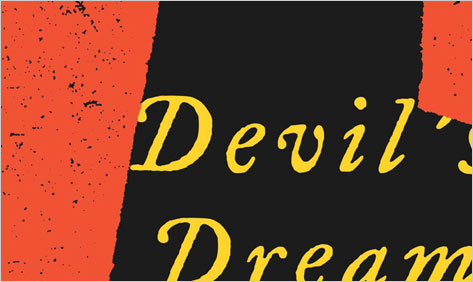 At first glance, Madison Smartt Bell’s Devil’s Dream is the model of an early 21st-century literary historical novel. Written in supple, handsome prose, it examines a morally ambiguous real-life figure — the legendary Confederate general Nathan Bedford Forrest — whose life provides the opportunity to ruminate on such important issues as race and war. The tone is pervasively serious, and the narrative is chronologically chopped up and rearranged, making it somewhat difficult to follow, though not fatally so. (There is a plot-point justification for this choice, but surely part of the idea behind it is that literary fiction ought to be a bit “hard.”)

Underneath that veneer of genteel, grown-up artistry, though, lies the throbbing heart of a boy’s-own adventure yarn or an action movie. Devil’s Dream is essentially a mash note to Forrest, a bona fide military genius who did cut a mighty gallant figure. Born to a poor Tennessee farmer, notoriously foul-mouthed and hot-tempered, Forrest enlisted in the Confederate Army as a private and left as a lieutenant general. He was a natural leader, famous for his courage, ingenuity and stamina in battle as well as for having 29 horses shot out from under him and exacting a Yankee death for each lost steed. He once single-handedly charged into a Union cavalry brigade (he’d overshot his own men) and then, with a musket ball lodged in his back, fought his way out, using the corpse of a Union infantry man propped on the back of his saddle as a shield. There are some experts who think the South might have won the Civil War if Forrest had been put in charge of things.

All of the above makes this American Achilles an understandable object of hero worship. But Forrest was also a former slave trader accused of presiding over the slaughter of black prisoners of war during the Battle of Fort Pillow in 1864. After the war, he was a member and probably a leader of the Ku Klux Klan; he claimed to have called for the organization’s dissolution in 1869 after being dismayed by its excesses. Monuments erected to his memory in Tennessee are denounced by African-Americans and others who feel that his successes on the battlefield do not excuse his failings as a human being. Forrest partisans — foremost among them the historian Shelby Foote — insist that he was not only blameless for the Fort Pillow massacre but actually intervened to stop it and that statements he made after the war indicate he held progressive racial attitudes.

Bell has pitched his tent firmly in Foote’s camp. The Nathan Bedford Forrest of Devil’s Dream is a man of almost superhuman courage and integrity, adored (if occasionally feared) by his men, and fearless in war. Like Dirty Harry and countless other cinematic crusaders, he chafes under the command of less able and daring supervisors — notably Gen. Braxton Bragg, whom an exasperated Forrest insults both by letter and in person. A man of the people, unlike the snobby West Point eggheads he rails against, Forrest never asks his men to face perils he’s unwilling to confront himself. The less savory aspects of his character either contribute to his triumphs — like the berserker rage that possesses him during battle — or amount to endearing quirks, like his propensity for epic bouts of swearing. Yes, he keeps one of his slaves as a mistress, fathering two children by her, but Bell depicts Forrest as putty in the hands of this temptress and scrupulous about obtaining her consent (“He didn’t want that skirt to be to be raised to his eyes till she might be willing to lift it for him herself”). Forrest truly loves and respects the woman, you see.

If the above sounds just a tad too rosy, Bell does seem aware of the problem, and attempts to shore up his view of Forrest by assembling reliable witnesses. Much of the novel’s action is viewed through the eyes of Henri, a mysterious Confederate recruit of mixed racial ancestry who claims to be the son of Touissant L’overture, the leader of the Haitian slave revolt of the previous century, looking to foment a similar uprising stateside. (Three of Bell’s earlier novels are set during the Haitian revolt.) Henri appears too young for this story to be true, but since he can also see the future, the spirits of the dead and voodoo gods, he has a pretty tenuous claim to realism to begin with. Henri, along with a handful of other black characters (a slave who enlisted after Forrest promised him freedom, Forrest’s son by his mistress and a devoted personal servant), has been given the job of observing Forrest close up and vouching for his honor to the skeptical modern reader. “I seen him give his word to a black man same as he would to a white and ain’t never seen him break it,” says one of the slaves stoutly. “Bedford Forrest is a man I can follow,” explains Henri to a white soldier who asks why he’s fighting for the South. “I don’t know if I can really tell you why that is.” No kidding.

No doubt these vindications of Forrest would have turned out more convincing if they were truly the point of Devil’s Dream. Instead, for all the space they take up, they resemble the perfunctory grace people rattle off before digging into Thanksgiving dinner. In the case of this novel, the feast consists of Bell’s battle descriptions, which, depending on the reader’s personal tastes, will either justify the entire book or bore to stupefaction. There are those who live for stuff like “the road was embraced by bends of the Harpeth River, one of which the Federal General Stanley had unexpectedly crossed, overrunning Freeman’s hastily formed battery before he could get off a shot, then moving into Armstrong’s rear. The Confederates would have been set for a route if Forrest had not rallied his escort to charge back on the attackers.” Readers with that particular appetite will find it amply gratified in Devil’s Dream. Those who’d prefer a sterner scrutiny of one of the South’s most celebrated sons will have to wait.

Laura Miller helped to co-found Salon.com in 1995 and is currently a staff writer at that publication. Her reviews and articles appear in the New York Times Book Review, The New Yorker, The Los Angeles Times, The Wall Street Journal, and many other publications. She is the author of The Magician's Book (2008) and the editor of The Salon.com Reader's Guide to Contemporary Authors (Penguin, 2000).