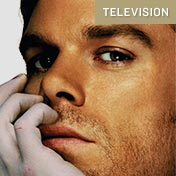 Who ever heard of a serial killer story where you root for the murderer? Dexter, which began its third season on Showtime this September, turns its viewers morally upside down — but it’s weirdly compelling. What makes the show work? First, Dexter is no ordinary sociopath. Taught by his policeman foster father to channel his urge to kill, he grows into a vigilante who kills only other murderers. We identify with the power of revenge — and rationalize the fact that Dexter’s victims are worse than he is, even as we witness the kills and participates in Dexter’s blood fetishism. Second, Dexter has humility. Rather than feeling superior to emotionally frail human beings (à la Hannibal Lecter), Dexter describes himself as “hollow” and “damaged.” Disguised, in effect, as an ordinary human being, he tries to figure out what regular people do in regular situations — like cuddling on the couch with his girlfriend. Jeff Lindsay keeps his monster at an ironic distance in the 2004 novel that gave rise to Dexter, but the television series humanizes him. The first season chips away at his icy image, and the second finishes the job. Dexter protects his girlfriend from her violent ex-husband and effectively takes his place (he’s just great with the kids). And revelations of his own family origins literally stun him with their emotional power. In the end, Dexter makes sense not so much as an emotionally isolated serial killer as a family man with an odd hobby. It’s a tribute to this unusual saga that he can somehow be both.