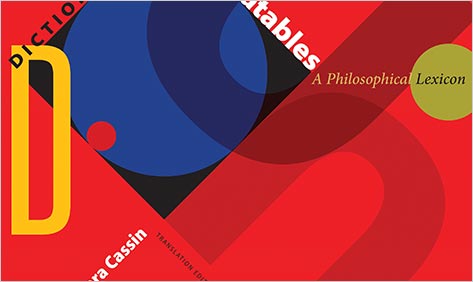 A friend once remarked that the Korean language has no word for salad. Instead, it uses saleodu, a Korean-inflected version of the English word. It occurred to me that by that logic, there’s no word in English for salad, either — “salad” being derived from insalata from the Latin, where it names a salted dish. Defying the threat of unintelligibility, words emigrate quite happily from language to language. Loanwords, as etymologists call them, take root in a new language without much modification, retaining the flavor and frisson of their original tongue. Sometimes words find their way by assimilation, taking up residence as “calques” or direct translations from one language to another; “scapegoat” is an example, remade in rough, apostrophe-sprouting sixteenth-century English by William Tyndale from the Hebrew text of Leviticus. “Calque” is one such loanword; “loanword” itself, from the German Lehnwort, is also a calque.

Although purists and prescriptivists are always seeking the aboriginality of language, the tongues themselves are promiscuous, happy in one another’s company. “All words are fossil poetry,” Emerson declared, and by the same light, all words belong to someone else. Any cosmopolitan discourse makes use of the untranslatable, comprising a buzzing, evanescent community of idiolects, jargons, and lingue franche. The Internet is, of course, a marvelously efficient loanword generator. Take a term like “Net neutrality,” which finds itself abducted into debates across formerly loanword-resistant languages. From the French edition of PC World online, for example, we have the following usage: “Le principe de Net Neutrality est simple: Internet ne doit pas favoriser, ni pénaliser, certains contenus par rapport aux autres” (where “Internet,” too, is an untranslatable). At Le Figaro, we find the untranslatable corralled in a parenthetical: “Cette question, qu’on appelle la «neutralité des réseaux» (Net neutrality), est récurrente depuis plusieurs années sur le web.” This usage is found at Le Figaro‘s tech blog — the title of which is “Suivez le Geek.”

Words in Princeton University Press’s new Dictionary of Untranslatables are more rarefied than those used in Internet coverage or international cuisine. Subtitled “a philosophical lexicon,” this massive tome seeks to capture, chart, and explain shifts in the usage of philosophical terminology in the ever-flowing river of Occidental philosophy emerging from classical antiquity, winding out of the European Middle Ages through the Renaissance and the Enlightenment, splitting into streams of continental and analytic schools in the postmodern era.

As Barbara Cassin writes in the Preface, translation relies on “the suggestion of an always absent perfect equivalence”:

Nothing is exactly the same in one language as in another, so the failure of translation is always necessary and absolute…. This proposition rests on a mystification, on a dream of perfection we cannot even want, let alone have. If there were a perfect equivalent from language to language, the result would not be translation; it would be a replica. And if such replicas were possible on a regular basis, there would not be any languages, just one vast, blurred international jargon, a sort of late cancellation of the story of Babel.

The Myth of Babel is a story told by states, which tend to prefer their citizenries monolingual. And yet polyglossic diversity is the habit and the habitat of languages. There are more than 6,000 tongues spoken on the planet today (although more than half of them surely will die out by century’s close). For much of history, most humans have been multilingual. In the context of modernity, linguistic virtuosity is the mostly the province of scholars; it’s a delicious irony that in this respect (and not only this respect), the academy is strikingly similar to the kind of small-scale society anthropologists once called “primitive.” Among academic tribes, the number of linguistic friends and relations is small: while Papuans speak a thousand or so languages altogether, the Dictionary of Untranslatables considers the tiny but piquant bouquet of world languages with impact in academic philosophy: Arabic, Basque, Catalan, Danish, English, French, German, Greek, Hebrew, Hungarian, Latin, Polish, Portuguese, Romanian, Russian, and Spanish. Great disparities in power and reach separate even these enduring languages. The Dictionary demonstrates how much vitality and endurance these languages gain from the dialogue they engage in with other world languages — a dialogue structured and catalyzed by relations of power. To the famous formulation of linguist and Yiddish expert Max Weinreich, we might add that a language is a dialect not only with an army and a navy, but with an academy as well.

As the Dictionary of Untranslatables amply documents, the academy’s effects on language are every bit as far-reaching as those of colonialism, trade, and pop culture. The etymologies here are at once precise and profligate, proliferating across terms like Abstraction and Acedia, Drive and Disegno, Erscheinung and Essence, Melancholy and Mimesis, Praxis and Pravda — the latter a word that “designates not only truth but also justice” and, through its association as the title of official Soviet newspaper, became “philosophically off limits in its own country,” a word with a narrative “marked by exile, solidarity with persecuted minorities and refugees…and Russophilic worldviews.” The struggle for clarity appears nowhere in ideal form but is always a thing unfolding in the world, a compound of ideology, politics, oppression, fear, desire — of all that is lost, and found, in translation.

And yet, the Dictionary contends, this unfolding struggle is the vital condition of language. Cassin emphasizes “the mobile outlines of languages assuming a national silhouette or subsiding into diffuse, polyglot worlds”; instead of a “mausoleum of concepts,” the Dictionary is a “cartography of linguistic diaspora, migration, and contested global checkpoints from early empires to the technologically patrolled and surveilled post-9/11 era.”

This cartography can be rich and complex, even with a familiar concept like “liberty” — specifically, the ancient Greek word eleutheria, variously translated as liberté, Freiheit, and “liberty” or “freedom” in English. The Dictionary discusses the mistaken traditional Greek etymology — which, in a tradition that antedates Aristotle, associated eleutheria with freedom of movement (via the phrase elthein hopou erai, or “going where one likes”). In fact, the Dictionary tells us, the concept emerged from the Indo-European radical *leudh — meaning “to grow or develop,” which serves also as the basis for the German word for “people,” Leute. At its root, “liberty” wasn’t about revolutionary emancipation from constraint but about rootedness in nature, an empowering sense of belonging, and “the idea of growth that leads to a complete form, which ends in its full flourishing.” This origin doesn’t give the lie to later terms in other languages — the Latin libertas, with its long history evoking “the idea of pure spontaneity” and “the notion of a will that is not in any way determined to choose one or another of two contraries,” which finds its way into French and English through ideas of self-determination. These, too, are part of the “philosophically weighty” history of eleutheria, which the Dictionary encourages us to understand in all its variety, without “homogeniz[ing] the diverse meanings and flatten[ing] the richness of Greek.” “Liberty,” it turns out, is much more than a mere calque from the Latin.

Narrowly considered, “translation” itself is a calque, also carried over from the Latin, where translatio is “to carry over.” The uncanny, necessary impossibility of translation has long fascinated philosophers. “The greatest translation,” wrote Walter Benjamin, “is destined to be taken up into the growth of its language and perish as a result of its renewal.” And yet as the Dictionary points out, “even relatively simple words chase each other around,” perpetually, surprisingly, conversationally. We struggle with poetry and abstraction, the force of eloquence and the ambiguity of utterance. Meanwhile, languages go on speaking to one another.