Edward Said: The Charisma of Criticism 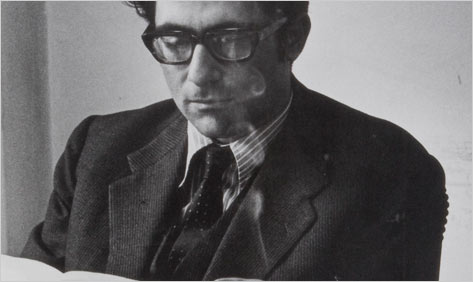 It can be difficult to put all the pieces of Edward Said together, even now, seven years after his death. He was large, he contained multitudes: both Palestinian and American; both a professor of comparative literature at Columbia University and a music critic for The Nation; both a president of the Modern Language Association and a prominent spokesman for the Palestinian National Council. Said was among the first literary scholars in the United States to champion the new ideas coming out of European debates about language and literature, and his 1978 book Orientalism made him one of the founders of postcolonial studies. But he was also scathing about how academic cultural theory tended to turn into its own playground—a substitute for engagement with the world. He was an ardent critic of U.S. policy in the Middle East, but also of the Palestinian Liberation Organization when it disappointed him. He enjoyed a certain reputation as a polemicist; and enjoy it he certainly did. I suppose that is how he is most often remembered now.

A reputation, though, can be misleading even when it is valid. Said was never just a polemicist. Even to think of him primarily as an “engaged” intellectual (that is, one defined by specific activist commitments) seems a bit one-sided. While by no means a cultural conservative, he had a deep streak of bourgeois humanism—an investment in Western cultural and intellectual traditions that ran even deeper than his passion for its classical music. In certain moments he was closer to Lionel Trilling than to Franz Fanon. Yes, he denounced the mentality through which European and American leaders placed themselves at the center of human history, and assumed their own entitlement to control the world. But Said’s critique of imperialism was the product of his own very self-conscious and self-critical variety of Eurocentrism.

And so, two or three generations of young radical intellectuals have now had the pleasure of discovering that they are ever so much more radical than Edward Said. It must be very pleasant for them, but none of them has yet amounted to a replacement. With H. Aram Veeser’s Edward Said: The Charisma of Criticism, we have a different sort of Oedipal drama on display. The stakes are less political than personal. It is an insightful book, but also a strange one, charged with an ambivalence towards its subject that is perhaps as intense as Said’s toward the works he discussed in Orientalism or Culture and Imperialism.

Part biography, part critical study, part memoir, this is the work of someone who has spent decades reading and thinking about Said—but also yelling at him, at least in his head. Admiration and hostility are blended together so thoroughly that one doubts even the author can tell them apart. Insight and grievance jostle for space. The familiar apparatus of academic writing (citations, endnotes, bibliography) just barely holds the volume together. This seems appropriate: most of Said’s own books were collections of essays, or so loosely organized that they might as well have been. Even in its peculiarities, Edward Said: The Charisma of Criticism is an homage to its subject.

It is also the record of a relationship—one best characterized, perhaps, by that Facebook phrase “It’s complicated.” As a freshman at Columbia University in 1968, Veeser sought out Said as an advisor. He had been aware of the suave and enigmatic professor even before reaching campus when the friend of a friend, reeling from some romantic entanglement with Said, called him “the bastard.” As a graduate student, Veeser continued to take classes with his mentor, and at some point set out to work on an intellectual biography with Said’s blessing.

The effort would have been difficult in any case—even if Said, as an individual, were not. Alas, the great man could be thin-skinned and vindictive. Taking offense at an imagined slight, he withdrew his cooperation and discouraged others from answering Veeser’s questions. (Without turning this review into a memoir of my own, I can confirm, from personal experience, that Said could go from charming to rageful at astonishing speed, and was not averse to pointing out that he was a distinguished and powerful figure who might at least consider the possibility of destroying you, if he could be bothered to find the time.)

A reconciliation eventually came to pass, or at least a cease-fire; but the damage was done, and not simply to the biographical project. It is clear that Veeser’s idealization never quite recovered. Recollections of the various stages of this fraught interaction appear at the end of each chapter. There are inset boxes or sidebars throughout the book presenting chunks of transcript from Veeser’s interviews with Said’s friends and colleagues (raw material for the biography, and raw much of it certainly is). Another layer of the text consists of critical reflections on Said’s work and public persona, with a particular focus on the question of how he asserted and sustained his authority.

The key term on that score is “charisma”—borrowed indirectly from Max Weber’s work on the sociology of religion, where it applies to those rare figures  (Jesus and Mohammad are examples) who do not simply draw on the established doctrines and rituals of a tradition but create new institutions around their more direct access to the sacred.  This is a rather more stringent notion of charisma than suggested by the contemporary American usage, in which it applies to people who are either personally charming or on TV a lot, preferably both.

Veeser’s borrowing of the concept here seems to split the difference between sociological jargon and Entertainment Tonight. Said’s influence as critic and activist did not come from communion with some transcendental power, but from occupying positions within such worldly bodies as Columbia University and the Palestinian National Council. At the same time, he was critical of those institutions. His charisma was a matter of claiming to have greater access to (and so to embody) the values of academe or an emancipatory movement than any institution did.

As it happens, Said was also personally charming and went on TV a lot. He was, as Veeser points out repeatedly, an “academostar”—a recent and fairly cloying label for the small-beans celebrity of university life. Without engaging in the sort of detailed criticism of Said’s scholarship found in Robert Irwin’s Dangerous Knowledge: Orientalism and Its Discontents (the book is not even cited), Veeser maintains that his former professor “became an intellectual celebrity” by turning his weaknesses into strengths. “The impulsiveness and subjectivity that appeared evocative but untrustworthy in [his] literary studies gave him tremendous presence on mass media, in auditoriums, and in the press. His strength lay in those two long-neglected planks of the rhetorical curriculum: memory and delivery. His charisma grew, and his audience grew with it.”

There are enough small-scale insights into various aspects of Said’s work—and, alas, enough home truths about his porcupine-like personality—to make Veeser’s book worth reading. It is a corrective to some of the more fawning tributes that have appeared in recent years. All the more striking, then, that a critic who can mock Said for moments of sonorous emptiness in his prose can end his portrait with a few pages on the “dignity of teaching” and “personal glamour” and “inseparability of personal and political liberation” characterizing his former professor. This is not a definitive study of Edward Said; it may be some time before one is even possible. But it certainly conveys the complexity of attitude and feeling that he inspired in one devoted reader over several decades. Ardor can be hard on you.