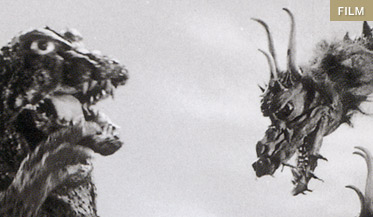 In August Ragone’s charming, colorful and comprehensive biography, Eiji Tsuburaya: Master of Monsters, there are numerous photos of Ragone’s auteur subject, the Japanese SFX genius and “father” of Godzilla, Ultraman, Mothra, and scores of other well-loved cinematic and televisual creations, bestriding his insanely detailed miniature sets like a deity, as large as the various rubber-suited antiheroes clustered around him. With his trademark fedora and dapper suits, cigarette perpetually alight, Tsuburaya is the epitome of artistic cool, looking more like a member of the Rat Pack or a Miles Davis compatriot than any salaryman. Exhibiting keen instincts for outrageous visuals, a sense of mythology worthy of Joseph Campbell, a direct line to the zeitgeist, and the inextinguishable playfulness and fecund ingenuity of the ten-year-old who, upon seeing his first film in 1911, immediately constructed his own toy projector, Tsuburaya (1901-70) had a hand in over 150 films during his long career, engendering fond memories of monster marathons in several generations. Ragone’s text delves minimally into the psychodynamics and day-to-day family life of Tsuburaya, instead focusing on his professional accomplishments; it sings the litany of one lovingly handcrafted monster after another, created first for Toho studios, and then for Tsuburaya’s own production company. One suspects that this particular spotlight on the workaholic Tsuburaya is the most accurate and flattering, and it certainly makes for an engrossing narrative. Several sidebars by experts and comrades of the man cover everything from the feedback loop of American-Japanese-American cultural borrowings to the raft of collectibles spawned by Tsuburaya’s dreams-made-latex. The enigmatic smile on Ultraman, we learn, derives in part from the smile of Kannon, a Japanese Buddhist bodhisattva of compassion. I suspect some of Tsuburaya’s own glee is blended in as well. –

Previous Previous Post: The Telephone Gambit: Chasing Alexander Graham Bell's Secret
Next Post: Gang Leader for a Day: A Rogue Sociologist Takes to the Streets Next