Empires of the Indus 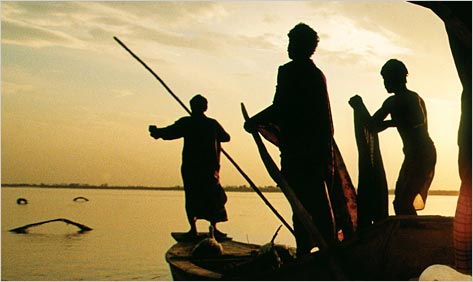 I plan to be away from Thatta for a day. The Sheedis at [the welfare organization], however, assume that I am staying throughout the marriage season — or at least until all girls of marriageable age in the office have been betrothed. They present me with a red tie-dyed shalwar kameez, see off my taxi driver, and I am ushered along the town’s back streets to my new accommodation. “But all my spare cash is in Thatta,” I say to Iqbal. “We can lend you some money,” he says. “Is there anything else you need?” Thus begins my residence in Badin, one that will last for five weeks, until the start of the Islamic month of Muharram.

It is such moments that unite the work of our great intellectual travel writers — literary wanderers like Patrick Leigh Fermor, Bruce Chatwin, and William Dalrymple, who went in search of ideas as much as any particular place. And so Alice Albinia (who writes beautifully enough to not color when being listed in such company) is taken into a home in Badin and so she is swept through Pakistan, India, Afghanistan, and Tibet: learning as she goes the questions to ask, often after the answers are already clear.

Fluent in Urdu and Hindi, Albinia set off to follow the 2,000 miles of the Indus River: from Karachi through Sindh, the Punjab, the Northwest Frontier Provinces (NWFP), Jammu, Kashmir, and on to the river’s source far into Tibet. Tim Butcher made such a journey along the Congo River in his prize-winning Blood River (2008). But where Butcher, a newspaperman, focused on his personal experience of the country’s decrepit conditions, succumbing to the dangers of traveling in darkest Africa, Albinia perseveres and through scholarship creates a magical history of the Indus Valley. She sticks to her plans for a slow journey in some of the world’s most dangerous country: asking the Afghan policemen ordered to escort her by car through one part of the NWFP to let her walk — which they do when she promises to sign in at a police station each day — and hiding at the worst stretches in a burqa; trusting herself to random individuals who almost always validate her faith; even detouring 850 miles to reconnect with the river in Chinese-occupied Tibet when she cannot cross India’s militarized border in Ladakh.

It is an epic journey, but the troubles are worn lightly, as is the author’s learning. She brings to life the many civilizations that have collided around the Indus and ponders some of the most evocative figures of the past — Alexander, Ashoka, and Aurangzeb; Babur, Timur, and Jinnah — guiding us from Mohengodaro to the Moghuls and the Raj and on to the tragedy of Partition and the unending hostility between India and Pakistan. Albinia has the scholar’s bent, but one alleviated by the enthusiast’s touch of pure pleasure:

With their pantheon of gods, night-time harvest-dances and cowrie-shell headdresses, the Kalash have so far held out against history’s homogenizing tendencies. Instead, their distinctiveness has roused a chorus of noisy speculation. During the past century the Kalash have been hailed as Slavs by Russians, Alpine shepherds by Italians, Alexander’s children by Athenians, and Englishmen by maverick colonials (albeit in a story by Rudyard Kipling). Now the Pakistanis, following boldly where European anthropologists went before, have proclaimed them the key to India’s Aryan mystery.

Despite the seductions of the historical, Albinia never strays far from the people she meets and whose story she is ultimately telling. A sewer cleaner seen in Karachi allows her to examine the role of class in the founding of Pakistan — low-caste Hindus had to be forbidden from emigrating in 1948 as toilets weren’t being cleaned or the trash picked up. The Sheedis of Sindh, descended from African slaves, inspire a consideration of race in India and Pakistan. Albinia encounters religion everywhere: the pre-Hindu rites of the Kalash, separatist Sikhs, numerous syncretic versions of Islam and Hinduism, frightening fundamentalism, even placid Buddhists surviving amidst all the competition. Near the end of the journey, Albinia visits the sacred Mount Kailash, from which four of the continent’s great rivers flow — the Indus, the Sutlej, the Karnali, and the Brahmaputra: “Where the four rivers begin, four faiths — Bon, Buddhism, Jainism, and Hinduism — congregate in pilgrimage.” She circumnavigates the mountain, a lengthy rite “obliterating the sins of a lifetime.”

Albinia despairs at the Indus’s great peril. Dammed repeatedly to provide irrigation and fresh water, the river completely disappears in places, or slows to a puddle-like trickle. At its mouth the siphoning off of the fresh water has caused the Arabian Sea’s saline to destroy the delicate eco-system of the mangroves and all agriculture.

For how long will the waters continue pouring forth? The river is slipping away through our fingers, dammed to disappearance. The Atharva Veda calls the Indus saraansh: flowing for ever. One day, when there is nothing but dry riverbeds and dust, when this ancient name has been rendered obsolete, then the songs humans sing will be dirges of bitterness and regret. They will tell of how the Indus — which once ‘encircled Paradise,’ bringing forth civilizations and species, languages and religions — was, through mankind’s folly, entirely spent.

Though Albinia’s sadness is real, the book is no environmentalist plea, but a celebration of lands, antique and new, of the Indus Valley and their peoples. Its greatest achievement is to humanize Pakistan, a country written about constantly in the Western press but about whose ordinary citizens we know next to nothing. Empires of the Indus manages to make plain the human tragedy behind decades of tyrannical rule and the recent uptick of extremism. It is this that makes a beautiful book more than the sum of its parts.

The future of travel writing has been called into question of late with some of the older practitioners wondering whether the world has just grown too close. The success of books like Christopher de Bellaigue’s Rebel Land and Suketu Mehta’s Maximum City has led some to suggest that the tradition will best prosper in deep portraits or in journeys in spirit rather than in distance. But Empires of the Indus reaffirms the traditional forms. They have become only more important as the world has gotten smaller. Busy as we are, we accept shallow globalized interpretations of the wider world. The bubble can best be punctured by someone treading the ground at a private pace.