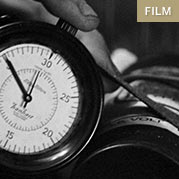 Of the select number of serious contemporary directors whose work is scrutinized in the international press, Lars von Trier (b. 1956) is one of the most polarizing. While even his detractors will concede that he possesses a virtuoso’s command of cinematic technique, it’s hard to make a case for his subtlety. Von Trier is given to creating emotionally blistering movies that pirouette around an idealist who is obliterated by a hostile environment. Such is the premise on which his 1991 cinematic nocturne, Europa, rests. Purposefully intended to be one of the Danish director’s most accessible movies, Europa tells the story of Leopold Kessler (Jean-Marc Barr), a young American of Germanic heritage who, in October 1945, travels to Germany to take up a position as a sleeping-car conductor on a train. Proud of the fact that he refused to take sides during the war, he represents himself as a conciliatory figure who wishes to further the restoration of German-American relations. Unlike von Trier’s more harrowing movies, like Breaking the Waves, Europa contains a generous amount of levity, which helps because the film’s symbols do come on strong, particularly in one scene that juxtaposes sex and death. Nonetheless, von Trier’s use of the sleeping-car as a metaphor for Europe’s desire to whitewash its recent past remains piquant. So is the film’s use of meticulously paired foreground and background shots to produce collages as mesmerizing as nearly anything captured on celluloid.

Previous Previous Post: Panic! The Story of Modern Financial Insanity
Next Post: Hurry Down Sunshine: A Memoir Next