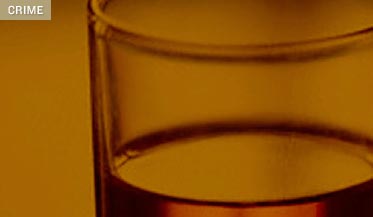 Mulish and melancholy, Detective Sergeant John Rebus of Edinburgh’s CID first made himself known to the world 21 years ago in Knots and Crosses, Ian Rankin’s second novel. Forty-one years old, divorced, unkempt, bulky, a human filtration system for smoke, booze, and caffeine, Rebus was and still is haunted by scenes from a murky past in the army and ruthless training in the elite ranks of the SAS. Elevated long ago to the rank of detective inspector, he is a veteran of 16 novels, the dark star of countless sordid investigations, and a scourge to overbearing superiors. Through soul-drenching drizzle and “smirr,” Rebus has prowled Edinburgh’s mean streets, docksides, vandalized council estates, and sleazy clubs. Here is the other side of “The Athens of the North,” scenes of neglected children, delinquent adolescents, and brutalized men and women, of drugs, prostitution, and pornography — and lousy food: Looking at the interior of a car in Black and Blue, the eighth novel in the series, Rebus reflects on this iconic tableau, “chocolate wrappers, empty crisp bags, crushed bricks of orange juice and Ribena, the heart of the Scottish diet: sugar and salt. Add alcohol and you had heart and soul.”

D.I. John Rebus is, in fact, the most famous protagonist of what is now called “Tartan Noir.” But, alas, after all of it, after repeated suspensions from duty and bruising encounters with underworld lowlifes, after putting the collar on criminals of every stripe, from wide boys to high muckamucks, Rebus has arrived at mandatory retirement. Now, here is Exit Music to see the man off?or out?or away?or?something. It’s 2006, and Inspector Rebus is finished: that’s official. But whither Rebus the man? That is the question that grows as the pages dwindle in this, the old campaigner’s 17th outing.

In one sense, at least, the series has come full circle, for the book begins just as the first one did: “The girl screamed once, only the once, but it was enough.” With that, the similarities between that alpha and this omega fade. Rebus is no longer the isolated, self-conscious literary entity he was in Knots and Crosses, where plot and denouement were tightly wrapped up with his harrowing past and traumatized psyche. Though still introspective, he is more ample in every way, possessing a chronicled past and living in a fully realized world peopled by a cast of familiar characters. Despite the addition of a career’s caseload of hard-core grief, Rebus’s former angst has evolved into a more bracing belligerence and a sense of what is ridiculous in himself. The early Rebus, for instance, would never have been able to relax his grip on self-torment and laugh at himself as the present one does: ” ‘Bit maudlin tonight, are we John?’ he asked himself out loud. Then gave a little chuckle, knowing he could maudle for Scotland.”

The book, like the last few, finds Rebus feeling his age and obsolescence. Not only does retirement lie mere days ahead, but as if to underscore the detective’s status as a relic, the grandson of a man he put away in prison has joined the police force. To be sure, in a remarkable burst of would-be cutting-edge savvy, the canny Rebus does snap up signed copies of a just-killed poet’s last book, mouthing, to a fellow detective’s considerable bemusement, “something very like ‘eBay.’ ” Whoa, John! Still, predictably enough, computers annoy him, DNA analysis is a closed book, and he is, at best, made thoughtful by the ubiquity of CCTV — one camera for every dozen citizens of the United Kingdom. What is more, the problem of finding a place to park in Edinburgh has now been joined by the even more dispiriting one of finding a place to smoke.

The case that launches the inspector’s last outing begins with the death of the poet just mentioned, a Russian dissident. Persona non grata in his own country, he is found bludgeoned to death near a parking garage on a desolate street in Edinburgh. Elsewhere in the city, Russian fat-cat investors are being courted by suave Scottish bankers and high-level politicians. This is the New Scotland of global business; even gangland boss Big Ger Cafferty, Rebus’s nemesis, has moved into apparently legitimate areas, cooking up some deal with yet another Russian, Sergei Andropov, a renegade operator on the outs with Russian authorities. Is the poet’s death connected to all this? Or to the poisoning of Alexander Litvinenko in London, news of which is now breaking? “It wasn’t so much the underworld you had to fear,” reflects Rebus, “as the overworld.”

Mind you, there’s still plenty of danger emanating from the seamier side of Edinburgh. Pornography and drugs have their role, in this instance dragging a few of the better sort into their snare. Another death, this one the consequence of arson, darkens the picture further. Meanwhile, tension over Rebus’s retirement mounts. There is unpleasantness and jockeying for position back at the station. His longtime colleague and friend Detective Sergeant Siobhan Clarke looks to be his likely successor and is, in fact, put in charge of the dead-poet case, with Rebus playing second fiddle — not an instrument he handles with particular grace. Happily, he is soon enough — and true to form — suspended from duty, which, as usual, loosens things up between the two detectives. It does not, of course, interrupt Rebus’s sleuthing, nor does it interfere with his obsession with Big Ger, whom he would dearly love to bring down before bidding police life adieu.

My lips are sealed on that score and much else. Suffice it to say, the denouement — though not quite the word — of Rebus’s contest with Big Ger is strange and unexpected. I will tell you this, however: You cannot convince me for a minute that this is the last of John Rebus. No, sir. There’s miles — kilometers, that is — left in him, and Rebus Redux is surely on the cards. On the other hand, to quote another Scot, Robert Burns, “There is no such uncertainty as a sure thing.”