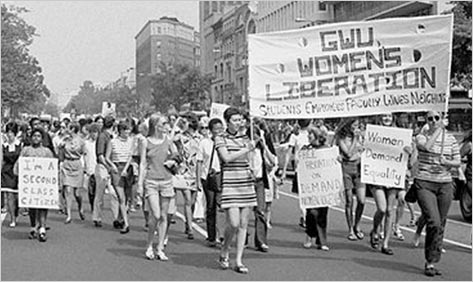 A professor of mine once described history as “change over time.” But history is also how we talk and write about that change: what we choose to include, whose stories we tell, the lenses we use to define our vision.

Feminism Unfinished attempts to observe a century’s worth of U.S.-based feminist movements through both wider and longer lenses. A set of three essays, each by a different academic, rather than a fully integrated study, it is at once profoundly ambitious and necessarily sketchy.

The book’s essential aim is to discredit the idea that American feminism can be reduced simply to waves that have crested and receded. While acknowledging backlash and flux, the authors emphasize continuities, in part by redefining other social movements — including the labor and civil rights movements — as vehicles for feminist activism. “Feminism was integral to larger progressive changes, with the result that it has sometimes blended so entirely into larger movements that historians have not noticed it,” the prologue argues.

Feminism Unfinished also disputes the shopworn critique of feminism as a white upper-middle-class movement with little to say about the lives of working women or women of color. “It is a mistake to characterize feminism as a movement of career women,” the authors write. At the same time, they attack what they perceive as “trickle-down” feminism, piling on to criticism of  Sheryl Sandberg’s recent manifesto, Lean In: Women, Work, and the Will to Lead, for its top-down perspective. Sandberg’s book aims to inspire women to climb the corporate ladder more effectively by overcoming internal, as well as external, obstacles, and mentions the problems of less elite women only in passing. 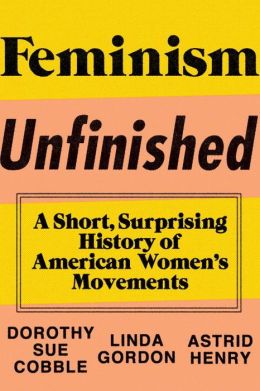 Dorothy Sue Cobble, a labor historian at Rutgers University, picks up the feminist story at the end of what is traditionally considered the first wave, with the granting of voting rights to American women in 1920. Her essay, “More than Sex Equality: Feminism after Suffrage,” focuses on women who worked primarily as labor organizers and civil rights activists during the New Deal era and beyond, introducing frequently overlooked figures such as Myra Wolfgang, Caroline Dawson Davis, Addie Wyatt, and Maida Springer. Cobble calls these women “social justice feminists” for their emphasis on the intertwined problems of women’s rights and social and economic justice.

While Alice Paul’s National Woman’s Party lobbied for the Equal Rights Amendment and formal legal equality with men, social justice feminists were more likely to support protective legislation that benefited women. And after World War II, when women were mostly ousted from factory jobs, they emphasized “recognizing and revaluing mothering and the work of the home.” Cobble dubs this ideological turn a critique of “the masculine mystique,” with its overvaluing of both “masculinity and the male sphere of employment.”

The debate was joined anew with the publication of Betty Friedan’s The Feminine Mystique in 1963, one of the spurs to so-called second-wave feminism. Cobble also cites the 1963 report of the President’s Commission on the Status of Women, which called not just for greater employment opportunities but for paid maternity leave and Social Security credits for housewives.

Linda Gordon’s essay, “The Women’s Liberation,” is a whirlwind tour of feminism from the mid-1960s to the 1980s. Gordon, a historian at New York University, emphasizes the diversity of the movement’s leadership and aims. She also highlights the contribution of “consciousness raising” — small-group, female-only discussions that explored “the hidden injuries of gender” and meshed the personal and the political.

The notion of gender as a social construct rather than a biological inevitability led to increasingly radical critiques. Some feminists, seeing men as the enemy, advocated separatism, while others invited men to rebel against the constraints of traditional masculinity. Meanwhile, the National Organization for Women continued the unsuccessful fight for ratification of the Equal Rights Amendment; the issue of pornography divided women, and, Gordon argues, “middle-class whites did not take sufficiently into account the situation of women who experience racism, low wages, ill health, and dangerous neighborhoods.”

The final essay, Astrid Henry’s “From a Mindset to a Movement: Feminism Since 1990,” is the most interesting — an effort to impose order on an unruly period that hasn’t yet receded into history. Henry, a women’s studies professor at Grinnell College, discusses how younger feminists responded to new provocations, beginning with Anita Hill’s charges of sexual harassment at Clarence Thomas’s 1991 confirmation hearings.

Initially, Henry writes, these women criticized the 1970s movement, homing in on “its overwhelming whiteness and inability to create an interracial movement, as well as its hostility to popular commercial culture.” Eventually, though, they would harness the power of the Internet to focus on “sexuality, media representation, work-life balance, and violence against women, as well as growing economic disparities.”

Henry offers Rebecca Walker, daughter of the African-American writer Alice Walker and goddaughter of Gloria Steinem, as an exemplar of third-wave feminism. But Henry also widens the lens to include such leaders as Shelby Knox, who fought for comprehensive sex education at her Lubbock, Texas, high school. The latest iterations of feminism, Henry suggests, have once again sought to link gender justice to issues of race and class, as well as sexual orientation, bringing the book’s arguments full circle.

Feminism Unfinished moves quickly — often too quickly — across the still-evolving landscape of feminism, and it is hardly the last word on the subject. But it points effectively toward new directions in research — and to the legacy of a “half-changed world” that has stopped short of assuring women an equal place in American society.

Julia M. Klein, a cultural reporter and critic in Philadelphia, reviews theater for the Philadelphia Inquirer. Follow her on Twitter @JuliaMKlein.