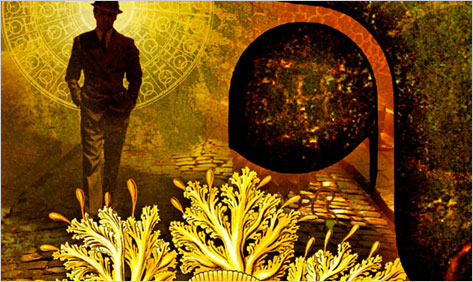 Finch, the eponymous detective hero of Jeff Vandermeer’s hallucinatory new novel, has the unenviable task of investigating a double murder where only one victim is human.  The other is a “gray cap,” member of a race of sentient fungal beings who are the occupying forces of the city of Ambergris (also the setting for two of Vandermeer’s previous books, City of Saints & Madmen  and Shriek: An Afterword).  “Occupying” is the mot juste here. Not only are humans second-class citizens of Ambergris; they’re also susceptible to colonization by the gray caps, whose infectious spores kill or, in some cases, create human-fungal hybrids.

Escalating tensions and distrust between the the city’s factions make for an interzone that’s equal parts Casablanca and Carcosa. Vandermeer’s acclaimed dark fantasies owe as much to 19th-century decadents as they do to Michael Moorcock; with this book, he expands his territory to encompass classic noir, albeit filtered through his unique visionary sensibility.  Finch trudges through Ambergris’ dank byways and criminal underground like Charles Baudelaire turned gumshoe, exposing conspiracy and treachery to the city’s fungal mist.  The mashup of dreamscape and hard-boiled narrative makes for a sublime reading experience, The Big Sleep as fever dream.  “It took a long time and a lot of patience to kill a gray cap,” Finch muses early on.  Fortunately, it takes only one mostly sleepless night for a reader to make the subterranean journey to Ambergris and back —  with absinthe and magic mushrooms optional.

Elizabeth Hand is the multiple-award-winning author of numerous novels and three collections of short fiction, as well as a longtime reviewer for the Washington Post, Salon, and Village Voice, among many other publications. Her most recent novel, Generation Loss, received the inaugural Shirley Jackson Award for best work of psychological suspense. Illyria, a Shakespearan fantasy about forbidden love between two cousins in a renowned American theatrical dynasty, will be published this spring by Viking. She lives on the coast of Maine, where she is completing a sequel to Generation Loss called Available Dark.