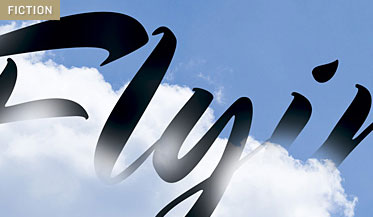 Pieter Brueghel’s Landscape with Fall of Icarus famously depicts the mythical crash of Daedalus’ son as a non-event. You remember the tale: Icarus’ father, Daedalus, the tricky nerd who invented the labyrinth for King Minos, fashioned wings of wax and feathers in order to escape exile in Crete. Flighty Icarus climbed too close to the sun, melting his waxen pinions and plunging to his death. In Brueghel’s version, indolent shepherds and toiling ploughmen fail to notice as Icarus splashes down indecorously in a busy sea lane.

According to Brueghel, our dreams and desperations are so much wax and feathers. But the ancients were kinder to Icarus; they called the stretch of water in which he was lost the Icarian sea in his memory. The Greeks also had a more hard-boiled version of the myth, in which Pasiphaë lends the father-and-son duo a boat to effect a more practical escape. In that telling, Daedalus invents sails to outpace Minos’ pursuing galleys: instead of a miraculous, hubris-fueled flight, we get the shipping business. These mythical discrepancies prompt a question: what if both versions have their roots in reality? What if Daedalus merely hinted at flight, spreading the rumor of a killer app in order to cover his maritime tracks? Perhaps Icarus, that dolt, merely fell overboard en route — a possible interpretation of the Brueghel painting, which depicts the lad tumbling into the drink beside a galley under full sail. It’s the same the kind of doublecross that Eric Kraft’s haplessly hubristic protagonist, Peter Leroy, perpetrates on the loving residents of his hometown. In Flying, young Peter rolls, stumbles, lies, and — briefly, sweetly, accidentally — flies his way through his own mythology, a home-brewed, do-it-yourself contraption of delusions, Potemkin tourist traps, and faulty memory.

For Peter, it all begins with a lie — a real ingrown toenail of a lie, a richly rotted, impacted cuspid of confabulation, an ouroboros of faulty oratory. Having convinced his parents that he has won a scholarship to a science camp in far-off Corosso, New Mexico, young Peter decides to build a flying motorcycle to travel from his hometown of Babbington, on Long Island, to the desert faraway. Following instructions he finds in the pages of Impractical Craftsman magazine, Peter builds the unlikely thing out of scavenged parts, dubs it Spirit of Babbington, travels there and back again upon it, and is crowned with laurels by the proud Babbingtonians, among whom his feats of engineering and aeronautical brio ensure his immortality. They may not rechristen Long Island Sound, but they do try to turn his Daedalan escapade into tourist bait.

When an adult Peter discovers the invention undertaken in his name, he begins looking for a way to undo the knot he’s tied in history without offending too many old friends. With us, his trusted readers, Peter is good enough to set the record straight early; by page 26, he lets us in on the game: “I flew part of the way,” he asserts. “I also taxied part of the way, before taking off and landing. I would say now…that I flew a total of about 180 to 200 feet on the way out to New Mexico. My longest sustained period of flight might have covered six feet.” While the truth outs early, its implications take a leisurely trilogy to unfold. Flying gathers three books: Taking Off and On the Wing, previously published, and the new Flying Home. That it takes nearly one and a half of those books to reach the account of Spirit‘s record flight helps to measure the labyrinthine enjambments of Peter Leroy’s story. For as Peter peers back into his fickle, fungible memory, he finds events aren’t ordered as well as he might like. With his wife and soul mate, the wise Albertine, Peter Leroy sets out on a new journey to separate truth from falsehood — only to find that they’re opposite ends of the same beast forever swallowing its own tail.

If you were to pick up a hitchhiking Jorge Luis Borges and Robert Pirsig, or to listen as Thomas Pynchon recited Ulysses from memory over longnecks on J. D. Salinger’s tab, you might catch the flavor of Eric Kraft’s work. Peter’s own voice is deadpan and faux-naive, and yet it’s woven with strands teased from disparate and richly plaited sheets of modern culture. With Kraft, the jaunty, decadent fables of Alfred Jarry turn into practical engineering advice, while the nerdy ambitions of American do-it-yourself magazines begin to seem like a species of avant-garde art out of some Dadaism for Dummies. His chief tools, however, are borrowed not only from the pages of Popular Mechanics but from Proust and Balzac; Baudelaire and Faustroll take turns with advertisements for Hohner Harmonicas and the Elementary Differential Equations.

Peter Leroy’s lost time is sought out amid a Kraft-crafted canon of short books like The Fox and the Clam and Herb ‘n’ Lorna — books that plumb the lives of Leroy’s friends, pets, and collateral relations. Kraft himself calls his protagonist’s stories “an alternative version of his life story” — a fictional character’s autobiographical fantasies, a funhouse of broken mirrors. Conceived as a trilogy, Flying is the Scriptural underpinning to this vast tapestries of acts, deeds, and things, a canonical, post-hoc justification to frame and enclose a vast and fragmentary corpus. Do they draw those disparate books together into a whole? No — but then, neither is Scripture self-consistent. Leave consistency to the hobgoblins. Contradiction is dialogic, and Eric Kraft’s books make a crowded shelf of rich and entertaining crosstalk.

As we follow the older-but-no-wiser Peter’s quest to undo his legacy, we learn of the many dangers and reversals his young self encountered on the way west. Some are hallucinatory, others are terribly real; but all are unequivocally terrestrial encounters. Spirit may be a marvel of teenage engineering and a wise and watchful muse in her own right, but a flier she is not; astride her, Peter taxis through the long days of his journey, conjuring hilltop castles and lascivious waitresses out of the beating sunlight. His one fragmentary moment of true aviation takes place as he and Spirit enter New Mexico, the Land of Enchantment. Cresting a rise, the rushing air imparts lift toSpirit‘s wings. Peter descends the hill “in a series of graceful flutters” to be greeted by a band of believers in a rose-strewn tent, who take him to be a UFO-mounted alien arrived to administer their salvation. As Peter fibs his way into the cult’s good graces, we come to understand that his stories aren’t remotely “truthy”; they’re mythopoetic, always emerging out of some extraordinary occurrence to answer the needs of those who receive them.

Though his picaresque peregrinations offer many a scrape, Peter emerges strangely unscathed, unprepared for a final reckoning with truth before the assembled Babbington masses. He richly deserves the reversals which, up till now, he fantastically avoided. Even Albertine, despite her wisdom and more than occasional chagrin, seems strangely accepting and unruffled in the end by the unraveling of Peter’s clews. And yet his preternatural good fortune is tempered somewhat by final knowledge that we are all Icarus, dreaming of flight while stuck on deck fiddling with the rigging. So Peter doesn’t tell the UFO watchers that he was felled when sunspots affected his “magnetomic drive” merely to deceive — he’s answering their prayers, confirming and enlarging their own mythology. And ultimately, no one needs Peter’s tall tales more than the residents of Babbington. Hubris may offend the gods, but we need it — and the accidental mythology it spawns — if not in ourselves, then in our neighbors, sons, and daughters.

Previous Previous Post: My Happiness Bears No Relation to Happiness: A Poet's Life in the Palestinian Century
Next Post: The Philosopher and the Wolf Next