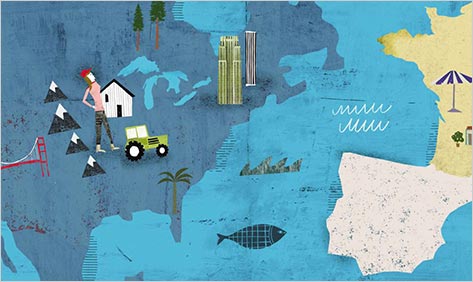 Over the years, as I read Diane Johnson’s witty, ironical comedies of manners about Californians in Paris, it never occurred to me that she and I might have anything in common in our origins and influences. I now discover from her curious little memoir, Flyover Lives, that like me, Johnson was born and grew up in a midwestern town on the Mississippi River and, what’s more, got her first taste of what I call life from a Carnegie Library. By life I mean that painted by Alexandre Dumas, Raphael Sabatini, Nordhoff and Hall, and Captain Maryatt. Here, I see, was another ambitious girl who had no time for Louisa May Alcott, having set her sights on a career of swashbuckling adventure on the high seas. After that, however, our early paths have diverged.

Flyover Lives starts and finishes in fine style with the beginning and end of a wicked vignette set in Provence, where Johnson and her husband found themselves members of an exceedingly rivalrous house party whose members knew their own ancestors like their own bank accounts. Johnson says the episode alerted her to how little she knew of her family, and it also reminds us how far this sophisticated writer has come from the “sweetness, stolidity, and commonsense” of her origins.

Diane Johnson was born in Moline, Illinois, home of John Deere’s steel plow factory and its later incarnations and expansions. (It is also the gravesite of Frank Dickens, one of the great novelist’s unlucky sons.)  Her parents were midwesterners with French and English forebears who arrived in America in the eighteenth century and whose descendants eventually moved west. “We were,” she writes, “default Americans, plump, mild and Protestant.”

Two of Johnson’s female ancestors left memoirs, and it is from these and from a scattering of letters, deeds, and photographs that she attempts to recover her forebears from the shadows of the past, eking out the scant evidence of personality with general historical detail. The longest of the memoirs is that of one Catharine Ann Martin, née Perkins, written around the time of the nation’s centennial. She was born in 1800, in a crude cabin in Vermont, and the story she tells of her life is filled with the sort of details that make one glad one wasn’t born yet. Her father died in agony from “canser,” the remedy of bathing him “in Pork brine with a flannel cloth three quarters of an hour three nights going” having failed to cure him. Catharine taught school and appears to have been filled with the spirit of uplift in her late teens, working up improving little essays, two instances of which are here: “Refinement” and “Novel Reading.” (“What is more detrimental to the happiness of young people than novel reading? It is like a worm at the root of a tender plant, it raises and sinks the mind to extremes, which is unpleasant to the possessor and troublesome to others whose nerves are not so peculiarly fine.”) Catharine migrated to the Midwest in 1927, after she married, though achieving that state was more arduous than usual, as her husband-to-be had a habit of disappearing, leaving Catharine wondering if she was engaged at all.

Aside from Catharine, it is a little hard to get a real sense of what these eighteenth- and nineteenth-century people were really like; there simply isn’t that much personal material from which to draw. The result is a series of glimpses of past predicaments, of living conditions, disease, early death, religious anxiety, and the extraordinary amount of time women spent simply waiting: waiting to get married, waiting for someone to bring the doctor, waiting for things to improve.

As Johnson tries to piece together the fabric of these distant lives —  prerequisites, after all, of her own — she feels uneasy about how little she knows about them: “The questions they raise for us are abiding.” She also feels guilty about how many gaps there are in her understanding and appreciation of her older relatives, the adults of her childhood. This surely is how each generation feels about the previous one, and she expresses it well. Writing of her favorite uncle, a man who had been exceptionally kind to her, she says, “In some way I felt I didn’t take good enough care of him, of any of them, and now they are all dead. Then, I had excuses — I was not old enough, or I was too busy with my little children — but sins of omission are always hardest to bear; we can have more rationalizations about the sins we commit on purpose.”

The last section of the book, “Modern Days,” begins with a reminiscence of a youth spent in a vanished world of quilting, pickling, Sunday visiting, and summers in an amenity-free cabin, a smaller world in scope and larger in family. “I was a child rich in uncles,” she tells us and wonders, “Do people have uncles anymore? Were uncles, nowadays represented as pedophiles and sadists, just another regretted part of the world of genial relatives and unquestioned commitments, a boon not to be recovered?”

Johnson’s father, a high school principal — and she, herself — hoped she would become an airline stewardess after college, but alas (as it seemed), she never achieved the five-foot-four-inch required height. Her first exposure to the literary world came with spending a month in New York as a “guest editor” at Mademoiselle with a number of other young women, among them Sylvia Plath (who subsequently put the episode into The Bell Jar). The experience was intimidating for Johnson, a “provincial nineteen-year-old who found it scary in New York, especially the gravelly voiced women editors, who smoked and looked at the world through narrowed eyes, so unlike the moms of Moline, though they too smoked like fiends.”

Instead of embracing the literary life, Johnson, not yet twenty, got married, moved to California, worked at a despised library job supporting her husband through medical school, and gave birth to four children in six years — all the while trying to write. Then followed divorce, removal to London with the children (and intimations of a married lover left behind), return to California, and on to writing screenplays (including for The Shining), essays, and novels. She treats us to some anecdotes about directors she’s known: Mike Nichols, Francis Ford Coppola, and Stanley Kubrick among them. And somewhere along the line she acquired another husband. Though this is a somewhat distant memoir, thanks to the spottiness of records left from the past and Johnson’s own reticence about really personal matters, it is an engaging one and filled with feeling for an America that is gone forever.