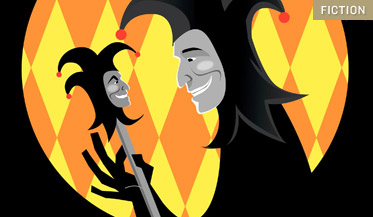 Writers as eclectic as Angela Carter, Jane Smiley, and Edward Bond have contended with King Lear‘s fretful elements, retelling Shakespeare’s tragedy with twin Cordelias, a straightforward Goneril lacking guts and gumption, and an onstage autopsy. But the satirical novelist Christopher Moore has zeroed in on the Fool’s perspective, adding references from Monty Python, Airplane, and The Office into his errant and irreverent quarto.

This referential riffing is not as sacrilegious as it may seem. Let’s not forget that Shakespeare himself lifted plot elements and language from Spenser’s Faerie Queene, John Higgins, Anglican bishop Samuel Harsnett, and Michel de Montaigne — all authors who emerged less than two decades before Lear. So a nod to a 30-year-old cinematic classic (“And don’t call me cousin”) is reasonable under the circumstances.

And Moore certainly has the wry and wild theatricality to take the stage. Here is a writer who fused vampires, turkey bowling, and illegal immigrants into an oddly endearing novel, Bloodsucking Fiends. His religious send-up, Lamb, featured a forgotten apostle who had the hots for Mary, along with a tipsy Jesus who explained why bunnies were associated with Easter. When Moore has drifted down these zany and often iconoclastic byways, his boat floats like a smooth schooner, with the promise of a USS Vonnegut or an HMS Pratchett eventually emerging from the estuary.

But Fool is a makeshift kayak built from stray driftwood and second-rate lumber. The chief problem with Moore’s 11th novel is that he severely underestimates his comic instincts. While the novel contains plenty of bawdy barbs and lowbrow riffs, it reads like the work of a man intimidated by the grand possibilities whispering to him from the waters.

There are clear signs throughout the book that Moore was exasperated by the source material, and these frustrations are confirmed in an afterword in which Moore confesses that, after a considerable intake of film and theatrical performances, “a person can only take so much whining before he wants to sign up for the Committee to Make Elder Abuse an Olympic Sport.”

Aside from the many Riverside Shakespeare–like footnotes serving up mock explanations for such apparently abstruse terms as “décolletage” (defined here as “the road to Hooterville”) and “balls up,” Moore spends much of his novel kvetching about Lear‘s tone and internal logic. Moore expands this conceit by having the Fool — here, named Pocket — devising many of the manipulative ploys carried out by other characters. Of Edmund the Bastard’s epistolary scheming, the Earl of Kent asks the perfectly reasonable question, “Why didn’t he simply slay his brother?” Of Lear’s constant cries to the gods, Pocket observes, “When pressed for a curse or a blessing he will sometimes invoke gods from a half-dozen pantheons, just to be sure to catch the ear of whichever might be on watch that day.” And Kent’s stint in the stocks gives Moore the liberty to roll out an array of sodomy jokes. These saucy cracks aren’t entirely out of line, given that Shakespeare had Kent telling Gloucester, “I cannot conceive you,” a line that has been interpreted any number of ways by licentious scholars. Given such contextual attention, what’s surprising is that Moore misses a wonderful comic opportunity to explain why the Fool and Cordelia never appeared on stage together.

While Moore’s cranky quibbles are often amusing, he undercuts these gibes with a patchwork storyline composed of incongruous parts. He equips Pocket with daggers on his back, throws in a ghost who pops into the story every so often to prophesize doom, and even enlists the three witches from Macbeth to intervene. Such hodgepodge assemblies have worked for Moore before, but the approach is disastrous here, because the real Lear‘s taut togetherness remains a constant shadow. A tedious aside into Pocket’s early days in a nunnery might be good for a few forgettable locker room laughs, but it can’t possibly compare to the original’s memorable intrigue.

When a novel becomes this problematic, it is probably not a good idea for the author to include a seven-page note revealing how his editor bullied him into writing about Lear’s Fool while doped up on sleep medication. It is also not a good idea for the author to boast about how he has paraphrased numerous plays “largely to throw off reviewers, who will be reluctant to cite and criticize passages of my writing.” This reviewer, who has kept up a somewhat embarrassing obsession with Shakespeare over the years and who has remained mostly mum on this because of a few regrettable experiences with needlessly intense SCA members, expresses no reservations whatsoever in noting a few of Moore’s many references: the Duke Orsino’s opening line from Twelfth Night slightly adjusted to “If music you must make, play on,” Hamlet’s “slings and arrows” now outrageously uttered by Gloucester, and Richard III’s “winter of our discontent” transplanted to a backstage intermission.

Much of this is fun. But with Moore mired in nods to the Bard, his pleasantly eccentric voice is mostly lost. Moore does manage to sneak in “a pork shoulder the size of a toddler.” And a carnal consideration bears “the auditory effect of a bull elk trying to balance a wildcat on a red-hot poker.” When a writer can dash off such lively language, why would he lack the confidence or the ambition to merge his talents with Shakespeare?

Perhaps an answer to this question can be found in a reference to a “rosebud asterisk” matching up to Vonnegut’s infamous anatomical shorthand in Breakfast of Champions. Whether this nod to a more obvious influence than Shakespeare represents a confession or an anxiety is subject to a psychological question beyond my ken, but one thing remains certain: A novelist, however talented, cannot develop his voice when he is constantly comparing himself to the greats who have come before.

There may very well be a grand galleon sailing out of Moore’s slaphappy port in the future, with a raucous crew bellowing salty sea shanties and a confident skipper at the helm. But this won’t happen unless Moore learns to love what he’s skewering and trust what he’s got. To write anything less is to be led off the cliff, stumbling as blindly as Gloucester. It’s the stuff of tragedy.