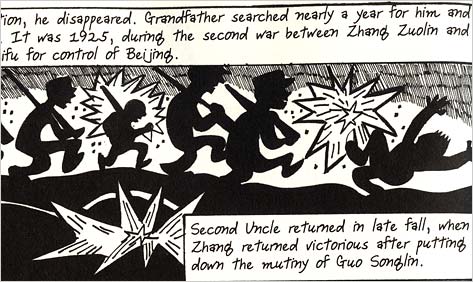 The graphic memoir is a form that seems particularly well suited to conveying what is, to us, a foreign experience. The visual yin marries the verbal yang to yield a full round, each half of which contains a small portion of the other. In their totality, they cannot be unlinked, nor can the book be imagined in any other figuration. Such is the case with Marjane Satrapi’s Persepolis, and the picture books of Allen Say and Shaun Tan (The Arrival without any words but imagined ones, yet no less powerful an immigrant saga for that). Likewise with Forget Sorrow, the first graphic memoir by illustrator Belle Yang, who describes the complex history of her prominent Chinese family through the glass of her father’s reminiscences after his emigration to California.

Her great-grandfather in Manchuria tells her father, “We must understand the past so that we may understand how we became who we are today.” That is the purpose of the “ancestral tale,” and it may also serve to elicit in American readers some amount of regret that many of us are increasingly ignorant of our own generational curriculum vitae. It is a loss we may not even feel until we are made witness to the rich and byzantine genealogical tapestry of someone who feels driven to know whence she came.

For Yang, the desire is pressured by her unhappy situation in America: she is being stalked by a violent ex-boyfriend (here named Rotten Egg) as well as by the disapproval of her often distant father. As we learn when she interviews him about his life as a member of the formerly great House of Yang, with its passage through the world war and Communist terrors of the twentieth century, he has abundant reason for bitterness. But to speak of the unspeakable becomes an act of renewal, through which Belle Yang’s life is given new purpose as graphic memoirist while her father, her Baba, finally lays down the burden of the family’s past, which has bowed his back under its sad weight. 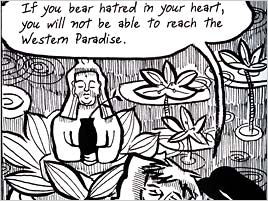 The experience of turning these pages, like troweling deeper and deeper into the earth, is hypnotic, perhaps because the author takes us to a place that is not only far removed from anything with which we may be familiar (replete with exotic customs and festivals, unusual terminology and familial relations, a strange political order, and ancient ways of life) but is refracted yet again through retelling. Slowly we are immersed in the foreign as in a watery pool, to become a fish unaware that a hook has got us by the mouth because it is at the end of such a gossamer line.

Our raptness is also the result of the varied and peculiar characters that appear and disappear, transform and age, through the progression of panels in which Yang expressively — magically, almost — renders entire personalities with extreme artistic economy. There is the suave Third Uncle, who cunningly manipulates his father into giving him control of the family’s distant farmlands, and thus its wealth; there is the odd duck of a Fourth Uncle, who was the only one allowed to smoke and who rigged radios to spy on the doings of his siblings; there is Second Uncle’s cross-eyed wife, who became more and more unhinged until she exploded in a harridan’s forbidden rage at her father-in-law. Even a sad-eyed donkey attains a measure of eloquence as a symbol of the family’s decline.

Yang’s expressive drawing is the same bold and earthy black of R. Crumb, but thicker — in a metaphorical sense, as well as a literal — and done with a rougher, hastier brush, as if something imperative were pushing it from behind. And so it is: through writing the story of her family and its travails, she explains, “I have tried to write sorrow out of Baba’s life.”

The story he tells his daughter — of life compressed on one side by the internecine machinations of brothers trying to take charge of a powerful family’s wealth (in the end lost to all when the tides of governmental change surged dramatically), and on the other by the privations, fears, and dangers of a time when Nationalists and Communists fought each other only to destroy the old ways of a vast country — becomes more and more incredible. On one page alone, successive panels describe harrowing episodes, each of which might have killed a lesser man: “The Gan River in Jiangsu had flooded. I tied myself to bamboo culms so I could rest”; “The Communists pressed south. I crossed the Gan on a log. Many drowned in the attempt”; “I was conscripted by the Nationalists in Canton and shipped to Taiwan, there to defend Chiang Kai-shek’s island refuge . . .”;  ” . . . and became a street person in Taipei, the capital, with no place to sleep”; “Then I went deep into the mountains of the aborigines to teach Chinese to the children and contracted malaria.” The movement alone, from Manchuria to Taiwan to Japan to the U.S., bespeaks a fortitude, and a terrible necessity, that few contemporary readers will ever know.

After Baba entered the U.S., in 1971, the family left in China in effect retreated behind a blank Communist-drawn curtain. In 1979, Yang’s father returned to try to discover what had happened. And, under totalitarian rule, what had happened was shocking. The once rich House of Yang had been reduced to begging — that is, the members of it who had not been carted away to labor camps and buried, in the end, in mass graves.

“Forget sorrow” is both a Buddhist mantra — the thing needed most by a family that came to suffer so much — and the name (Xuan) given to the girl, Belle Yang, born in Taiwan in 1960, who would feel compelled to learn of the family’s trials and triumphs and then commit them so movingly to paper. Through a felicitous act of remembering, forgetting is finally achieved.