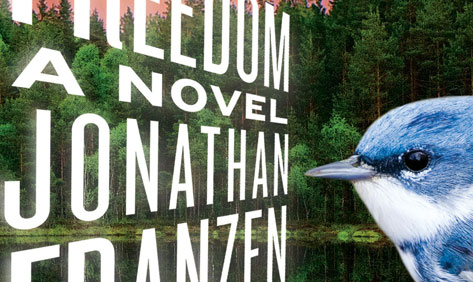 Moby-Dick, the Great White Whale, is supposed to be the curse of American fiction: writers whose ambitions rival Ahab’s set off in quest of the Great American Novel only to produce bloviated pseudo-profundities (e.g. Norman Mailer) or die in the attempt (Ralph Ellison and his very posthumously published Juneteenth). Jonathan Franzen leaves the wake of the vengeful cetacean behind and asks us instead to consider the Cerulean Warbler, a small blue songbird that migrates between North and South America:

It breeds in treetops in mature deciduous forest . . . . And then, as soon as the babies can fly, the family moves down into the understory for safety. But the original forests were all cut down for timber and charcoal, and the second-growth forests don’t have the right kind of understory, and they’re all fragmented with roads and farms and subdivisions and coal-mining sites, which makes the warbler vulnerable to cats and raccoons and crows.

It is, as one character says, a very choosy little bird. Choosiness, in a novel called Freedom, would seem to be significant. But are the ways in which a bird can be said to be choosy relevant for the mammals reading this book? After all, birds can’t choose to alter their migration patterns or to develop an anti-raccoon defense system. People, though, are very good at moving into new territories and getting rid of things that get in their way. Maybe this is just our nature, genetically coded adaptive skills that make us what we are. Or are we free to choose how to be?

Franzen gives us a number of characters through whom we can think about freedom—liberty, license, and individual choice butting up against family circumstances, environment, genetics, and historical and cultural forces. Most of the characters form a tidy nuclear family, the Berglunds. There are Walter and Patty, the parents of the vibrant Joey and the curiously faint Jessica, and themselves the children of Berglunds from Minnesota and Emersons from Westchester. Rippling outwards, there are neighbors, old college friends, Joey’s girlfriend, business associates, and so forth, but the family is the main unit of study. And as we’ve learned since Tolstoy, even happy families are unhappy underneath: the bitter immigrant breeds the slacker breeds the save-the-world-er breeds the in-it-for-me guy breeds the . . .

It would be easy to conclude that Franzen has swathed this family in gloom and doom and the tentacular ties that bind. And indeed at certain stages of narrative, the novel seems to join the everyone’s-a-victim in-crowd: Swift’s infinite regress where every exploiter is also an exploitee.

So nat’ralists observe, a flea

Hath smaller fleas that on him prey

And these have smaller fleas that bite ’em,

And so proceed ad infinitum.

Victims all the way down. Can this circle become broken?

Of course, freedom is, as one self-serving character points out, a pain in the ass, and no one seems happy with how much they have, whether they think that amount is a lot or a little. Walter, the rare man who can be persuaded by argument and assumes others can too, tends to start with the societal: “People came to this country for either money or freedom. If you don’t have money, you cling to your freedoms all the more angrily. Even if smoking kills you, even if you can’t afford to feed your kids, even if your kids are getting shot down by maniacs with assault rifles. You may be poor, but the one thing nobody can take away from you is the freedom to fuck up your life whatever way you want to.” Patty starts with the personal, despite the fact that she writes about herself in the third-person in her therapy journal: “She had all day every day to figure out some decent and satisfying way to live, and yet all she ever seemed to get for all her choices and all her freedom was more miserable. The autobiographer is almost forced to the conclusion that she pitied herself for being so free.” There’s youthful enthusiasm: Walter and Patty’s entrepreneurial son Joey is gung-ho: sex, drugs, and free markets. And there’s experienced resignation: their college friend Richard Katz, an indie rocker avant la lettre living outside bourgeois limits, uses his depression and self-loathing in his work—but he doesn’t see himself as having much choice in the matter:

For Katz’s Jewish paternal forebears, who’d been driven from shtetl to shtetl by implacable anti-Semites, as for the old Angles and Saxons on his mother’s side, who’d labored to grow rye and barley in the poor soils and short summers of northern Europe, feeling bad all the time and expecting the worst had been natural ways of equilibriating themselves with the lousiness of their circumstances. Few things gratified depressives, after all, more than really bad news. This obviously wasn’t an optimal way to live, but it had its evolutionary advantages. Depressives in grim situations handed down their genes, however despairingly, while the self-improvers converted to Christianity or moved away to sunnier locales. Grim situations were Katz’s niche the way murky water was a carp’s.

(Katz is one of the most seductive characters in the book; many characters find him irresistible. I myself am unable to resist pointing out that Franzen has put the Katz among the pigeons.)

In early-middle-aged crisis mode, Patty admires the domestic attractions of War and Peace, but goes the more conventional Anna Karenina adultery route. Walter, more interestingly, develops a master plan: he decides to manipulate the system of nature-raping capitalists on behalf of the voiceless oppressed—which brings us back to that Cerulean Warbler.

Franzen is himself a birdwatcher—he’s spoken about it in an interview he gave to the B&N Review, and the chapter called “My Bird Problem” in his memoir, The Discomfort Zone, seems like a miniature draft of many of the themes of his new book. To be a birdwatcher requires obsession linked to the foreknowledge of disappointment. Distance is inevitable, and perhaps for that reason to be embraced. Love and admiration can be present, but are not necessary. Hundreds of hours looking through binoculars at birds lead Franzen to single out these qualities:

To be hungry all the time, to be made for sex, to not believe in global warming, to be shortsighted, to live without thought of your grandchildren, to spend half your life on personal grooming, to be perpetually on guard, to be compulsive, to be habit-bound, to be avid, to be unimpressed with humanity, to prefer your own kind: these were all ways of being like a bird.

Birders love their lists, and Freedom is filled with lists, which at first seemed to me like shorthand sociology, but now I think resemble a field guide—something like Roger Tory Peterson’s system of a boldly marked image with arrows for the quick identification of species. Franzen gives us the revealingly tacky Christmas presents from non-child-centered grandparents circa 1970: “little pieces of plastic Asian-made crap: tiny travel alarm clocks that didn’t work, coin purses stamped with the name of a New Jersey insurance agency, frightening crude Chinese finger puppets, assorted swizzle sticks.” There’s the early 1980s Good Mother: “an afternoon of public radio, the Silver Palate Cookbook, cloth diapers, drywall compound, and latex paint, and then Goodnight Moon, then zinfandel.” There’s the irritating Perfect Young Man: “Despite working what amounted to a full-time year-round unpaid job, Walter had also managed to star in school plays and musicals, inspire lifelong devotion in numerous childhood friends, learn cooking and basic sewing from his mother, pursue his interest in nature (tropical fish; ant farms; emergency care for orphaned nestlings; flower pressing), and graduate valedictorian.”

These lists can be funny, but they can also close us off from the expenditure of more thought. Is it because lists put everything in a place, no matter how artificial or badly fitting? “Merrie, who was ten years older than Patty and looked every year of it, had formerly been active with the SDS in Madison and was now very active in the craze for Beaujolais nouveau.” It’s flip. Too flip, earning only a cheap laugh? Is it meant to ward off sympathy? Maybe it’s just a lazy shortcut to fleshing out a minor character?

Another distancing technique is foreshadowing, sometimes from the narrator, beginning in the very first chapter, sometimes from Patty in her third-person accounts: “And yet the autobiographer now envies and pities the younger Patty standing there in the Fen City Co-op and innocently believing that she’s reached the bottom: that, one way or another, the crisis would be resolved in the next five days.” At moments like these, Franzen doesn’t seem to leave us even the momentary pleasures of the illusion of freedom. And if that’s so, humor aside, why should we even care about these often tiresome people?

Franzen frames his story through the eyes of neighbors, observers physically close but emotionally at a remove. What’s impressive to my mind about Franzen’s choice to begin and end at this distance is that the interpretive judgment of neighbors turns out to be pretty good and yet always askew. But for the rest of us at our privileged closer vantage points, Franzen has provided a lot of observational data—more than 500 pages worth—so that we can see those little markings that make all the difference. While trying to hold moral binoculars up for so long can make the characters wobble between likeability and ickiness, the development of the muscles of sympathy and judgment it encourages is all to the good—if we can avoid relaxing into the comforts of smugness which Franzen sometimes also puts on display. It’s our choice: readers, after all, have certain freedoms, too.

So although Patty stews in her often self-induced helplessness for quite a while and Walter retreats to lick his wounds, they’re not, after all, that much like birds. Children and grandchildren as well as global warming and a sense of shared history still have a call on them. Ultimately, the Berglunds still aspire—and more importantly choose to act—to arrest victim-ness, the random cruelty of nature and the arbitrariness of fate where neighbors build ugly houses, cats kill birds, and people sometimes die for no good reason at all. I’m not saying we’ve got a happy ending here—Heaven forfend! But Franzen, though not preachy, is big-hearted enough to give us a sense of closure appropriate for his tale.

To erase humans altogether and let nature take its course is not only too pessimistic, but unrealistic. Candide’s conclusion, “Il faut cultiver notre jardin,” is too positive, apparently, perhaps because gardens have come to seem too shaped by human hands. What’s left in this view is a kind of ecological quietism: at least (maybe, alas, at most) we humans can choose to make a fenced-off preserve and then stay out. In Franzen’s world, it seems a hopeful conclusion that this is better than nothing.

Alexandra Mullen left a life as an academic in Victorian literature to return to her roots as a general reader. She now writes for The Hudson Review (where she is also an Advisory Editor), The New Criterion, and The Wall Street Journal.