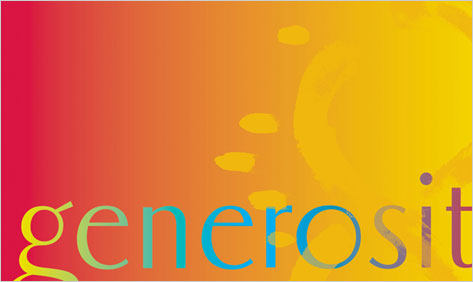 Richard Powers has been taken to task for favoring the cerebral over the emotional in his fiction. He is America’s foremost novelist of ideas (so this story goes), but ideas get in the way of those other, less articulate responses which we collect under the name of “heart” or “soul,” a little sheepishly, as if we don’t want to know precisely what we mean. I don’t believe that Powers is enough of a cynic to write for his critics, but his new novel, Generosity, confronts their charge head-on: the book is about emotion, and not just any emotion, but that most prized of feelings, happiness, which Americans are supposedly free to pursue. What makes us happy? What is the cost of happiness? These are the questions Generosity asks; the answers are at once elating and devastating.

Happiness, in Powers’ novel, takes the form of Thassadit Amzwar, a refugee from the Algerian civil war of 1991-2002, who finds her way to Paris, then Montreal, and ultimately to Chicago, where she turns up in a community-college class in creative nonfiction. Thassadit’s life story is appalling: her father, a physicist, was shot dead for speaking out against the government; her mother died of grief compounded by pancreatic cancer; her siblings scrape by in menial jobs far from home. By rights she ought to be miserable, but she isn’t; Thassadit possesses a kind of contagious euphoria, which infects her creative-writing class and its professor, a self-defeated prodigy named Russell Stone. Baffled, Stone sets out to discover the secret of her happiness. When he speculates that the answer may lie in a rare biological condition called hyperthymia, Stone inadvertently brings Thassadit to the attention of a “genomicist” named Thomas Kurton, who wants to use her as a data point on the way to a future where mankind is freed from depression, and “armed with sustainable satisfaction at last.”

Generosity makes Thassadit the vehicle for some serious questions about ethics, intellectual property, and human nature: should people be allowed to choose their own genes, and those of their children? Who should own the map of our DNA? Does sadness, in any of its forms, play a useful part in human affairs? The asking of these questions takes us on a tour of the scientific establishment in which the breadth of Powers’ interest is very much on display. At one point, not content to give us the transcripts of an imaginary television program on science, which takes up the question of Thassadit’s happiness, he offers us a list of other topics the show has considered, among them “geisha bots,” “thought-reading fMRI,” “runaway nano-replicators,” and so on.

It’s a bravura display of plausibility, which situates the reader at the very thin membrane which separates science fiction from the fiction of the literary kind. There’s a thrill in the way Generosity darts from the confines of Russell Stone’s classroom into the world of international science, television, Algerian politics, as if it were thumbing its nose at the write-what-you-know realism which knows less and less, until finally it’s left with only a single subject, creative-writing professors and their students.

And yet Generosity is more than an intellectual exercise. Thassadit may be a data point, but she’s also a character, a vessel for empathy and story. It’s a measure of Powers’ skill that he convincingly depicts her continual euphoria without making her a saccharine puppet whose head you want to stuff in a sack. Thassadit’s appeal lies in the fact that she’s so interested in what goes on around her: she sees vividly, and, like a good writer, she opens the eyes of those around her. This is dangerous ability, as Stone intuits: when she brings in a video she’s shot on “a Handycam the size of a newborn schnauzer,” he thinks,

She’s seen more of the city in a year and a half than he has in his life. He looks into that face, that invincible grin. She’s fearless, ready to travel into any neighborhood. All he can think is: It’s not safe out there. Happiness is a death sentence.

He is more right than he knows. Some happy things will happen in Generosity: Stone will awake from his moral timidity to begin a romance with a campus therapist; the therapist’s son will emerge from the wilderness of online gaming and discover the face-to-face-world. Everyone else falls in love with Thassadit herself, or rather, with the image of her projected by talk shows, scientific papers, know-nothing blogs. Under the pressure of the public’s love, or adulation, or need, the novel bends in increasingly unhappy directions, until it becomes possible that the curiosity of average Americans will do what the Algerian civil war could not: make the world’s happiest person miserable.

The interdependence of happiness and misery, and the asymmetry with which those emotions are distributed — one person’s happiness too often comes at the price of another’s pain — give Generosity weight.  You want Thassadit’s story to turn out well, but at the same time her ruin is a page-turner: it happens in intercut storylines, TV interviews and blog posts, but it’s still the old thrill of catharsis, of seeing a more or less innocent person destroyed by the gods (or, in this case, by a fictive stand-in for Oprah Winfrey). Then there’s the fun of reading Powers’ neat, deep sentences. Flitting from the question of Thassadit’s happiness to the Chicago weather, for example, Russell Stone thinks, “The temperature has dropped from ninety to sixty in four days. Seasonal affective disorder: the entire spinning planet must be bipolar.” The world, like the story, has its ups and downs; but the pun on bipolar would fall flat without the inclusion of the semantically unnecessary spinning: a reminder that language exists not only to play with meaning, but to create rhythm, to guide the tapping of our unhappy feet.

At the end of Generosity, the writer’s sacrifice (of self and possibly others) for the reader’s pleasure comes to the foreground. It’s a move towards metafiction, and it feels superfluous. Do readers really need to be reminded that the novel was only a novel, the characters only constructs, happiness only a dream? Finishing a good story — and this is a good story — is bitter enough without having the author standing at the exit, waving; but at least his emergence reminds us to be grateful to Powers for his unstinting labor, his brilliant generosity.