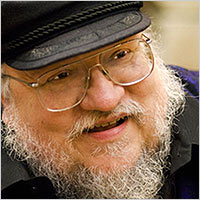 His majestic series A Song of Ice and Fire has garnered George R. R. Martin the title of “the American Tolkien” from Time magazine. Don’t expect elves or orcs, though — the storyline here revolves around an all-too-human power struggle in the fractured realm of Westeros. Martin’s long-awaited fifth installment in the series, A Dance with Dragons, takes readers deeper into the aftermath of a dynastic civil war as a slumbering force awakens. While we await his new book, George R. R. Martin helps us bide the time with some thoughts about three science fiction classics that have inspired his fertile imagination.

Have Space Suit – Will Travel

By Robert A. Heinlein

“Even today, twenty years after his death, Heinlein remains the single most important and influential science fiction writer since H. G. Wells. Have Space Suit – Will Travel was not only my first Heinlein, but my first SF novel of any kind, and it had a profound effect upon my life and career. For many years thereafter Heinlein was my favorite writer, and Have Space Suit – Will Travel my favorite book. I still think it is the best of the series of juveniles Heinlein wrote for Scribners, and it may well be his best novel overall–on even-numbered days, at least. (On odd-numbered days, I give the nod to The Puppet Masters). Kip, Peewee, the Mother Thing, Wormface, a spacesuit so fully realized it is almost a character…to die trying is the proudest human thing…a journey that takes us from the malt shop to the moon to the Lesser Magellanic Cloud…a terrific book on every level.”

The Stars My Destination

“The best book by one of our field’s best writers, enormously influential on every writer who followed. Yes, it’s more-or-less a science-fictional retelling of The Count of Monte Cristo, but Bester’s version is Dumas on speed. Full of invention, adventure, verbal pyrotechnics, and a dazzling cast of colorful larger-than-life characters, this is a novel that leaves a lasting impression on everyone who reads it. The whole cyberpunk movement had its roots in Bester (but don’t blame him for that), and space opera has never been the same. I will never understand why The Stars My Destination has not been made into a feature film. Of all the classics of our genre, this is the one that would work best on the big screen.”

“Zelazny was a true original; a poet, a visionary, a myth-maker. He took science fiction to places it had never been before, with vivid and memorable characters and prose that soared and sang. Of all the writers associated with the ‘New Wave’ that remade the genre in the 60s, Zelazny is the one whose works will last the longest. He did some magnificent writing at shorter lengths, with stories like ‘A Rose for Ecclesiastes;’ ‘The Doors of His Face, the Lamps of His Mouth;’ ‘He Who Shapes;’ ‘The Key to December;’ and so many more. His first Amber series is a classic, as fresh and gripping today as it was when first published. But Lord of Light is his masterpiece. Structurally innovative, mythic, magical, witty, engrossing, this is one of the great SF novels of all time…and it features one of the worst puns in the history of English literature. This book changed the way I looked at science fiction.”