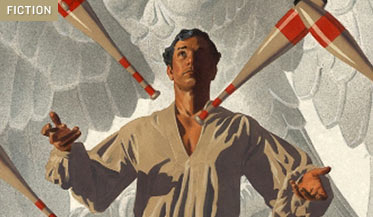 If the image of Albert Speer, a prominent Nazi, juggling rubber balls as a way to relieve stress in the waning days of the Third Reich doesn’t make you sit up and say, “Mein Gott, vas is los?” then Brendan McNally’s debut novel, Germania, might not be for you. On the other hand, if rollicking adventures of Jews masquerading as Nazis, secret wartime shipments of gold, SS officers dreaming of hunting walrus in Greenland, and the tense emotional dynamics of theatrical families intrigue you, then Germania will fit the bill quite nicely. At the heart of the novel are the Flying Magical Loerber Brothers, a popular German juggling act (in more ways than one, as it turns out), who split up just as Hitler is rising to power in the early 1930s. Manni, Franzi, Ziggy, and Sebastian all go their separate ways, some serving in the German military and some going underground with Resistance groups. But as the Allies tighten the noose around Berlin in 1945, Hitler commits suicide, and major players like Speer, Heinrich Himmler, and Admiral Karl Dönitz vie to fill the Nazi power vacuum, the Jewish brothers are reunited through a series of complicated plot twists. McNally mixes fact and fiction in a novel that is one part Michael Chabon, one part Ken Follett, and one part Marx Brothers. During their heyday, McNally writes, the Flying Magical Loerber Brothers’ “time in the air was a flagrant violation of the laws of gravity and physics.” The same could be said about McNally’s novel as it juggles unlikely bedfellows — Jews and Nazis — but pulls it off with the “ease of the daring young man on the flying trapeze.”