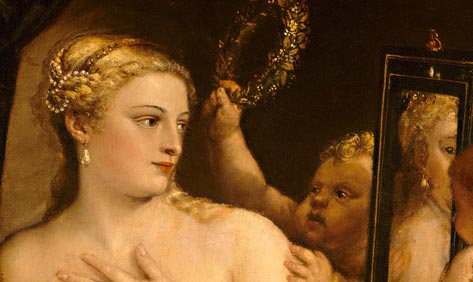 In 1817, a Frenchman abroad in Italy found himself at Florence’s Church of Santa Croce. There he made the acquaintance of a friar and, he later wrote, “begged him to unlock for me the chapel in the north-east corner of the church, where are preserved the frescoes of Volterrano. He introduced me to the place, then left me to my own devices.” What happened next is recorded in the annals of both literature and psychiatric medicine. “Absorbed in the contemplation of sublime beauty, I could perceive its very essence close at hand…. As I emerged from the porch of Santa Croce, I was seized with a fierce palpitation of the heart…and I walked in constant fear of falling to the ground.”

Stendhal syndrome, named for the famous Frenchman who described it in his travelogue Rome, Naples, et Florence, affects relatively few museum patrons (that it’s even a genuine phenomenon is far from settled), but one can easily imagine Camille Paglia among their number. In the twenty-nine brief essays of Glittering Images: A Journey Through Art from Egypt to “Star Wars,” Paglia engages great works of art in a state of controlled, hyper-articulate ecstasy. The reader, following her to vertiginous heights of appreciation, feels at times like asking if she could use a paper bag to breathe into.

Paglia’s fans will recognize Glittering Images as a companion volume to 2005’s Break, Blow, Burn: Camille Paglia Reads 43 of the World’s Best Poems. Both books seek to teach a general audience how to love the arts and to be intellectually and spiritually enlarged by them. “Modern life is a sea of images,” she writes in the introduction to Glittering Images, deploring such distractions as television, video games, and smartphones. “We must relearn how to see. Amid so much jittery visual clutter, it is crucial to find focus, the basis of stability, identity, and life direction.” We must, she says, “present the eye with opportunities for steady perception.”

Paglia is writing for students, who, she feels, have been cheated out of adequate exposure to art and art history. The reasons are legion, and some are woven into America’s historical fabric. America’s cultural patrimony is thinner, of course, than older nations’. Its isolation from avant-garde artistic movements in Europe not only slowed its artistic development but also left it contemptuous or dismissive when finally confronted by the 1913 Armory Show. As a consequence, the country has struggled with an impulse to look at art like the archetypal Hawaiian-shirted tourist: “My friggin’ kid could do that.”

As for the friggin’ kids themselves, Paglia notes that “[f]rom preschool on, art is treated as therapeutic praxis…to unleash kids’ hidden creativity.” What she prescribes instead is, on the one hand, rigorous study of facts — the names of great artists, movements, styles, works — and, on the other hand, an energetic discussion of the most important question: “What lasts, and why?” She has no tolerance for reductive or anemic approaches to art history, taking aim at critical theory, Marxism, and multiculturalism. The reader is warned of the art world’s mindless reliance on shock value and its reflexive hostility to religion. (It wouldn’t be a Paglia book without a confession of atheism followed immediately by a robust defense of the splendors of world religion and its artistic heritage.)

These arguments will be familiar to readers of her previous work. There isn’t an adult reader alive who wishes there were more to read about Andres Serrano’s Piss Christ or the Brooklyn Museum’s “Sensation” exhibition. But it is Paglia’s sincere hope to reach younger readers or readers who are largely ignorant of the state of the art world. The earlier one gains a healthy skepticism of bad art, or an immunity to faux-sophistication and critical gibberish, the better. In any case, Paglia does not stop at deriding vacuous shock art; she also mocks prudish conservatives who let themselves be baited by it and who have been “equally guilty of sins against culture,” from old-world Protestant iconoclasm to contemporary Evangelical squeamishness about the nude.

Will young people actually pick up Glittering Images? Paglia has improved the odds by getting “Egypt” and “Star Wars” on the cover, but it is her prose, jargon-free, muscular, and fearlessly opinionated, that ought to grab readers of any age. Once pulled into the Grand Foyer for her tour through the centuries, the reader is in complete thrall to the masterpieces on view. Paglia opens with an essay about the murals of Nefertari’s tomb in Egypt’s Valley of the Queens, and right out of the gate — make that grave — her interdisciplinary command of history, archaeology, and even cinema is evident. The legacy of the Greeks is represented not only by their most lifelike bronze and stone statuary — The Charioteer of Delphi, Laocoön and His Sons, and the caryatids of the Erechtheion — but also by the more stylized and mysterious Cycladic figurines.

Art history buffs may well sigh that many of Paglia’s selections are predictable, but there is nothing in Glittering Images as iconic or commercially abused as, say, The Scream or The Starry Night. David’s Death of Marat, the pick closest to belonging in that category, gets a treatment pleasingly situated between college textbook and Grand Guignol: “Because of his ‘leprous’ skin condition (probably arthritic psoriasis),” Paglia writes, “Marat worked and wrote while bathing his emaciated body in suflur salts, a vinegar-steeped rag (to sooth the fiery itching) wrapping his head.” Monet’s Irises becomes an occasion to teach the reader about impasto — and thus the importance of seeing a work of art in person and not as a reproduction under Plexiglass in someone’s bathroom.

Glittering Images is a chronological tour, but for the reader with a little background there is no compelling reason to proceed through the rooms in order. One may wish to head straight for the surprises, the unknown quantities — like the African-American painter John Wesley Hardrick, who worked in midwestern isolation and whose Xenia Goodloe is an expressive portrait, glowing with personality, of “a woman who knows the world and feels at home in it.” Paglia, who writes movingly of the Book of Kells, Donatello’s Mary Magdalene, and Picasso’s Les Demoiselles d’Avignon, seems just as comfortable with the challenge of justifying Mondrian, Pollock, and Walter De Maria to Middle America.

Best of all, Paglia goes too far. She concludes Glittering Images by calling George Lucas the greatest artist of our time. She makes this claim on the strength of a scene from Revenge of the Sith, the final film of the Star Wars franchise, which The New Yorker‘s Anthony Lane memorably allowed was preferable to the previous two “in the same way that dying from natural causes is preferable to crucifixion.” All the same, anyone who thinks she’s pulling a stunt, making a desperate bid for unconventionality, hasn’t read her carefully enough. Paglia’s willingness to go wildly wrong is proof of an honesty and enthusiasm that, when wedded to a profound intellect, one can’t put a price on.