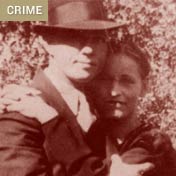 Mention “Bonnie and Clyde,” and the first image that springs to mind for most people is the “bullet-ballet” death climax of Arthur Penn?s 1967 film. Fair or not, Warren Beatty and Faye Dunaway have been burned into our cultural consciousness when discussing the infamous bank-robbing duo who met their demise in an ambush near Gibsland, Louisiana, in 1934. The real story of Clyde Barrow and Bonnie Parker, however, bears little resemblance to the Hollywood fabrication, argues Jeff Guinn in Go Down Together, his riveting dissection of the life and times of the romantic robbers. Though Bonnie and Clyde were never criminal masterminds on the order of John Dillinger or Pretty Boy Floyd — Guinn writes that “their two-year crime spree was as much a reign of error as terror” — to the law-abiding public downtrodden by the Depression, they were “the epitome of scandalous glamour.” The short, scrawny Clyde loved fast cars and was devoted to his family; Bonnie, “a borderline alcoholic,” wrote poetry and yearned for an exciting catalyst to pull her out of the slums of West Dallas, Texas. Guinn?s inside look at their “brief era of roaming banditry” is at times sympathetic to the doomed pair — neither of whom would live to see their 25 birthday. “Their fatalism was tempered by their youth,” he writes. Subtitled The True, Untold Story of Bonnie and Clyde, the book relies heavily on a pair of unpublished memoirs from Clyde?s mother and sister. Impeccably researched and drawing on interviews with surviving family members and those who came in contact with Bonnie and Clyde, Go Down Together chips through the layers of legend and outright fabrications (both from the prevaricating Clyde and self-aggrandizing lawmen) to get as close to the truth as anyone can. The result is a book pulsing with a narrative rhythm that has all the shock and excitement of a tommy gun?s rat-a-tat-tat.