The Nobel laureate and towering figure of American letters Toni Morrison died Monday at the age of 88.  She leaves behind a unique and indispensable catalog of works of fiction and nonfiction, explorations of the experiences — often the traumas —  of African Americans across multiple eras,  captured via narratives of breathtaking complexity and great beauty. Her most famous works were her novels including The Bluest Eye (1970), Song of Solomon (1977), and her Pulitzer Prize-winning Beloved (1987); but also featuring works of nonfiction, including many speeches and essays, notably collected earlier this year in The Source of Self-Regard.  In remembrance of her life and work, we are re-sharing Donna Rifkind’s April 2015 essay on Morrison’s final novel,  God Help the Child.– Editors

There’s an arresting moment in Toni Morrison’s new novel, God Help the Child, in which she describes what happens in a large family after the abduction and sexually motivated murder of its eldest child. At the time of his death, the boy was ten years old and a golden child; the loss is unspeakable. Even so, in the weeks after the funeral the household begins a halfhearted return to its former routines. “In time,” Morrison writes, “the whole family perked up like Sesame Street puppets, knowing that cheer, if worked at hard enough, could sugar the living and quiet the dead.”

In the wake of that potent sentence, Morrison goes on to tell about one of the remaining six children, the son closest in age to the dead boy, whose resentment of the family’s yearning for normalcy isolates him from the rest of the group. A visiting aunt is the only person who understands his fierce need to continue grieving for his brother: “She alone sensed her nephew’s anger-mixed sorrow and pulled him aside. ‘Don’t let him go,’ she said. ‘Not until he’s ready. Meanwhile, hang on to him tooth and claw.’ ”

The magnetism of this scene comes not only from the vigor of its language. It’s also a reminder that sorrow infused with anger is the emotional foundation from which all eleven of Morrison’s novels have sprung, beginning in 1970 with The Bluest Eye. God Help the Child, which shares some of that first novel’s themes, can be read, in fact, as an imaginative summary of Morrison’s entire literary enterprise. It bears a lifetime’s worth of anger and sorrow, distilled to their essences and fiercely hung onto, tooth and claw. Never averse to risk, Morrison strips this narrative of much of the temporal detail that tethered readers to the specific times and places of such books as Sula, Beloved, and Home and rushes unencumbered into the storm. 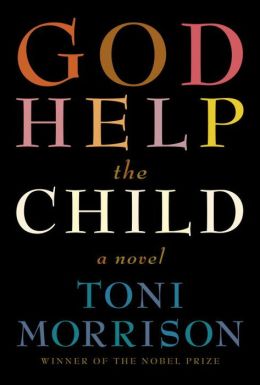 Exploring different kinds of damage that children can suffer, and the ways in which damage keeps resurfacing throughout those children’s lives, the novel begins with the confessions of a light-skinned mother who is repulsed by her daughter’s blue-black color. “I used to pray she would slap my face or spank me just to feel her touch,” the girl, whose name is Lula Ann Bridewell, later reveals. Her mother insists that her brusque treatment of the girl has offered necessary lessons for survival in a hostile world. But Lula Ann’s extreme behavior shows the extent of the injury her mother’s lovelessness has inflicted. When she was eight years old, Lula Ann went so far as to accuse a female teacher of sexual abuse and was gratified upon leaving the courtroom when her mother, proud of her for the first time, at last consented to hold her hand. Now, at twenty-three, Lula Ann has changed her name simply to Bride and has morphed into an imposingly beautiful fashionista and businesswoman, preparing to launch her own cosmetics line. Yet she falls to pieces when her boyfriend, Booker, suddenly dumps her, re-exposing the vulnerable, unloved child-self that still cowers beneath her grown-up façade.

Bride sets off to find and confront Booker, who is grappling with unfinished childhood trauma of his own, for he is the brother of the murdered boy who could not relinquish his grief when his family chose to move on. Over the years, Booker has made outward strides toward mature adulthood, studying economics for a postgraduate degree and playing the trumpet for fun in small jazz clubs. But he remains emotionally stunted, forever traumatized by his brother’s death, which has become, in the words of the sympathetic aunt who once counseled him not to let it go, “his own life. I think it’s his only life.”

And so it comes to pass that the romance of Bride and Booker seems doomed, their “fairy-tale castle collapsed into the mud and sand on which its vanity was built.” Morrison weaves all sorts of folkloric imagery throughout Bride’s journey as she ventures from the city into the woods to search for Booker in a northern California logging town. There is a kindly forest-dwelling couple and their changeling child; there are momentous rainstorms and a fateful yellow rose; there is even a dose of magic realism when Bride notices — or does she imagine it? — that her body appears to be reverting to its original childhood form.

Morrison deploys these tropes of enchantment not to soothe or entertain, of course, but to prove how durable are the wounds of the past, how locked we are into its familiar tunes and lyrics. Along with Booker and Bride, there are four other voices who narrate the novel’s action: all are victims in some way, and all have a story to tell about the everlasting damage inflicted by the powerful upon the unprotected among us. From these intimate stories we’re encouraged to recollect Morrison’s more global and historical variations on the theme: the mutilating effects of slavery in Beloved, for example, or the internalized racism in The Bluest Eye.

What’s different here, though, is the concision of the text. Morrison deliberately offers only the lovely bones of the story, where some might wish for a fairy-tale landscape more extravagantly decorated with raiment, jewels, and woodland creatures. This is not to suggest that the book is monotonous: there is tonal variety here, of a carefully curated sort, and some leavening humor: at one point Bride complains about the tedium of television — “mostly blood, lipstick, and the haunches of anchorgirls.” But what we might wish for, as every reluctant grownup must admit, is a yawning chasm away from what we need. God Help the Child is clearly and forcefully the effort of a writer impatient to cast off every superfluity to expose the rage and sadness at its heart.

Previous Previous Post: The B&N Podcast: Kiese Laymon and Shane Bauer on Writing with a Mission
Next Post: King of the Dark Episode 8: The Stand Next