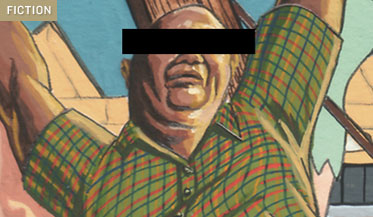 Gary Gray, ?black outside and damaged inside,? prays to two Jesus statues to make him straight, but neither complies. Perhaps they?re simply annoyed at the way Gray gets turned on by a stained-glass depiction of David and Goliath in church. Even after he accidentally impregnates his girlfriend (?All women have mustaches, and fortunately for me, Annie didn?t bleach hers?), Gray?s entreaties go unanswered. In the early 1990s, unable to reconcile his sexuality with his fundamentalist faith, Gray becomes an expert in deception and sets increasingly lenient rules for his ?guy stuff.? Then a disaster coupled with a religious hallucination gives him the opportunity to escape his wife and infant daughter for a year of what he calls ?free checking?: the ability to indulge his desires in order to purge them for good. Hannaham feels genuine sorrow for the struggles of his pitiable protagonist. He transforms this first-person account of burgeoning self-awareness into a parable about the dangers of such strict adherence to Someone Else?s rules. As Gray goes to greater lengths to repress his urges and suppress himself, the novel, not surprisingly, takes a dark turn. It?s hard to be funny about a rehab facility in the Deep South that treats homosexuality as an addiction. Lighthearted beach reading, this isn?t, nor is it as twee as other McSweeney?s fare. Nevertheless, at its core, God Says No has a passionate sincerity that will certainly brighten some readers? days.