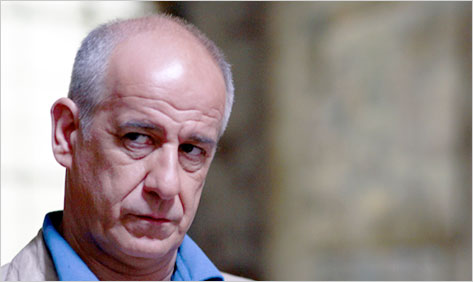 Assuming that a hungry recruit can stomach the high mortality rate, there’s a fair shake of upward mobility should he hand himself over to the Camorra — a real-life criminal syndicate exposed in 2006 by hardcore journalist Roberto Saviano (now under 24 hour security for his commendable services) and adapted into a brittle and commanding film directed by Matteo Garrone.  Sure, you might get iced just after you’ve proven your loyalty by taking a slug in a bulletproof vest.  And there’s little here to suggest an onset of casual Fridays, unless you’re a starry-eyed teenager with Tony Montana aspirations who enjoys blowing up boats wearing nothing more than Fruit of the Loom.  In this onyx Neapolitan wasteland of bleak concrete, crumbling mortar, and leaky landscapes, vocational options are scarce.  But the Camorra have more duties than the UPS.  These Italian Dillingers are quite diligent in burying hazardous waste, watching over illicit sweatshops, and blowing away friendly neighbors when there’s a bad family connection.

Such moments are often bleaker than a Mike Leigh nightmare, but Gomorra‘s raw and unadulterated atmosphere serves as a tonic to Paul Muni wish fulfillment, presenting dead-eyed mercenaries who value the swift accumulation of Euros above all human virtue.  It’s worth pointing out that Garrone is a particularly intense man in the accompanying behind-the-scenes documentary.  “All the takes shouldn’t be alike,” barks Garrone to his largely nonprofessional actors.  “Each take has its own story.”  But the searing totality of Garrone’s vision raises Italian neorealism from its postwar dust, beckoning a new gang of cinematic innovators.