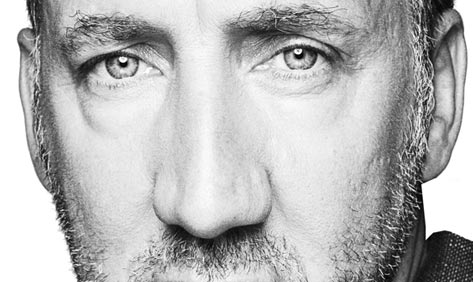 What does rock ‘n’ roll do to a person, long-term? Decibels, overload, and the ravening Id; chemical attrition, abuse of the higher faculties; near-limitless scope for bad behavior… After decades of these, what effects? Well, the specimens are walking, or shambling, among us — and more than that, they are writing up their own case histories. On the microscope slide of memoir they are offering us slivers of old rocker brain. Keith Richards did it in 2010 – in his book Life — with the help of co-author James Fox. Now Neil Young and Pete Townshend have done it, each in his own way, no co-authors involved. “Writing is very convenient, has a low expense, and is a great way to pass the time,” declares Young in Waging Heavy Peace. “I highly recommend it to any old rocker who is out of cash and doesn’t know what to do next. You could hire someone to write it for you if you can’t write it yourself…. Just don’t hire some sweaty hack who asks you questions for years and twists them into his own vision of what is right or wrong.” Townshend, most Townshend-ianly, concludes Who I Am with a letter to his eight year-old self: “You have a brilliant mind. Unfortunately you are not going to exercise it quite as much as you should.”

These are two very different books by two very different men. Who I Am is literate, self-aware, painstakingly chronological, and written in a spirit of lacerating candor. “I was still experiencing manic-depressive anxiety attacks, hearing voices and music, seeing visions. The only medication that helped was alcohol.” Waging Heavy Peace is candid, too, but hazier and more graciously self-forgiving. The book ambles back and forth on a woozy narrative spiral — now he’s talking about his latest car, now his broken toe, now his first band — and reads for the most part like it came curling off the top of Young’s magnificent head. “So we are getting into this now. There may have to be more than one book. I read up on this sort of thing, and the worst thing you can have is a book that is too long.” A couple of points of commonality, though, between Neil Young and Pete Townshend: they are both geniuses, and they have both largely expressed themselves with electricity, using amplified guitars.

Townshend’s classic sound is a near-celestial ringing and whooshing, his solos a matter not so much of individual notes as of the huge choral combinations at that moment forcing their way through his built-to-order high-tensile noise-conducting neurotic Englishman’s frame and hands. As a boy, we learn from Who I Am, he was subject to mysterious sonic overwhelmings, often triggered by rivers or the sea: “I began to hear the most extraordinary music, sparked by the whine of the outboard motor and the burbling sound of water against the hull. I heard violins, cellos, horns, harps and voices, which increased in number until I could hear countless threads of an angelic choir.” When, as a man, he channeled this “alpha-state music” through his guitar, it would emerge stamped unmistakably with Townshend-ness — what Gerard Manley Hopkins, writing of the composer Henry Purcell (also a favorite of the young Townshend), called “the forgèd feature”: “…it is the rehearsal / Of own, of abrupt self there so thrusts on, so throngs the ear.”

Neil Young’s sound — when he’s really going — is heavier, weirder and more searing, with the glimmering immaterial weight of an epileptic aura. (Young himself has suffered from seizures, rushes, strange buzzings and gusts of “cosmic wind”.) In Waging Heavy Peace he recounts the moment when he first delivered himself to it, surrendered to it, dangerously — the full current of his musical being. The occasion is a show by his pre-Buffalo Springfield band the Squires, at the Flamingo Club in Fort William, Ontario, where having played a solo “like I was out of my mind” Young is approached after the set by a well-respected local guitarist, a real shredder and proponent of “the Toronto sound.” As Young records it, the man is agog. “What the fuck was that?! What the hell were you doing? I have never heard anything like that in my life! It was fucking great, man! Shit!” (That last exclamation capturing beautifully the enraptured, covetous sense of affront that is the truest tribute one artist can pay to another.)

Both Neil Young and Pete Townshend are also, in the best and most constructive sense of the term, cranks. Parts of Waging Heavy Peace double as a product pitch for Lincvolt, Young’s vision of a fuel-efficient, sort-of-green classic car (“Lincvolt will be powerful, clean and sexy. This has to happen. It is going to.”) and PureTone, his attempt to rescue recorded music, and the ears of its listeners, from the plague of the MP3. Throughout the book he is building, designing, inventing, fiddling with wires, giving up, starting again; he is a lifelong model train buff, with a “small share” in the collectibles company Lionel; reworking the interior of Broken Arrow Ranch (where he wrote “Old Man”) he makes connoisseurial trips to the lumberyard, going through “stacks and stacks of twelve-inch-wide planks of rough-sawn A-grade redwood, choosing the ones with the most beautiful sap and grain. Maybe I took one out of every twelve.”

He is a glorious gearhead: his relationship with his cars, with his guitars, is true intimacy. Ragged Glory, he tells us (rumbling with ecstasy) was mainly written in his “car barn,” surrounded by “all of my best shit”: “My Fender Deluxe with a Fender Reverb, my whizzer attached to it, my Magnatone feeding from that, and my Baldwin Exterminator feeding off of it, too.” He has also adored dogs and people — especially people who, like good cars, do their jobs properly and with a bit of style: his formidable manager/confrere David “Be great or be gone” Briggs is eulogized, in bursts, throughout Waging Heavy Peace, as are the likes of sideman Ben Keith (“a wonderful man, gentle as the rain”) whose steel guitar playing on “Old Man” and “Heart of Gold” is the very definition of the word plangent.

The crankiness of Pete Townshend is more, shall we say, abstract. True, his breakthrough work with synthesizers around the time of Who’s Next was quite Young-esque in its balance of inspiration and hands-on monomania. (Why is he not acknowledged as a pioneer of electronic music? Oh, that’s right: because his greatest innovations are buried under the powerchords of “Baba O’Riley.”) The real action, however, was upstairs, in the throbbing Townshend brain.

There vague intuitions and intimations — about the power of Rock, about the coming of virtual reality, about the one true note from which all music springs, about a sad boy in a bubble — congealed into concepts, “high-flown congregational notions”, few of which he was able to get across. “My excitement was greatest,” he writes, “when I was exploring the terrain between the spiritual magic of music and the march of physics. Unfortunately I wasn’t having much success communicating in the language I was using — one part science fiction, one part mystical waffle, one part visionary glimpses of the role computers could play in the future of electronic music.” As he himself had prophesied in an early Who hit, he couldn’t explain. His ego would rise in indignation. “It’s like trying to explain atomic energy to a group of cavemen,” he complained to his wife Karen in 1970, having failed to put his bandmates in the picture with regard to his Lifehouse project.

But the point about Lifehouse was that nobody understood it — not the Who, not their management, certainly not the kids who gathered at London’s Young Vic theatre, in early 1971, in nebulous expectation of a futuristic Who/audience mash-up. (“We did manage to perform some songs to a pre-recorded backing track,” relates Townshend in Who I Am, “but no new music was produced; the assembled audience wasn’t given access to electronic instruments, or even tambourines to bang.”)

We should be grateful, I suppose, that Townshend the electro-druid has opted to tell his story straight, in sequential black-and-white, rather than in whirring cyber-splinters on some unusable new social media platform. But telling it straight is important to him now, particularly with respect to the child pornography scandal that enveloped him in 2003. (Who I Am will reassure you that he meant no harm.) As for the reasons or purposes behind Waging Heavy Peace, they seem to be twofold: first, to check that Neil Young’s brain is still working, and second, because no songs are coming to him at the moment. On the former point he is disarmingly straightforward: “I am always getting scared that I will be in the middle of some long-winded story and forget what I’m talking about and my secret that I am slowly losing my mind will be out. It is a real fear. Everyone will know! But that is not new. That is not a recent development. I have always been like that. That is what makes detecting the onset of early stages of dementia in me so difficult.”

On the latter he is shrewd and artistic: “Songs are like rabbits and they like to come out of their holes when you’re not looking…. So I feel like am standing over a song hole. That will never result in success.” Childlike, senescent, wise, and wonderfully foolish, Young in Waging Heavy Peace hands down his lessons — the most fundamental of them, perhaps, being one to which the Townshend of Who I Am would readily assent. And it goes like this: “Don’t be greedy. Be ready.”