Green: The History of a Color

Color talks: Baneful, snobbish, scandal-mongering, modest, salubrious, fellow feeling — a mere soupçon of color’s qualities. Ambiguity: color would not be fixed, literally or figuratively, for the longest time, nor will it ever be, and in Green: The History of a Color, Michel Pastoureau shows all of the possibilities in just one band of the spectrum. Mordants — fixers — are tricky things, as shape-shifting as the symbolic robes of color. Regarding the systems of signification, colors treat them as musical chairs, changing their referents, being good, being bad, being both at once. Add to that an understanding that the antique or medieval eye did not perceive color as we do, its alleged physiological and psychological resonances profoundly out of synch with ours; it was once thought that our none-too-distant cousins were colorblind. “Our knowledge [of color], our sensibility, our present-day ‘truths’ were not those of yesterday and will not be those of tomorrow.”

Pastoureau is a spirited but learned writer, as thrilled with oddities as he is to connect dots. He is happy in his work, and it is communicably seductive. He is a skeptic in the Mary Beard fashion; suggestions are fine, but claims better have some meaty provenance. “There is still an immense gap between the wealth of documentation, the importance of color in all the social codes, and the too rare studies we have at our disposal.” “Given the current state of our knowledge, we cannot answer that question.” Pastoureau could have put that on a loop. Yet, he is never downbeat, for he is onto the birth of something, a glimpse into how the human mind has worked through the ages.

You may have already met M. Pastoureau, who is the director of studies at the École Pratique des Hautes Études de la Sorbonne. A director of studies but more of a chercheur — it is no stretch to imagine him a medieval librarian, toiling in a monastery tower, going to the source to sound the pealing, historiographical note. He examines green from many angles — rarely as a fragment of light but as a social phenomenon, a culturally sculpted perception: “For the historian the issues of a color are essentially social issues” (society gives color its meaning, codes, values, uses, and stakes; colors speak like Charlie McCarthy — with manipulated tongue [but not always]) — often in combination with or opposed to other colors, while a color’s distillate, its elemental being, remains inconceivable outside its embodiment. Pastoureau has written four dozen or so books, including Black and Blue, with Red and Yellow in the oven, which have and promise to take the same tack as Green the enchanter. 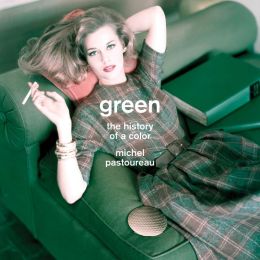 Pastoureau’s approach is elegant and revelatory. It is chronological but with as many divergent branches as Charlemagne’s family tree. First he situates the colors in their immediate time/space universe, accounting for their lexicon, their chemistry and manufacture, dyeing (in use there is meaning), dress systems and codes, color in everyday life, color in social mythology, and the rules and moral standards of the society, authorities, and church. And if Pastoureau has not breathed enough dust in that medieval tower gathering this elusive knowledge, now he must track color’s changes as it pushes forward and recedes, takes advantage of innovations, and enters into mergers with other colors, which is about as simple as following a cougar’s tracks over bedrock after a storm. But when it comes to color — its bobs and weaves; its social, cultural, scientific import; of getting to the bottom of the matter — Pastoureau is tireless in pursuit.

Pastoureau’s book spans the Greeks and pagans through to today, but he sticks mostly to western Europe (with a dash off to the Islamic East for a quick yet fruitful visit; Muhammad liked the color green, and that may — really? — have had astounding consequences for future generations). Pastoureau is most comfortable in western Europe, however, and he has no desire to fob off “simplistic generalizations or a reductive scientism” he has only gleaned from other scholars.

So start with the Greeks, whose era was a polychromatic heyday, not the bleached white of the eastern Mediterranean sun. Roman sports have a rich historiography of color, including team colors at the Circus Maximus and other entertainments, while the green of Roman attire had its barbarian reverse snobbery, welcoming the gaze of the Other with a touch of all-purpose braggadocio; nor were liturgists to be outdone, with their rather strict color significations. The medieval period was lavish with green: youth, love, and disorder (that works); treasonous, quiet, and soothing; temperate and balance and mocking and lunatic. Then green entered a slide, an accident waiting to happen. People got fed up with its inability to be fixed true to a fabric or object. Vegetable, earth, mineral, or artificial: it either faded, cost an arm and a leg, or killed you. It turned color when washed or exposed to light and released a periodic offgassing of arsenic. Green was fickle, unstable, disorderly; that’s why they called him the Green Knight: young, hotheaded, unruly, the green of fate, the ancient uneasiness that from antiquity people saw in green eyes.

Come the Middle Ages and all those guild rules that really cut down on green’s use. We know now that green is a secondary color, but in these days of yore, dyers were yoked by restrictive professional regulations: blue dyers could not also be yellow dyers. There would be no mixing: it conspired against the Creator’s desire for order. Green continued its furtiveness, now connected to qualities of inconstancy, duplicity, and betrayal (youth, again).

The Protestant Reformation brought its killjoy spirit to every manner of color deployment: clothes, architecture, illuminated manuscripts. Iconoclasm spawned chromoclasm; stained-glass windows, such papist polychromy, were pelted with rocks. For painters of the period pooh-poohed green as the stuff of genre painting. (It was always the workingman’s color, even if it was also Muhammad’s and Napoleon’s; Queen Victoria banished it, Hitler might have loved dogs but not green. Neither did Kandinsky.) Scientists began classifying green as a secondary, combinatory color. The mortifications kept piling up until the Romantic era, when nature returned to fashion and landscape painting took off, as did the serenity a touch of green brought to the city. Now, wholesale, green is the earmark of an environmental consciousness — all things healthy — an inversion of the “green man” of a couple centuries earlier, who frolicked in the woods and committed violations of the ladies. Bad green.

But this book is not a topsy-turvy collection of curios. It is tied together, if meandering, like William of Baskerville and his novice in The Name of the Rose, and there is Pastoureau in their wake. “Look,” he cries. “Another room! More books!” The better to broaden the range of his inquiries. He tosses squibs of nourishing amusement to the reader along the way: Remember them. They will likely prove  important as we travel from then to now. Norman pirates wore green tunics. Did actors in old mystery plays faint onstage as a result of verdigris fumes radiating from their green clothing? What were the colors of the deadly sins? Did Nero really watch  gladiatorial fights through a large emerald to cut the sun’s glare — the first sunglasses? No, that one’s completely apocryphal — he wouldn’t have seen much through a fat emerald — although manuscript illuminators would sometimes rest their weary eyes on the soothing green of an emerald. Women took to green in their clothes not because they were drawn to the outré Germanic associations but because their cotton and silk clothing fixed green, unlike the wool and linen men wore. Chivalry and courtliness never lost their respect for green. Heraldry was cool on green, another middle color for them, but never cast it to the wolves. Vermeer, Rembrandt, and many other painters did not mix paints; if they wanted green they mixed the minerals of azurite with tin yellow or lapis lazuli with orpiment or, in plants, woad and weld. Why? There are answers here, as well as good tries, long shots, and the occasional shrug.

Green’s text is choreographed with accompanying artwork to produce  a skillfully designed embarrassment of riches. Clearly, one or two sumptuary laws are being violated. John Calvin is rotating in his grave with enough energy to create prop wash. The paper has heft but not weight. The cover reminds us that we are in a High Age of dust jacket design (the hard cover underneath is no poor relative, either). Text, art, design, materials: a book’s book. Open it on plane or train and catch the envious spark — green, of course — in your neighbor’s eye.

Previous Previous Post: The Meaning of Human Existence
Next Post: A Girl Is a Half-Formed Thing Next