Hack: Stories from a Chicago Cab 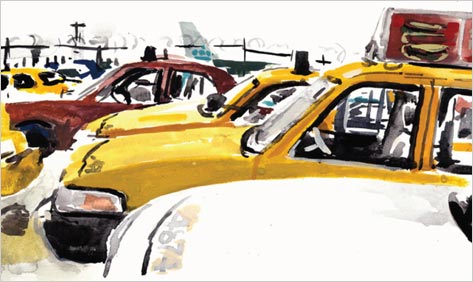 One of the valuable, if unsung, roles of the university press is to publish local history, works about the state or city of their host institution. Often enough, these are staid books — diaries of pioneer women or biographies of little-known governors. But with Dmitry Samarov’s Hack: Stories from a Chicago Cab, the University of Chicago Press has produced a work about the Windy City that could not be grittier or more up-to-the-minute — so much so that it draws on material originally published by Samarov on Twitter and his blog. These vignettes, organized according the schedule of a typical driver’s week — from the Monday doldrums to the bacchanal of Saturday night — constitute a work of ground-level urban sociology, showing parts of Chicago life that few novelists or academics could access.

The freedom of the cab driver, as Samarov describes it, is the freedom of the outcast, a result of invisibility. His peers, the cast of characters who feature in many of these stories, are prostitutes, drug dealers, and the homeless — all people who live in public but are seldom genuinely seen. “With their makeup, voices, and flamboyant clothes, none of the four could definitively be classified as either female or male; they are in that sweet spot calculated to appeal to the widest possible clientele,” Samarov writes about one group of passengers. Picking up these prostitutes at a donut shop parking lot, he observes how their singing and chatting suddenly dies down when they approach their destination, the “abandoned lot” where they’ll get to work. The cab driver, too, conceals his real personality when he’s with a customer: Samarov notes that drivers hate to have passengers sit next to them up front, which suggests too much familiarity.

A surprising number of Samarov’s passengers tell him quite openly that they’re going to buy drugs. “Ashland and Cortez. Take me there fast. There’s cocaine there,” one fare says “even before he sits down.” Others have legal cravings that are just as insistent: “A middle-aged run down woman with teeth missing offers to blow me in exchange for a ride” to a drive-thru fast food restaurant. McDonald’s is a popular late-night destination for drunk revelers, some of whom end up leaving food or vomit in the backseat for the driver to clean up.

Only very rarely in Hack does Samarov end up having some kind of human encounter with his passenger. One such occasion is when a woman pronounces the name of Goethe Street like the writer’s name, “Gertuh,” as well as the Chicago pronunciation, “Gothee”: this is an “instant conversation starter,” and it turns out that she is a teacher for whom “correct pronunciation is a point of pride.”

Of course, it’s not every driver who would identify so readily with the down-and-out. Samarov sees taxi driving as a kind of seated flâneuring, appropriate for a man who is “really” a painter, who only drives to support his art. (He graduated from the Art Institute of Chicago, and Hack is full of his sketches of passengers.) Most drivers are immigrants — many of them, Samarov notes, with professional qualifications that they can’t use in America — and they see driving as a route into the middle class, not a temporary escape from it. Still, after reading Hack, you’ll never again get into a taxi without imagining what the driver might write about you.

We usually think of flavor as an affair of the taste buds. In fact, Gordon Shepherd explains in Neurogastronomy: How the Brain Creates Flavor and Why It Matters (Columbia University Press), taste has much more to do with scent and the way it is processed in the brain. Shepherd, a neuroscientist, examines the molecular mechanics of flavor, and explores the brain’s role in appetite, overeating, and obesity.

History buffs may remember that William Henry Harrison, the shortest-serving president — he died of pneumonia a month after his inauguration — was known as Ol’ Tippecanoe (as in his campaign slogan “Tippecanoe and Tyler Too”). In The Gods of Prophetstown: The Battle of Tippecanoe and the Holy War for the American Frontier (Oxford), Adam Jortner describes how Harrison, as governor of Indiana, launched a bloody crusade against the Indian leader Tenskwatawa, and how the ensuing battle set the stage for the War of 1812.

Don’t buy your ticket for the Jurassic yet, but in Time Travel and Warp Drives: A Scientific Guide to Shortcuts through Time and Space (Chicago), physicists Allen Everett and Thomas Roman explore what cutting-edge science tells us about the theoretical possibility of time travel.