By KATHERINE A. POWERS

Essay by Katherine A. Powers / 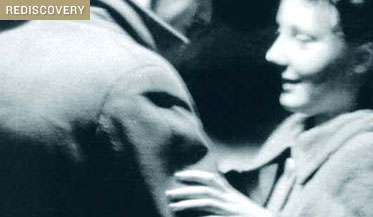 Hans Fallada, as he became known to the world, was born Rudolf Ditzen in Germany on the Baltic seaboard in 1893. A bestselling writer, he was admired and distrusted by the Nazis and later embraced by East German Communists. He was also an alcoholic, drug addict, philanderer, embezzler, and failed suicide. He was a duelist who killed his best friend; a madman who went after his ex-wife with a gun; and an on-and-off inmate of prisons and insane asylums. He died in 1947 at age 53.

The novel that brought him international renown, Little Man, What Now? was published in 1932 and translated into English in 1933. It was a Book-of-the-Month Club selection and, in 1934, became a Hollywood movie. You can see why. The novel is a Depression extravaganza. It follows roughly a year in the lives of a young German couple, Emma and Johannes Pinneberg, known to each other as “Sonny” and “Lammchen,” who marry because the former is pregnant. Their trials present a picture of life in the Weimar Republic, one in which inflation has wiped away old decencies, material and moral, and pervasive unemployment has created a tooth-and-claw scramle for increasingly scarce and demeaning jobs. Though the novel is mawkish at times and contains an element of young-married shtick — Lammchen doesn’t know how to cook; Sonny blows a bundle on a dressing table — it is also genuinely funny and moving and melancholy in its depiction of that vanished world.

Fallada was a Dickens and Dostoevsky man. He possessed a similar, inspired vision of the small, resolute doings of the ungreat, of the workers and lower-middle-class people who make their lives as they can amid the heedless, side-swiping forces of economic might and institutional caprice. There is hardship aplenty in Little Man, What Now? but not bleakness. For that, one turns to Every Man Dies Alone, Fallada’s last novel, set a decade later and published shortly after the writer’s death in 1947. It is now translated for the first time into English, beautifully so, by the distinguished poet and translator Michael Hofmann.

The germ of the novel lies in a real case, that of Elise and Otto Hampel, who, after Elise’s brother was killed early in the war, began dropping subversive messages on postcards all over Berlin. To the fury of both police and Gestapo, they kept this up for almost three years until they were finally identified, arrested, tried, and executed. Fallada does not stray far from this grim outline, except in one critical detail. In the real case, the authorities became convinced that the postcards must be the work of a widespread group of subversives; in the novel they believe it is one man. Indeed, the crime seems more outrageous for its very puniness and the more galling that something so paltry, so irksomely obstinate, so clearly the work of one little man, cannot be stopped.

Otto Quangel, married to Anna, is a foreman in a furniture factory that now makes crates for bombs and, later, for coffins. The couple are devastated when they learn that their son has been killed in the invasion of France. Otto is determined to fight back in his own small way, to undermine the regime and the war effort by dropping short messages in public places all over Berlin. The first card, he tells Anna, will read: “Mother! The Führer has murdered my son.” She shivers; it was, she thinks, “Otto’s absolute and irrevocable declaration of war?war between, on the one side, the two of them, poor, small, insignificant workers who could be extinguished for just a word or two, and on the other, the Führer, the Party, the whole apparatus in all its power and glory, with three-fourths or even four-fifths of the German people behind it.”

The Quangels know that many of the cards will be handed in to the authorities immediately, but they also believe that perhaps they will kindle resistance. “In the end,” Otto tells his wife, “scores of people, hundreds, will be sitting down and writing cards like us. We will inundate Berlin with postcards, we will slow the machines, we will depose the Führer, end the war?” But no. The cards are quickly turned over to the authorities by terrified citizens who can’t get rid of them fast enough; and it strikes the police that it should not be difficult to apprehend the culprit behind them. Still, months pass, a couple of years, and the cards continue, one or two a week.

Meanwhile the cast of characters expands further, drawing more and more people into what becomes a huge saga. Among them are the other occupants of the Quangel’s apartment building: A Jewish woman whose husband has been dragged away by the Gestapo and who cowers alone in her wretched apartment, overstuffed with the goods from their former life; the unwholesome Persicke family, the eldest son a Nazi cadet, the father a Party functionary and drunken bully; Emil Borkhausen, a sneak and a blackmailer, living off his prostitute wife; and Judge Fromm, retired and representing a vestigial trace of justice and honor. One should say at this point that, though the novel’s theme is that death is the only freedom remaining under the Third Reich, the way is paved with terrific suspense, lively vignettes of Berlin life, and some very funny episodes, especially those in which the several schemes of its many sleazy opportunists are foiled.

Beyond the apartment, people from all over Berlin enter the frame, among them the Quangel’s son’s fiancée, Trudel, who eventually marries another man and is with child, but becomes implicated in a postcard drop. “Ach,” she says about Otto, “I wish Dad didn’t do such stuff! Doesn’t he even think about the trouble and fear he inflicts on people? Life is difficult enough as it is!” Like the couple in Little Man, What Now? she and her husband try to escape into their own private happiness, but what was possible for the Pinnebergs is no more: “They were like a pair of lovers clasped together in a flood, with waves and currents, collapsing houses and the bloated corpses of cattle all around them, still believing they would escape the general devastation if only they stuck together. They had failed to understand that there was no such thing as private life in wartime Germany.”

On the other side of the law, if so it may be termed, members of the police and SS react to the case in different ways. It may not be a far-flung conspiracy, but it offers opportunity to drag people in willy-nilly, following “the watchword of the times: Everyone is guilty. You just need to probe for long enough, and you’ll find something.” The case fuels the paranoia endemic to all police states and it threatens careers and even the survival of committed Nazis. Among those is one Inspector Escherich, whose failure to find “the hobgoblin,” as he calls the unknown culprit, spells his own ruin: “He’s got to catch him;” he thinks, “he doesn’t care what happens afterward. He has to look this man in the eye; he has to talk to this man who has been the cause of his downfall. He wants to tell that fanatic to his face what panic, ruin, and hardship he has brought to so many people. He wants to crush him, his secret enemy.”

Like those of most people who survived the Nazi regime in Germany, Fallada’s record was not completely snowy. He rejected an opportunity to leave the country and altered one novel to create Nazi heroes to suit Goebbels — later defending himself by saying, “I do not like grand gestures, being slaughtered before the tyrant’s throne, senselessly, to the benefit of no one and to the detriment of my children, that is not my way.” On the other hand, he refused a request in 1941 to remove Jews and Communists, as well as Nazis (of whom he made sport) from a new edition of Little Man, What Now? By 1944 he was labeled “an undesirable,” was drinking ferociously, and was finally locked up in a psychiatric prison. Here he promised to finish writing a novel, about a 1920s banking scandal, that the Nazi Propaganda Ministry expected and, indeed, required, to be usefully anti-Semitic.

Fallada scribbled away under the eyes of his guards for weeks in lines of tiny script, criss-crossing each other to near indecipherability. The result was The Drinker. Eventually published in 1950, this is the horrifying, though often mordantly funny, story of a man who turns suddenly to drink, ruins himself and his wife, and eventually kills himself in an especially revolting manner. It might also be summed up as a study in self-loathing, surely driven by Fallada’s disgust with his existence under the Third Reich. His experience of the fear and sense of impotence, futility, and self-revulsion finally became overt in Every Man Dies Alone, infusing it with a brilliantly bleak irony and terrible power. Upon finishing the novel, Fallada justly declared, “I have finally got it right.”