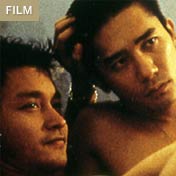 Let’s start over. These are the decisive words on which the craterous relationship flaps between the two male lovers in Wong Kar-wai’s Happy Together. The film, which has recently been reissued by Kino Video in a remastered edition, scored Wong a Best Director award at the 1997 Cannes Film Festival. Viewers fond of on-the-rails plotlines may by miffed at the film’s whimsical ways, as when, for example, it cuts from a character reflecting on his geographical position to a series of upside-down shots that correspond to his imaging of what his native city on the opposite end of the globe would look like from such a vantage point. (Speaking with regard to the fact that the film turned out differently than what Wong initially had in mind when he began shooting, the critic Jonathan Rosenbaum wrote, “Happy Together is less a film with a subject than a film about not being able to find one.”) Conversely, for those from whom a so it goes falls readily from the lips, Happy Together should have the gummy immediacy of a weepy nose; its free-floating construction is advantageous toward its depiction of a chaotic, distance-pursuit relationship. Primarily set in Buenos Aires, the movie follows the story of two émigrés, Lai Yiu-Fai (Tony Leung) and Ho Po-Wing (Leslie Cheung), who leave Hong Kong to reinvigorate their bond. After a futile attempt to take a road-trip to a waterfall, Ho decides they should break up, but their cycle of separation and reconciliation is not over. Although their story is filmed in an alternating palate of black-and-white and sun-stroked colors, their relationship never feels inauthentic or diffused by the director’s compelling studiousness.