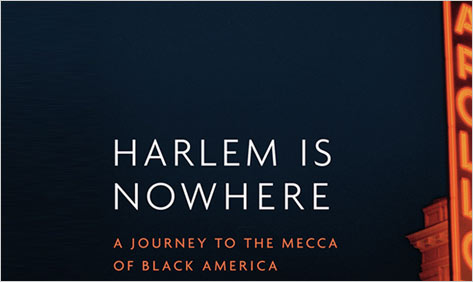 In an undated,unpublished essay entitled “Adventures of an Unintentional New Yorker,”a young Oklahoman named Ralph Ellison recounts his arrival in Harlem in the1930s. “I learned that almost anything could happen on 125thStreet,” Ellison writes. Living in Harlem, he maintains, “was anexciting and oppressive experience”—exciting because it offered thecomfort of racial familiarity coupled with the illusion of freedom amidstsegregation, oppressive because that same comfort and illusion threatened tohold him back from the world beyond. Harlem embodied both limitation andliberation for Ellison, a tension he would later explore in his classic 1952novel, Invisible Man.

Seventy years later, ayoung Texan named Sharifa Rhodes-Pitts journeyed to a Harlem vastly changedfrom the one Ellison had come to know. In Harlemis Nowhere, which takes its title from Ellison’s 1946 essayof the same name, Rhodes-Pitts offers a stirring exploration of Harlem’sgeography, actual and imagined. The eight essays that comprise the book eachdraw from a source of inspiration, be it a photograph of a 1920 Harlem streetscene, the fictional characters that people the novels of Harlem Renaissanceauthors, or the “Dream Books” that match anything your subconsciouscan conjure with a number ready to wager in Harlem’s street corner lottery.

With so much attention onthe past, one might expect Rhodes-Pitts’s tone to be elegiac. But an activiststrain in the book compels us inexorably toward the present. Rhodes-Pitts’s Harlemof 2011 is another country from Ellison’s Harlem of 1936, one inwhich the shape of Harlem’s future—as a black community, as a cultural mecca—isfar from promised. “It all comes down to a point that is as simple as itis terrible,” Rhodes-Pitts writes near the book’s end. “It is a factthat closes in on itself, like the mythical serpent that devours its own tail:This is our land that we don’t own.” The dual threats of gentrificationand cultural amnesia risk eroding a rich history and displacing the generationsof black Americans for whom Harlem is home.

Channeling Ellison—butalso Langston Hughes, Zora Neale Hurston, and many others, familiar andnot—Rhodes-Pitts crafts a compelling narrative voice that is bracingly intimateyet capable of dilating to encompass a chorus of voices and opinions not herown. We come to know Rhodes-Pitts as a bookish young girl, growing up in WestTexas, who compiles her own reading list of the work of Harlem Renaissanceauthors. We later see her as a young woman newly arrived in Harlem, “Miss GreatMigration 2002” as one of her friends jokes, or what Ellison might havecalled an “inside-outsider”: increasingly at home in her newfoundcommunity, but retaining a certain difference that allows for freshperspective.

Thisis a book driven by that perspective, one that asks us to share the wonder withwhich it looks upon the everyday realities of the Harlem community. Its successrests upon Rhodes-Pitts’s ability to persuade her reader to join in herjourney. Are we willing to sit with her in the reading room of the SchomburgCenter as she sifts through yellowing newspaper clippings, a maze of historicaldetritus? Are we, too, struck with wonder at the motivational credos that anunnamed man, whom she dubs the “Messenger,” scrawls in colored chalkon the sidewalk for the betterment of Harlem’s youth? Are we moved by thestories of the everyday people she meets, on the street and on the stoop, whohave lived most of their lives within the span of four square miles? It is atestament to Rhodes-Pitts’s achievement that, more often than not, we are.

Unobtrusive butever-present, Rhodes-Pitts’s narration provides an essential unifying elementto a book that at times risks coming apart of its own eclecticism. Whateverlimitations this work has are in part a consequence, however, of its chosenform. As a collection of loosely connected essays, Harlem is Nowhere allows Rhodes-Pitts to elide certain basicconcerns that other genres—the memoir, for instance, or the novel—would haveinsisted that she confront. Most notably, what’s missing is a sense ofevolution in the narrative voice, a sense of how the myriad experiences ofHarlem have reshaped her perspective, and how they might, in turn, reshapethose of her readers. I left the book hungered but undernourished, still inwant of the soul-sustenance that Harlem—and I would venture to sayRhodes-Pitts—has in abundance.

Adam Bradley is the authorof Ralph Ellison in Progress and the co-editor of Three Days Before the Shooting . . ., the posthumous edition of Ellison’s unfinishedsecond novel.