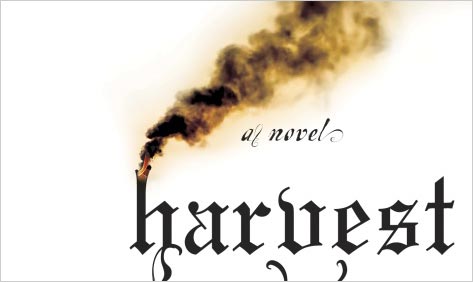 The narrator of Jim Crace’s new novel, Harvest, introduces himself and his neighbors as plain, quiet folk. “We’re not a hurtful people hereabouts,” Walter Thirsk declares of an eighteenth-century community that is “…two days by post horse” from the nearest market town. Before summer has turned to fall, however, Walter’s isolated English village will be convulsed by murder, rape, and mutilation. The land he loves will be home no longer.

This brooding tale opens innocently enough. “Two twists of smoke at a time of year too warm for cottage fires surprise us at first light,” Walter observes. One comes from a strangers’ encampment, the other from the village lord’s dovecote, maliciously set alight. The fires will have dreadful consequences, but Crace lets the machinery of tragedy idle while he describes the nature of each. “Their fire is damp,” Walter notes of the encampment’s signal. “They will have thrown on wet greenery in order to procure the blackest plume, and thereby not be missed by us….” Master Kent’s dovecote blaze, by contrast, consumes “…ancient wood. Long-felled. The years are in its smell.” In a few brief sentences, Crace reveals not only what these people see but also how they see it (or smell it). Describing a summer night, a velvet shawl, a field of barley, or a skittish horse, he compels us to view this world through pre-modern eyes, slowing the narrative to walking pace as he ratchets up the tension.

Conflagration prompts action. Within hours, the villagers, “…too rooted in their soil….to be at ease with newcomers,” demolish the new encampment but are briefly chastened by the arrival of two men with bows drawn. A woman emerges from the ruins, “…her black hair further darkened with a wound,” transforming the encounter into “an occasion of shame.” Only Mr. Earle, scribe and mapmaker to Master Kent, behaves gallantly. And he will later pay dearly for his goodness.

Accused of arson and theft, the two strangers are clamped in the pillory, but the wounded female vanishes. “A woman cannot do you any harm,” Master Kent is assured by his brutal, usurping cousin. By this time, however, Kent’s beloved mare has been viciously killed, and more human blood will soon be spilled. “A mighty storm of reckoning was on its way…,” Walter frets, and Crace allows it to break with terrible force.

The novel’s soaring drama remains rooted, however, in a landscape that is rhapsodically evoked. “From the lane,” Walt reports on harvest day, “looking down toward the tracery of willows on the brook, the top end of our barley meadow, bristling and shivering on the breeze, showed us at last its ochers and its cadmiums…. And the smells, which for so long in this slow summer were faint and damp, became nutlike and sugary.” This could be a description by Mary Webb or Thomas Hardy. Certainly Crace is at his most lyrical here, depicting a land and people about to be plowed under by progress, as common fields are enclosed for sheep pasture. Contemplating the map drawn by Mr. Earle, Walt sees what it cannot record. “He hasn’t captured time,” he observes, “how long a walk might take…how long the seasons or the nights must last.” In Harvest, however, Crace has done just that.

Previous Previous Post: Gravity's Rainbow Appears
Next Post: The Searchers: The Making of an American Legend Next