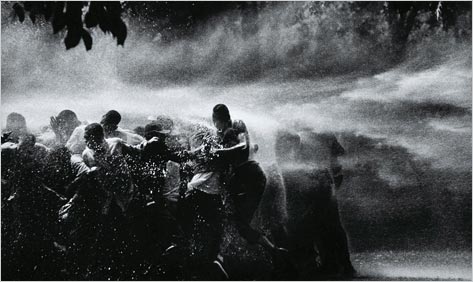 Perhaps it’s the onset of fall, and the twingesof research and studiousness that blow in with cooler air, but I find mythoughts lately returning to historical poetry. I’vebeen wondering how poetry can conjure the past, and what poems do with thatsummoning power. This summer on one chapter of an occasional quest to readthrough Shakespeare, I enmeshed myself in hisyouthful, not-always entertaining Henry VI trilogy.Frequentlydated as Shakespeare’s earliest plays, they dramatize warsin France that resulted in the burning of Joan of Arc; internal feuds that ledto the War of the Roses; and culminate in the rule of despot Richard III.Theunfolding events plunge into a maelstrom of civil war, but also provoke us withquestions: Where, among the profusion of events chronicled, do we find the essenceof history? What deeds should we observe—the enormity of the conflict or thetragic fates of individuals?

It’s a question we canalways keep asking ourselves. Shakespeare, bound to the court, often dramatizedlife by focusing on rulers, on their jostling, ambitious coterie.Bycontrast, American poets, in this court-less democracy, have been remakinghistory for the common man almost as long as they’vebeen writing on this continent. Examining our upstart nation’s history, theyoften focus on what (and who) we are leaving out. One thinks of Muriel Rukeyserdocumenting labor histories in verse, William Carlos Williams writing a paeanto Paterson, New Jersey, or Whitman and Melville writing versions of our ownCivil War. Whitman lovingly described the bodies of dying boys, even as heclaimed “The real war will neverget into books.”

Whitmanhints at something that has preoccupied—and even tormented—Americanpoets ever since: the question of what canand can’t be said, what—andwho—our official histories exclude. American poetry that takes on “thehistorical” is often preoccupied with marginsand remnants. In fact, the number of booksthat work along these lines in recent years are staggering: Tyehimba Jess’sLeadbelly croons an early historyof the blues; Frank X. Walker’s BuffaloDance revisits the journey ofLewis and Clark from the perspective of York, Lewis’s enslaved attendant;Martha Collins’s Blue Front retraces the history ofone horrifying lynching in Cairo, Illinois; Jill McDonough’s 2008 Habeas Corpus crafts a sonnet for eachprisoner who has been executed in the history of American emprisonment. Natasha Trethewey’sPulitzer Prize-winning Native Guardinterweavesher own family history with the struggle of the black Mississippi soldiers whofought for the North during the Civil War.

Thisyear offers its own crop of books that invite us into acts of common—or uncommon—remembrance. ApproachingIce,ElizabethBradfield’ssecond book, traces two hundred years of Arctic Exploration, “readyto be amazed… longing for it.” Reminding us just howrecently we fumbling humans have reached the polar regions,she uses ice, and the hunt to find the great magnetic north, as the ultimatesite that dramatizes both human quests and limitations. We, likethe early polar explorer John ClevesSmith, move in lands where “sudden transformations”are expected, pressing our “human face against thefrozen wall of what/ is known.” Atonce erotic and unnatural, scientific, and humane, the work presents abeautiful and grim and threatened lexicon of ice and icebergs. Examining “theage-old lust for places/ we pretend are free of consequence,”Bradfield also reminds us of our ultimate limitation—mortality—and of the fainthuman traces any of us, even the boldest, leave.

CamilleDungy’sSuck onthe Marrow also begins on a fieldof faint traces. It has to—it is talking about people history hasn’t recorded, a painful  chapter of American life inwhich free and freed blacks were captured from the North and sold back intoslavery. Re-imagining these lives, Dungy offers us a haunting song cycle—adrama no less well-plotted than a play’s,but one that emerges in snippets of imagined letters. These poems are not aboutKing anybody, but “Joseph Freeman,”captured and sent South; his wife, Malinda, left to grieve without explanation,and Molly and Shad, who brave love on a Virginia plantation. Dungy’s versesings into absence, into places she’senvisioned out of newspaper marginalia.  Here are the sobering words of “TheTrapper’s Boast”:”Give me a crowd ofcolored men and I can spot the new arrivals—/ freed men or fugitives—/ I cantell them from those born with a claim to their flesh./…  My mark is the colored man at ease withhis freedom.”

Atthe end, where notes would normally document research, Dungy plays with usagain—her references, to research and to her own hunt for information—arethemselves a poem that stresses the task of representing incompleteness.

Anotherpoetic document ofhistory’s gaps, Jake Adam York’s forthcomingPersons Unknown narrates the author’sown hunt through Mississippi and Alabama for sites of the martyrdoms of theCivil Rights era. His book is the secondinstallation of this project, written after a chilling debut, A Murmurationof Starlings.47 years after the1963 church bombings in Mississippi killed foursmall girls, York is hoping to write more hidden victims—oflynching, of Civil Rights beatings— “backinto history.”

Whetherreimagining a king or a forgotten murder victim, an explorer, a bystander in alynching, all such poetry implicitly asks: What role can poetryplay in common remembrance? What can it tell us about our ownhumanity? Can this writing make the wrongs doneright? Can revisiting the site of a river thatswallowed a lynched man, staring into its glassy surface, serve as memorial?InPersonsUnknown, York’s tortured answeris both yes and no. He’sfull of a paradoxical awareness of what’sbeen erased and a plea to remember more. And in some cases, Yorkargues that what we remember itself has to be imaginary. Standingat the place where the body of Mack Charles Parker was recoveredfrom the Pearl River in 1959, York writes:

Seekinga cruelty that’squite literally hidden in plain sight, a murder that lingers just below thesurface of our daily life, York asks us to rememberwhat we “cannot hear.”Suspendedin such a space, York upends neater histories, and even upends himself. “Walkingdown the street he “catches that curve/ in awindow or a windshield/ that wrecks my face/ so for a moment/ I can mistakemyself/ for a redneck at the end of a joke.”

Thespeaker of these poems is no deformed despot—not a Richard-like murderoustraitor to his throne or country. But he is a troubled narrator, one who wantsto use the discord he feels within himself to stir the waters of the past, sothat individuals overwhelmed by history’sriver don’t get forgotten. Hetries to recapture a story that is and isn’tabout him “with a memory/half myown.”

York, Dungy, andBradfield—no less than Whitman or Shakespeare—explorewhat it means to remember in verse. In doing so, they’retaking part in an old tradition: after all, Clio, history’smuse, was the sister of Calliope and Erato, the muses of epic and lyric poetry.Allwere daughters of Mnemosyne, goddess of memory. Asour current poets struggle with what—or how, or who—to remember, they also mineold rifts in history, helping at once to expose and to heal them.Attheir best, they also create new language for memory, upon which even the mostforgetful nation can draw.