Hieroglyph: Stories and Visions for a Better Future 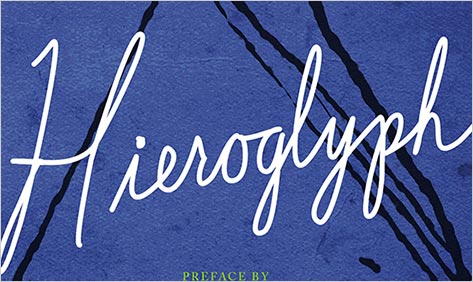 Is humanity headed toward grim perdition, toward total collapse of civilization and the biosphere and the extinction of our species? Or are we embarked on a bright-eyed course for a post-scarcity, post-human, Singularity-awesome utopia? Or is there a third path, the one I consider most likely: that somehow we shall muddle on as we have always muddled on — superficial things different, living conditions trending upward for the masses, the human heart and soul eternal, the future a nigh-unpredictable mix of wonders and tragedies, achievements and failures, laughter and tears?

If you have been reading much science fiction over the past two decades, you might have gotten the impression that the first path outlined above — leading to utter rot and degradation — was the only likely one, agreed upon by all savants and visionaries. Dystopias and apocalypses of various stripes have dominated the bestseller lists and screens. This is a supreme irony, of course, for once upon a time, and for many continuous decades, science fiction was regarded as all Buck Rogers optimism, facile pie-in-the-sky dreaming and Heinleinian competent-man supremacy — although, truth be told, the fledgling genre had always been weaned at the cautionary bosom of Mary Shelley and her Frankenstein.

But nowadays, science fiction that dares to believe in and portray progress and the inherent rightness of technological civilization occupies a distinctly minority position. And with this paucity of positive dreams arguably comes a dearth of inspiration for real-world ambition and accomplishments.

This seesaw state of affairs, with the two avatars of SF eternally changing places, now up, now down, has always been an issue in the field. It was articulated in its current form as early as 2001, with the publication of Judith Berman’s “Science Fiction Without the Future.” There, she succinctly identified the problem: “Golden Age SF: hope for the future of technology. Millennial SF: fear of the present, fear of technology? If this is what’s happened, no wonder younger readers aren’t drawn into the field.”

A few years later, in 2006, Kris Rusch contributed her essay “Barbarian Confessions” to Asimov’s magazine. There, she lamented:

[In] the dark days before literary tropes hit sf . . . the sf and fantasy genre had the same goals. Large-scope stories, in which worlds or universes were at stake, created new but oddly familiar settings that were far enough removed from real life so that readers could escape their mundane existences. The lead character was not the protagonist; he (and it was usually a he) was the hero. He often followed the hero’s journey (see Joseph Campbell, whom Lucas says he gleefully plundered). No matter how dark the journey, the reader will follow the hero because, the reader knows (and is reassured on a deep level) that the hero will triumph at the end. When literary tropes hit sf in the 1960s, solid characterization, good sentence-by-sentence writing, and dystopian endings became commonplace. “Realism,” both in character actions and in scientific approach, became more important than good storytelling.

Partly in response to these laments, I believe, editor Jetse de Vries compiled Shine: An Anthology of Optimistic Science-Fiction, which serves as a useful forerunner to the book at hand here, and deserves reconsideration by those interested in the theme.

But the controversy hit critical mass, and a higher public profile, only with the appearance of Neal Stephenson’s essay “Innovation Starvation” in 2011, in part because of that essay’s more mainstream venue, the journal of the World Policy Institute. A rousing summary of how the culture had gone off course in terms of getting big stuff done, Stephenson’s polemic was both an indictment of most current science fiction and a call to reverse the trends towards despair, nihilism, and naysaying. Putting his money behind his beliefs, Stephenson inaugurated the Hieroglyph Project to educate, inspire, and reform along those technophilic, blue-sky lines. Their first tangible accomplishment is the anthology before us today. 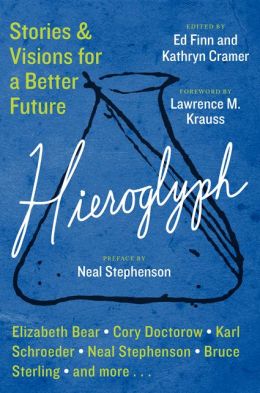 Stephenson wisely handed off the project to two talented people:  Ed Finn runs the Center for Science and Imagination at Arizona State University and provides an interface with academia and working R&D folks. Kathryn Cramer is simply one of SF’s best anthologists and an expert in the literature, connected with many creators. Together, in Hieroglyph, they have managed to give life to Stephenson’s visions.

We begin with a scientist’s perspective on the whole project, as physicist Lawrence Krauss delivers a fine essay distinguishing between actual science and the literature modeled on it. This is followed by a reprint of Stephenson’s essay that got the whole ball rolling. We learn why “hieroglyph” is used as a token:  because the Big Ideas of SF are compacted sigils of meaning.  Last in the apparatus comes a fine introduction by the editors.

Seventeen stories, buttressed by helpful and intriguing afterwords and links, form the core of the book. Each one goes at the common goal in an individual, complementary, synergistic manner.

Stephenson himself leads off masterfully with “Atmosphæra Incognita,” the story of the building of a twenty-kilometer-high steel tower. Narrated blithely by a charming female character whose non-science background implicitly shows the allure of such projects for every citizen, the piece is a compressed epic, spanning decades, full of drama and humor.

Kathleen Ann Goonan is a strong follow-up with “Girl in Wave:  Wave in Girl,” which starts out in a utopian future but then leaps into the back-story of the bad old days when brain engineering was just being perfected, under assault from know-nothings and frightened reactionaries. Third in the lineup is Madeleine Ashby’s “By the Time We Get to Arizona.” The tale of a married couple striving to circumvent the bureaucratic surveillance games enacted in the U.S.-Mexico border town of Mariposa, Ashby’s tale features a different vibe from its predecessors, trying to have its dark cyberpunk dystopia and eat it, too, pulling the plot chestnuts out of the fire at the last minute. It’s more a testimony to thwarting bad systems than to building new and better ones.

Cory Doctorow, a prime exponent of gonzo positivity in his novels, brings us one of his lateral rethinkings of the genre’s classics with “The Man Who Sold the Moon.” Starting with current-day maker culture, Doctorow charts a long, slow path to colonizing the moon, strewn with poignant personal sacrifices, triumphs, and setbacks. “Johnny Appledrone vs. the FAA” from Lee Konstantinou examines the risks that every new technology runs when terrorists misapply it, and how the innovations can be reclaimed by the forces of good. Karl Schroeder shows us the “rewilding” of politics in “Degrees of Freedom.” Set in the Canadian Northwest, Schroeder’s dense and affecting story depicts in thoughtful detail various new organizational methods and technologies by which the crucial tasks of government can be streamlined and made foolproof.

Taking a partially documentary approach to her topic, Annalee Newitz delivers “Two Scenarios for the Future of Solar Energy,” rendering vivid her future bio-metropolises. Geoffrey Landis gives us visionary adventurers and entrepreneurs who decide that establishing “A Hotel in Antarctica” will provide a good trial run for setting up a Mars colony.

The next two stories venture farther into the future than prior ones. This relative restraint in looking too far ahead seems implicit in Stephenson’s desire to stimulate immediate real-world outcomes rather than unattainable space opera daydreams. But James Cambias and Gregory Benford prove just as hardheaded and realistic as those writers with closer horizons. Cambias offers “Periapsis,” set on one of the moons of Mars. His youthful protagonists, involved in exotic career-determining competitions, bring in some of the Heinlein/Scribners YA feel that Stephenson is implicitly nostalgic for. Benford’s “The Man Who Sold the Stars” chronicles the brawling, daring exploits of Harold Mann and his wife, Sara, across a century or two of pushing mankind into the solar system and beyond, rather in a Poul Anderson manner — another literary star to steer by in this mode.

Vandana Singh delicately limns a wide response to climate change — on the seas, in the rain forests, and elsewhere — with her melancholy but bracing tale “Entanglement.” With “Elephant Angels,” Brenda Cooper ventures into a consequential field her peers did not choose to focus on: the conservation of wildlife in a stressed-out future. Miraculous advances in penal technology are considered by Elizabeth Bear in “Covenant,” and they involve a kind of brain hacking unforeseen by the crude methods of Anthony Burgess in A Clockwork Orange. Staying in the realm of brain mods, Rudy Rucker explores “quantum telepathy” in an outtake from his seriously screwball novel on the same theme, The Big Aha.

David Brin’s “Transition Generation” is a kind of futuristic and blackly comic Death of a Salesman, as our obsolescent hero tries to stay abreast of the Young Wired Turks in his enterprise.  Charlie Jane Anders, in “The Day It All Ended,” starts with something like Dave Eggers’s scenario in The Circle and inverts it for wild and dramatic utopian effects. Finally, in a beautiful bit of symmetry, Bruce Sterling contemplates, like Stephenson, a “Tall Tower” but invests his version of such a structure with a kind of Cordwainer Smith/Clifford Simak mythic sensibility. And to parallel the Krauss foreword comes similar endpaper musings from another physicist, Paul Davies.

Varying in angle of attack, subject matter, and scale of granularity, these several stories all unite in declaring that our problems are not terminal but subject to remediation, if only we muster a certain daring shirtsleeve experimentalism.

Readers interested in pursuing more of this type of inspirational and aspirational SF can always turn to the evergreen classics by folks such as Asimov, Heinlein, Vance, Anderson, Niven, Clarke, Clement, and practically any writer from the ranks of SFWA Grandmasters. Additionally, tracking down further works by the seventeen authors herein will pay dividends.

But beyond that list, at least a few more names and works can be cited. William Forstchen’s Pillar to the Sky, about the construction of a space elevator, is a rousing can-do novel. Kim Stanley Robinson thinks about tomorrow in terms of both technology and utopian politics. Jack McDevitt’s space operas focus less on Star Wars–type shenanigans and more on problem solving. Famed for his Culture novels about a post-scarcity future, the late Iain Banks wrote wonderfully in this mode. John Varley’s recent books continue his 1970s optimism. Hannu Rajaniemi‘s post-human trilogy is full of exuberance. The novels of John Wright embody a belief in the transcendence of the human spirit. Ian McDonald’s big novels about the near future in various spots around the globe, starting with River of Gods, stand as portraits of a fully functional future.

But these are just a handful of the not unsizable — and growing! — band of yea-saying SF authors who are working to show that, in the words of Stephenson’s tower builder, “We can do anything we want.” At least in fiction, that assertion is unassailably true.

Previous Previous Post: Spotlight on the Queen
Next Post: The Smell of Battle, the Taste of Siege: A Sensory History of the Civil War Next