How I Became a Writer in a Family of Scientists 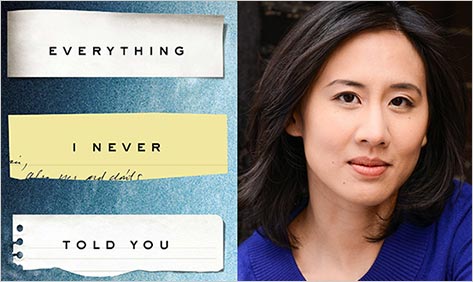 One of my favorite family photos is of us at the breakfast table: my father bent over a magazine, my mother with a book in one hand and a half-empty bowl of soup noodles before her, me obscured by a paperback, my completely forgotten breakfast grown cold. My sister, home from college, took the picture, amused at how engrossed we all were. Her own half-read book, which she’d set down to pick up the camera, lies facedown beside her plate.

My father was a physicist, a researcher for NASA. He was, literally, a rocket scientist. My mother spent years as a chemist, teaching graduate students and running her own research lab. My sister went to Princeton and became a mechanical engineer.

I, on the other hand, scribbled stories in notebooks. I wrote poems. My sister jokes that my teenage rebellion was to join a Shakespeare club. I chose the most impractical major possible, as far as my father was concerned. English, he said. What do you need a degree in English for?  You already speak English! He was only half kidding. Later, when I decided to apply to grad school for creative writing, my worried mother consulted a colleague from the English Department about my job prospects. Afterward, she emailed me to say it was okay, as her friend had assured her an MFA would qualify me to teach “writing and other Artsy Stuff.”

How could a writer come out of such a practical, scientific family?

That’s easy; as scientists, my family firmly believed in the importance of learning and being curious. This meant we read constantly.

At home, books were everywhere. I had four bookshelves in my room alone. In the basement, bookshelves lined an entire wall. Every now and then my father would buy some pine boards and make another shelf, but there were never enough. They were crammed so full that eventually we resorted to putting them in sideways — this maximized space — and then adding a second layer of books, obscuring the first, so that we had to remember which titles were behind which. And we were always getting more. My parents gave me books as rewards: if I brought home straight A’s, I’d get a book of my choice. This was a needless bribe, because I always got straight A’s and they bought me books all the time anyway. Whenever we headed to the mall, our first stop was the tiny B. Dalton, no matter what had brought us there. Sometimes we’d stay for an hour or more — my dad in the history section, my mom browsing the mysteries — each of us slowly accumulating a stack of books that were too interesting to leave behind. When it was time to go, I would present my finds to my parents for approval. We didn’t have a lot of money, but I never remember my parents ever saying no to a book or telling me I’d found too many.

I’ve found that people who don’t know much about science assume scientists are obsessed with boring machinations and graphs, interested only in the practical. The opposite is really true. We often think of science as being about fact, about ration and reason and quantification, but it is equally invested in the joys of mystery and discovery: finding out how the world works. That’s why my parents loved reading so much, and why they encouraged me to read prolifically and widely. We had books on science, yes, with titles like Lagrangian Dynamics and More Surprises in Theoretical Physics and Consider a Spherical Cow — but we had books on cooking and Chinese history, Dickens classics and word games, collections of Georgia O’Keeffe paintings and guides to making paper airplanes.

Here’s an example: as a kid, I once had one of those drinking-bird toys — blown glass, filled with red liquid — that dips its beak into a cup of water, rises, and dips again. When he saw it, I think my father, the rocket scientist, actually giggled in delight. He spent longer playing with it than I did, dipping the bird into water, trying ice water, then warm, puzzling over how it worked. Eventually he published a scientific paper using the bird to illustrate some principles of thermodynamics.

More than anything, scientists are motivated by wonder. You see something that amazes you — whether it’s a comet in the sky or an ant carrying a leaf — and you are fascinated. You think, Where did that light come from? or How can it carry something ten times its size? You keep studying it and studying it because it’s so freaking cool you can’t stop thinking about it. What is this? How does this work? Why does this happen? Your search may take you into the outer reaches of space or the molecular structure of a protein, but at the end, we will understand one tiny piece of the universe, and it will be no less amazing because of it. In all probability, your search will illuminate more questions than it answers.

When I write, I’m motivated by wonder, too. Things happen that intrigue or mystify me; people do things that puzzle or perturb me, and I can’t stop thinking about it. I think, How could this happen? Why would a person do this? I keep studying and studying my characters, the twists of their personalities, the many tiny facets of their histories and the big, broad context of their lives. What kind of person is this? What’s going on here? At the end of a story, if I’ve done my job right, our understanding of how we — and the world itself — works gets a little bigger. We know a tiny bit more than we did at the start, but a good story, too, asks the reader more questions than it answers.

Growing up in a family of scientists, I learned to have an insatiable curiosity about the ticking of the world, a delight in small details, the desire to connect the particular to the cosmic — and a certain amount of gleeful play. When I think of it this way, perhaps my family wasn’t so unusual; perhaps all writers and all scientists are all, deep down, firmly related. We all want to know why things happen the way they do. We want to mess around and see what happens and see what we can illuminate. We all long to open up our universe just a little bit more.

The B&N Podcast: Charlie Mackesy on our Book of the Year
Previous Previous Post: West of the Revolution
Next Post: Death and Maslow Next