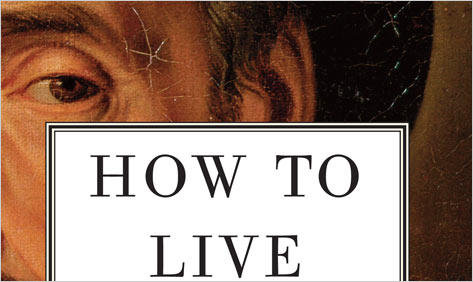 Earlyin her cunning reconstruction of Michel de Montaigne’s life (or perhaps moreaccurately, of his mind), Sarah Bakewell admits that in our age “the word ‘essay’falls with a dull thud.” Montaigne may have virtually created the form andwith it his own fame, but the essay brings the dread high school term paperbalefully to mind. It takes keen devotion and some sparkling writing to savethe essay (and its sixteenth-century inventor) from its reputation.

Not that Montaigne is abore who needs rouging up. He has disarmed readers over four centuries, asgeneration after generation “discover” him. In reading his musingsabout himself they find—themselves. “It seemed to me,” Emerson wrotein baffled admiration, “as if I had myself written the book, in someformer life.” A century later, André Gide said pretty much the same thing:”It seems he is my very self.”

Montaigne’s essentialdiscovery, still startling today, was that the self is not a problem, not evena subject, but rather a finely calibrated instrument whose purpose is to payattention to the world. Following that hunch, he made a very modern leap,writing steadfastly from the idiosyncrasies of his point of view. He provedthat individual consciousness constructs a mirror not just for the writer, butfor readers to see themselves as well..Montaigneweaves his way, seemingly at random, over the sun and shade of existence, usinghis own consciousness as a probe to enduring questions.

Bakewell begins, asMontaigne does, with the vexing classical philosophical question of how to diewell. It becomes for Montaigne the more immediate question of how to overcomefear of death, a terror that disfigured his youth. He tweezes apart the tangledstrands of his own near-death experience (a violent fall from his horse), andmeditates on the strangely relaxedsensation of letting go he experienced at that violent moment.

This is reminiscent ofTolstoy’s description of the wounded Prince André on the field of Austerlitz inWar and Peace, the uncanny calm, the free float of the selfknocked off its moorings. As Montaigne writes his way around his ownexperience, he finds there is, after all, nothing to fear: death itself, aspart of nature, supplies its own answers when the time comes.

The lifting of that terrorplunges Montaigne into his essential task—How to Live, the “One Question”that Bakewell poses, organizing her book into twenty “attempts” toinvestigate this mystery. Her word “attempt” is a salute to Montaigne’sproject, for the word he gave his writing—essai—didnot denote a literary form as it does for us. In French it simply meant—andmeans—”a try,” or as Bakewell jauntily puts it, to give something awhirl.  Montaigne’s essais are the opposite of set pieces. Theyare hops, skips, jumps. They meander, they circle back, they contradictthemselves, shift gears, come to full stops and lurch off again. In this thereader sees the one essential quality of the essayist: the mind at work (or atplay?), paying attention, attempting (that Montaignean word) to make sense ofsensation, observation, and perception.

Bakewell’stwenty “attempts” at answers (including Don’t worry about death; Pay attention; Read a lot, forget most of whatyou read; Be slow-witted; Keep a private room behind the shop; Be convivialwith others; Be ordinary and imperfect) provide staging areas where sheconsiders Montaigne’s project and life. Her tone is immediate andsearching—very much Montaigne’s tone. The scholarship necessary for the book isdeftly tucked into the narrative, never clouding the stride of what are, afterall, her own essays.

It is curious—something ofa tour de force—that only at the end does it occur that Bakewell has notwritten in the first person. Alain de Botton’s charming book, The Consolations of Philosophy (which includes a chapter on Montaigne), has manyself-referential gestures, but Bakewell suits up as a literary detective,searching out the mystery of Montaigne’s impulse without any autobiographicalvignettes (except in the acknowledgements, where she tells how she came to readMontaigne to begin with—completely by chance, in the off-hand style of hergreat model).

She has managed to bring “thefirst modern man” (as Montaigne is sometimes labeled) to life for our age,tipping in vivid quotations from the Essaisand giving the microphone to a writer who was, finally, all voice. Her book hasthe narrative pace and drive of a novel, perhaps because at its core a life isat stake. Whether it is Montaigne’s or Bakewell’s or the reader’s is impossibleto say, but that is the magnificent achievement of this beguiling book.

Patricia Hampl’s mostrecent books are The Florist’s Daughter and BlueArabesque, both named among the 100 “Notable Books”by the New York Times Book Review. Sheis Regents Professor at the University of Minnesota.

Patricia Hampl's mostrecent books are The Florist's Daughter and BlueArabesque, both named among the 100 "Notable Books"by the New York Times Book Review. Sheis Regents Professor at the University of Minnesota.