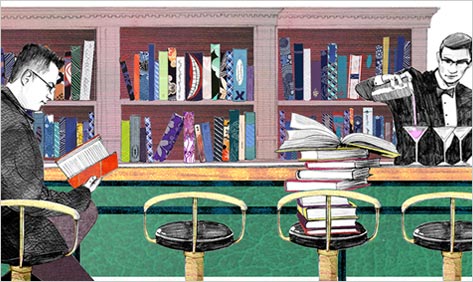 Writing is not easy. A good writer approaches the job with the utmost sincerity, knowing that it’s rarely as simple as putting pen to paper, finger to keyboard, or chalk to sidewalk. If you’re a first-time writer, or a veteran looking for help, here are the seven steps every writer must take in order to capture his Muse.

Step One: Free your mind.

The journey begins with a single step. Relax and focus your mind only on today’s work — not necessarily the first word, but even the first letter of the first word, or even just any old letter you’re fond of — instead of tackling the entire project.

Doesn’t a tall class of icy cold seltzer sound delicious right now? Maybe with a slice of lime? Your lack of seltzer is no doubt what’s holding you back from greatness. If only you had seltzer, then the words would pour out of you…like seltzer out of a seltzer bottle and maybe just as bubbly. Check the fridge. Maybe there’s still some club soda from the New Year ‘s Eve party. Is club soda the same as seltzer? What club served it first? That’s a pretty boring club. Am I right? Hahaha…yeah.

If you’re out of seltzer and/or limes, consider taking a trip to the store and procuring some. You should buy a few bottles in case your writing hits a hot streak. It’s strange that the store is never out of seltzer. Does seltzer go bad? It’s probably a recession-proof industry. Talk to your financial manager about this. If a runner is one who runs and a camper is one who camps, is a seltzer one who seltzes? Look this up when you get back home; it may be just the thing your first paragraph needs.

It seems silly to have driven all the way to store just for some bottles of seltzer and a lime. Don’t let the trip go to waste. Buy two or three limes and some other items you need. You know what goes great with seltzer? Everything. Go ahead and pick out some snacks, but nothing with cheese powder. Get some of those pickles you like, too. It’s OK if they’re not on sale. Treat yourself. A good writer will buy the lesser pickle; a great writer will demand to be satisfied. Which are you?

The pickles can be your reward for all the writing you’re about to accomplish. And the pudding. Get some pudding. Reward yourself with a six-pack of pudding cups — the packages that look like they have only three and then — surprise! They have six, three of them upside down. Ingenious! But the pudding-cup treat is ONLY if you finish writing 2,000 words today. Well, OK — if it’s past 3 o’clock, go ahead and adjust your word-count goals accordingly. Any deficit can be made up this weekend, or over President’s Day.

Seltzer should only cost about 79 cents a liter. Ever notice that the number 79 appears, like, everywhere? You will now. There should be magazines at the checkout. Buy some. A great writer must stay relevant. There is nothing sadder than an out-of-touch author unaware of trends in movies and in Sudoku puzzles.

Make the checkout line move faster by shifting your weight from one foot to the other and sighing impatiently. (This is what a lot of writers do.)

While waiting to check out, you can also use the time to formulate ideas and characters. The people in line with you could be the inspiration for you fiction. It’s OK to stare. This is how Fitzgerald would develop his characters, maybe. There’s this old lady fumbling in her purse for her Club Card. She has on sunglasses! Come on — a character bonanza wrapped up in an outsize winter coat that smells of mothballs. Figure out a mnemonic so that you won’t forget to put her in Chapter 2. How about “What a card! She probably doesn’t even like club soda. Or seltzer. The only way to figure out how big a moth’s balls are is to examine them in the sun…”?

When you get to the cashier, you and your seltzer, buy some batteries too, because you never know. Keep the receipt because you feel in your heart that you can adequately explain to any IRS agent that if ever there was a business expense, this is one. But be prepared to retreat to only the seltzer as a deductible.

Return home and move on to step three.

Go ahead and eat a pudding cup. The sugar rush will inspire. There are five left, don’t forget — not just two, as a less observant individual might surmise.

You may have missed something while you were out preparing to be a writer. Who knows — maybe Groupon is offering 50% off on a literary agent’s commission.

You’ll want to pay careful attention to any noises in and around your work area. In particular, keep your ears open for clicks or hums and spend the required time first investigating the sound and then abolishing it by turning something off or going back out to the store to buy earplugs. It will no doubt be a different store, more than a mile away.

Eat a celebratory pudding cup. If you didn’t write anything today, you should still enjoy the pudding. Simply deduct one pudding cup from tomorrow’s reward.

Invite some friends over — fellow-writers. They will all be as ready as you are to watch the NFL League Championship games, even if they are a few days away. You will almost certainly get some great insight into human psychology and innovative cursing.

This one took Dan Bergstein three pudding cups to write.

The B&N Podcast: Charlie Mackesy on our Book of the Year
Previous Previous Post: Feng Shui: Secrets of Chinese Geomancy
Next Post: Bellamy's Looking Backward Next