By JEFFREY B. PERRY 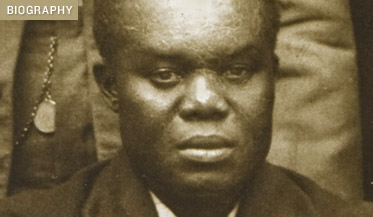 In the early years of the 20th century, Hubert Harrison was among the country’s best known and most brilliant African-American intellectuals. His reflections on the state and methods of literary criticism appeared in The New York Times. Scores more essays ran in scores of other publications. He lectured on history, sociology, and popular science to audiences both black and white — quite literally in the street, at times, where he drew large crowds and worried the police. Any heckler who dared to challenge Harrison soon thought better of it; his witty replies reduced them to laughter, if not shamefaced silence. Well before the Harlem Renaissance, he worked out ideas and strategies that would echo in the civil rights struggle and the black power movement of later decades.

But by then, the source of that echo was long forgotten; Harrison had disappeared from the story of the struggle for racial justice and meaningful democracy. The circumstances are so paradoxical that it hurts. For the very qualities making him such a catalytic force — independence of spirit, headstrong radicalism, and love of argument for its own invigorating sake — also made him enemies. There is a price for speaking one’s mind, and Harrison paid it. Following his death in 1927, no tribute to him appeared in the country’s most prominent journals of African-American thought.

This intriguing figure has been rediscovered only over the past decade or so, thanks almost entirely to the efforts of Jeffrey B. Perry. If ever a scholar has served as recording angel — rescuing memory from the ruins of time — it is Perry, who spent decades researching Harrison while employed as a postal worker. In 2001, he edited The Hubert Harrison Reader, which provided a generous selection of writings otherwise scattered in crumbling periodicals, many of them now very rare. His new book, Hubert Harrison: The Voice of Harlem Radicalism, 1883-1918, is the first part of a two-volume biography.

It portrays not only the life of a complex individual but also the world of a lost civilization. To see Harrison whole means reconstructing an era when self-educated young black intellectuals created literary societies to exchange books and argue over them — an era when open-air meetings gathered around street-corner orators who lectured on evolution, feminism, and other controversial topics.

Born on the small Caribbean island of St. Croix in 1883, Harrison was in many ways like other immigrants who reached the United States in 1900. He was “thwarted by limited educational, political, and occupational opportunities at home,” as Perry puts it, and possessed of both “a desire for more education and a propensity for self-education.” He found work at the post office in New York while attending high school classes at night, where he soon won acclaim for his oratorical skills and “exceptionally thorough” command of classical and English literature.

That Harrison did not continue to university studies is something of a puzzle. But it is clear that Harrison found ample exercise for his talents in African-American literary circles, and in the growing Socialist Party, which by its peak in 1912 had elected hundreds of candidates to office around the country. He wrote theoretical essays showing a deep interest in contemporary social thought, bourgeois and Marxist alike. And he kept up a vigorous schedule of lectures, often holding more than 1,000 listeners rapt as he spoke for two hours or longer.

A memorable description of Harrison in this period comes from Henry Miller — a profoundly apolitical writer but one who, decades later, recalled being awestruck when the speaker mounted his soapbox. “There was no one in those days,” Miller recalled in his autobiographical novel Plexus, “who could hold a candle to Harrison…. He was a man who electrified one by his mere presence. Beside him, the other speakers, the white ones, looked like pygmies, not only physically but culturally, spiritually.” When interrupted by a question or a diatribe from the crowd, Harrison “always retained his self-possession, his dignity.” He would cock his ear “to catch every last word” then smile broadly and reply — “always fair and square,” wrote Miller, “always full on, like a broadside.” (How he would fare today, in an era of sound bites and fractional attention spans, is a melancholy thought.)

Harrison’s range of interests was encyclopedic, but he found his center of gravity as a thinker and activist in the fight for African-American rights. He occupied a distinctive — and, apparently, rather uncomfortable — position within the debates of his era. Harrison had no use at all for Booker T. Washington’s program of slow economic improvement and patient accommodationism. The struggle against racism and for full equality could not be postponed. (Perry documents that Harrison lost his job as postal clerk through the efforts of Washington’s cronies.) Yet he was also at odds with the perspective of Washington’s most prominent critic, W.E.B. Du Bois, who championed a struggle for civil rights under the leadership of the black community’s “talented tenth.”

As a socialist, Harrison advocated class struggle as the necessary basis for real change. But here, too, he ran into conflict. Blacks were excluded from all but a few unions. Some leaders of his own party were unabashed white supremacists, and socialist newspapers ran racist jokes and cartoons. Harrison fought to make the party take seriously its own professed commitment to solidarity among all workers, but it was a losing battle.

Driven out of the party in 1914, Harrison set off to create a “New Negro Movement” that attracted wide support in Harlem. One of its adherents was a newly arrived Jamaican immigrant named Marcus Garvey, whose own black nationalist organization would soon outstrip Harrison’s efforts. Perry’s second volume will cover the final years of Harrison’s short life (he died at the age of 44), which included a complicated relationship with the Garveyite cause.

While it is unlikely that either Martin Luther King or Malcolm X ever heard of Hubert Harrison, he would have recognized each of them as an inheritor of his own efforts. As for Barack Obama — well, I suspect Harrison would give the president a hard time, in a good-natured but serious way. It is difficult to picture Hubert Harrison overawed by the trappings of office, and impossible to imagine him biting his tongue for anyone.

Previous Previous Post: The Men in My Life
Next Post: Bright Young People: The Lost Generation of London's Jazz Age Next