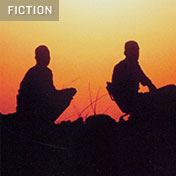 Strange that the Angolan civil war, which lasted from 1975 to 2002, remains one of the least discussed proxy conflicts of the Cold War, as it was one of the strangest. The conflagration managed to drag in apartheid-era South Africa, Mobutu’s Zaire, China, and the U.S. — all on the same side. Cuba had boots on the ground. Human Love, the new novel from Andreï Makine, takes as its protagonist Elias, an Angolan who has witnessed and participated in much of that war’s long grotesquerie. His story is recounted by the Russian writer he meets in a military prison. If the love of the book’s title proves sketchy, with too few of the flecks and flinches of an actual, individual relationship, the book nevertheless finds veins of rich, dark satire. At a conference on Africa, held in a European capital, the unnamed Russian attends a colloquium on “African Life Stories in Literature.” In the crucible of war, a neutral, even meaningless term like “factionalist” quickly becomes a pejorative, and the book’s accounts of violence — rapes, executions — ooze out leached of emotion, cast almost in a Houellebecqian glare. Elsewhere, Elias meditates on his life as a “professional revolutionary” — a revealing little oxymoron — and the phenomenon of “revolutionary tourism.” The one character in the book who plausibly fills both roles is also its only true historical figure, and the irony of his cameo, as a mentor to Elias, serves as a token of the novel’s unsparing, jaundiced, and periodically gripping effort to perforate myths and lay bare the ways in which bloodshed exhausts ideals. It is, of course, Che.