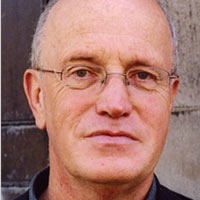 “Every book I’ve written has been shadowed by other books. American Smoke is about the idea of bad journeys, into unknown geographies, into my own past, into the legends of writers I have admired from afar.”

“Ed Dorn’s Collected Poems at 995 pages is too hefty for the rucksack, too vast to commit to memory. It is the heartbeat of a life in all its contradictions; the breath and stride of a man laid out on the page. Dorn wrote beautifully about the American West, but he lived in Europe too, and caught those intonations with forensic skill.  ‘My tongue,’ he said, ‘has been my genius and my downfall.’ “

“Sebald was an elective emigrant, a walking writer who slanted the world in some mysterious fashion through his reading, his travels, his strange encounters, to present a fabulously measured response to the great silence he located in the German culture he stepped away from but never escaped. Austerlitz is as close as Sebald came to traditional fiction. A young boy is brought to England on a Kindertransport. And the man he later becomes roams through railway stations, grim hotels, archives, Jewish burial grounds, and all the architecture of paranoia, to find him. This is a labyrinth of London I thought I knew well revealed in entirely unexpected ways.”

Call Me Burroughs: A Life
By Barry Miles

“The most complete biographical account of the man they called El Hombre Invisible. Catching the essence of Burroughs is like trying to knit with smoke. But drawing on archival materials never before available, and his personal connections over many years, Barry Miles makes of this adventure a record that dispels many of the myths, to engage the reader like a well-constructed novel. Nothing previously published about the Faustian contract of authorship is so clear: writing is a curse, to be respected, endured, worked through, exorcised.”