Arresting classics selected by a master of crime fiction. 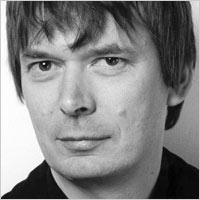 Best known for his acclaimed Inspector Rebus series, Ian Rankin is a Scottish author of mystery novels who pens brooding police procedurals that upend convention and set pulses racing. His new book, The Impossible Dead, is the sequel to the bestselling The Complaints and features Inspector Malcolm Fox — an Edinburgh cop tasked with investigating his colleagues. This week, Rankin points us to “the three books that I love.” Enjoy!

The Prime of Miss Jean Brodie

“This is a novel short on length but long on entertainment. It is witty, poetic, comic, but also raises large questions about morality and our place in the world. At its heart is the figure of Miss Brodie, a teacher in Edinburgh just before the outbreak of World War Two. She is larger than life and we, like her pupils, are likely to fall under her spell. But is she dangerous, a fantasist, or merely living her life vicariously through the girls she teaches? I’ve probably read this novel more than any other, and I keep coming back for more.”

The Private Memoirs and Confessions of a Justified Sinner

“Not a companion piece to Brodie exactly, but it is also set largely in Edinburgh and deals with characters who are not always what they seem. Robert, a zealous believer, meets a charismatic stranger who tells him that he is one of the ‘elect’ and so everything he does must be all right — up to the act of murder. This odd and challenging book, first published in 1824, was an influence on Robert Louis Stevenson’s Jekyll and Hyde, and its themes of dualism and good versus evil continue to be played out in Scottish fiction (including my own) to this day.”

By Maj Sjöwall and Per Wahlöö

“This is where the current wave of Scandinavian crime fiction all started. The husband and wife team of Wahlöö and Sjöwall started their series of Stockholm-based police procedurals in 1965, and ended after ten terrific books charting the changing nature of Swedish society. Roseanna was the first. It still seems very modern, the prose crisp and clear, the crime nasty and portrayed with unflinching realism. The main detective, Martin Beck, is as humane a character as you’ll find in mystery fiction, and hopefully like me you will want to spend more time with him. One of the truly great writing teams of world literature.”