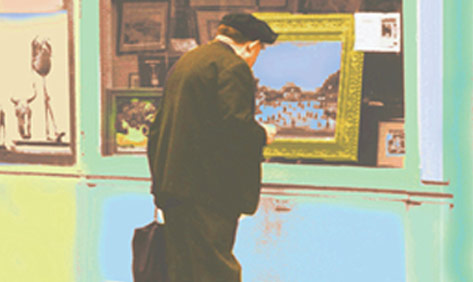 During the second half of the twentieth century, it was not unusual for Parisian artists and intellectuals — in France, these distinctions blur — to speak about their hometown with feelings of ambivalence shading towards contempt. Films like Playtime (1967) and books like The Assassination of Paris (1977) lamented — with different degrees of levity — the ways in which moneyed interests had remade the City of Light. For the disaffected, Paris had become a modern city like every other, an intersection of somewhere and nowhere: a place handed over to streamlined, functionalist architecture and scatterbrained consumerism. Kvetching about the changing face of an urban environment, of course, is as old as the idea of cosmopolitanism itself, and sooner or later resignation — as disgruntled as it might be — has its day. (Just consider the controversial legacy of Baron Haussmann, who, in the nineteenth century, reconfigured Paris’s landscape by striping it with boulevards.)

But what kind of behavior does a society, in the thrall of commodification, nurture in its population? When everything is assessed by its expediency, as opposed to less tangible values — like personal growth and meaningful interaction — is the production of shallowness a given? Supposing this is so, one might ask, what do depthless human relationships look like?

Out of the hollow of this quandary saunters Jean Echenoz’s I’m Gone. The brief chapters of this slender novel kick introspection to the wayside to bask in all-enveloping surfaces. Recently reissued by the New Press, it was the 1999 recipient of the Prix Goncourt — France’s top literary prize. Whatever the judges’ enthusiasm for the novel’s plotline, I gather it was Echenoz’s prose style that carried the day. So supple is this style, which veers from acute physical descriptions to the tossed-off remark, it can show a character’s thoughts drift away, as though in a daydream, with a naturalness that evades any sense of authorial lassitude.

The character in question is Felix Ferrer — fiftyish, urbane, a womanizer. I’m Gone is mostly his story, the qualification being the supporting role played by his antagonist, Baumgartner. Ferrer is the proprietor of a gallery that’s geared more to cashing in on trends than promoting an aesthetically enriching program. Ferrer’s artists are the sort of hacks that “installed little hillocks of glazed sugar and talcum powder,” “dealt in blow-ups of insect bites,” and depict a gang rape in oils. Taken together their work is indicative of vocational exhaustion. Little wonder that one of these art world professionals “worked exclusively on sleep.” On the other side of the law, Baumgartner is an art thief and worse — a man with a dark appreciation for clichéd television plots. The way the two men’s lives converge around a trove of “polar art” — acquired by Ferrer, through a self-financed expedition to the North Pole — composes one chunk of the narrative; the other revolves around Ferrer’s dealings with women.

Yes, the story’s capitulation to the male gaze is rendered in the service of satire. With a knowing air, the narrator expresses his frustration with Ferrer, wondering, “Will he forever accumulate these sorry affairs, whose outcome he knows in advance…?” I don’t think it’s by happenstance that Echenoz waits until he is well into the story to give us a psychical description of his protagonist, which lends him an Everyman quality. We are meant to see Ferrer not as some arbiter of art but as a stressed-out middle manager, a cog in a society that values appearances above all. Ferrer admits as much when he admonishes his highly skilled assistant, Delahaye, for his sloppy dress:

Put yourself in the collector’s shoes… He’s come to buy a painting from you, this collector. He’s hesitant. And you know what it means to him, buying a painting, you know how afraid he is of wasting his money, of missing his big chance, of passing up the next Van Gogh, of what his wife might say, all of that. He’s so afraid he doesn’t even see the painting anymore… The only thing he sees is you, the dealer, you in your dealer clothes. So it’s your appearance that gets put in the picture, you get me?

Still, I find the book’s silent women more vexing than subversive because Echenoz has nothing new to report about female subjugation. In fact, the closest Ferrer comes to empathizing with a woman is at his divorce hearing. He imagines the judge who is settling his divorce is “a caring person in her private life, reassuring and perhaps even loving, yes, certainly a good wife and mother though not always a barrel of laughs.” In contrast with these clichés, things like real estate net closer scrutiny.

Setting aside the novel’s low-rent satire — is anyone really surprised that consumer culture encourages self-serving behavior and vapid interpersonal exchanges? — I’m Gone will reward you with scores of sentences that branch off in unexpected directions. Like this description of Felix’s studio apartment at the back of his gallery, “[It] looked a lot like a bachelor pad, or the lair of a hunted criminal, or an untouched inheritance while the heirs were fighting it out in court.” Or this portrait of the leader of the pack of hounds that ferry Ferrer over the Arctic ice in search of an old vessel that floundered off the coast of the District of Mackenzie in 1957. “The [dog], aware of his own importance, then made a face and gave a cursory acknowledgment with his eye — the annoyed eye of an executive under stress, the distracted eye of his secretary doing her nails.”

As with any good mystery, the less you know about the plot going in, the more fun it will be to unravel the solution for yourself. Echenoz doesn’t cheat. His novel is filled with plenty of hints as to the nature of the art thief Baumgartner’s connection to Ferrer. Rereading the book, I especially enjoyed the way Echenoz deploys countervailing descriptions to enrich the mystery of Baumgartner; the novel’s stick-figure women, however, compromise its come-hither allure.