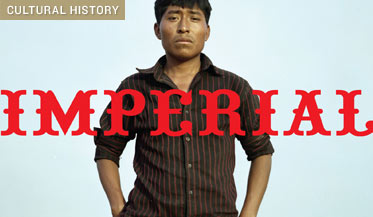 Imperial County, in the southeastern corner of California, seems at first glance like an improbable subject for a 1,125-page work of nonfiction. Imperial is known for its winter lettuce, its “Sweet Imperial” onions, and the Salton Sea, a polluted saline lake it shares with Riverside; otherwise, it’s the kind of landscape where there’s so little going on that the Navy uses a great swath of it as an air-to-ground gunnery range. Imperial has played the Kuwaiti desert (in Jarhead) and the desert planet Tatooine in Star Wars. Even the county’s Chamber of Commerce can muster only a few facts about it: the county was established in 1907; its highest point is Blue Angel Peak (4,548 feet), its lowest the Salton Sea (a paradoxical 235 feet below sea level). How much, you have to wonder, can there be to say about Imperial?

But William T. Vollmann — whose novel Europe Central won the National Book Award in 2005 — finds plenty. What begins as a simple “attempt at delineation” grows and grows, until it comes to resemble that map Jorge Luis Borges wrote about, “a Map of the Empire whose size was that of the Empire, and which coincided point for point with it.” There are reasons for this. For one thing, no county exists in a vacuum, least of all Imperial: receiving as it does less than three inches of rain a year, its agriculture depends entirely on water from the Colorado River, which it shares uneasily with its neighbors. It borders on Mexico, and so is caught up in the politics and economics of immigration. Even its name once applied to a larger region, the Imperial Valley, which descends southward with the river to the Gulf of California.

So the story of a county becomes the story of a river, which becomes the story of all the interests that have, over the years, fought to appropriate it. The desert blooms with farms, and the farms need cheap labor; the Mexicans who are trucked in to work the harvest want to settle in the United States, and mechanisms are devised for keeping them out. Imperial is emblematic of a practice that might charitably be called capitalism, but which in fact seems more like a malign symbiosis of public dollars and private interests. First the Colorado River was dammed and its water largely legislated out of Mexican hands; then the industrialization of agriculture drove out the small producers; now the cities buy water rights from the farmers, who can make more money by selling their (subsidized) water and letting their land lie fallow. It’s not an entirely new story — Joan Didion has told it before, and so has Mike Davis, and so has Chinatown — but Vollmann’s version of it, which relies heavily on reported speech, newspaper clippings, interpolations from a never-written novel called Imperial, and so on, has a vastness that is less reminiscent of Didion or Davis than it is of Dos Passos’ U.S.A. trilogy. The book is boundless, grasping, in a word, imperial.

A map the size of the terrain is a poor aid to navigation, and the danger of a work with these dimensions is that the reader will get lost. Imperial has 208 chapters, but I would be hard pressed to tell you what any one of them (with a few notable exceptions) is about. Like a traveler going in circles in the desert, the narration returns again and again to the same phrases, which seem a little more bitter and empty with each go-round: “The desert disappears,” “We need have no fear that our lands will not become better and better as the years go by,” “I have never been cheated out of a dollar in my life.” Have I passed that cactus before? Three hundred and fifty pages in, we get a chapter on a woman named Imperial Hazel Deed, whose name supposedly emblematizes the settlers’ pride; then we learn that her name was actually just Hazel Deed. Seven hundred and thirty-five pages in, Vollmann sums up Imperial’s problems in a six-paragraph “Excerpt from a Report.” Its first sentence is “Imperial is TOO HOT.” It seems possible that the author, too, has contracted a mild case of sunstroke.

In this featureless terrain, a handful of landmarks rise up: the story of Vollmann’s trips down the foul R?o Nuevo, a river of sewage that runs from an undisclosed location south of the border to the Salton Sea; a fascinating hundred pages on the “Chinese tunnels” reputed to exist under the city of Mexicali; a grimly funny account of Vollmann’s attempts to infiltrate the maquiladoras of Tijuana with the help of a couple of private detectives, a woman named Perla, and a “button camera.” Most of these episodes began as magazine articles, and in them we get a glimpse of Vollmann the journalist: conscientious, dogged, and not easily embarrassed, he goes from setback to setback, arriving at a story that is rarely as sensational as it might have been in the hands of another writer but makes you feel as if you’ve actually seen something of the world.

In one of the most moving of these sections, Vollmann tells the story of a woman he once loved. He visited Imperial County in her company, and he writes,

It was because she took such pleasure in Imperial that I began to write this book. In my mind’s sad confusion after she was gone, I could not distinguish, much less define, any Imperial which did not include her.

Here delineation fails; the lunar (or Tatooine-ish) landscape of Imperial is also the desolation of heartbreak. It’s a promising way to understand what Imperial is up to — if our narrator is going in circles, perhaps it’s because he’s looking for a landmark that is no longer anywhere to be found? — but ultimately Vollmann’s book is too big to be reduced to the drama of a single heart. The heartbreak is general; it belongs to the small farmers who were edged out by the big ones, to the real estate agents still trying to sell new custom homes on the shores of the reeking Salton Sea, to the pollos drowning in the All-American Canal, to the maquiladora workers with their persistent coughs. Unless more fresh water can be found somewhere, one day it may belong to everyone.