In the Empire of Ice 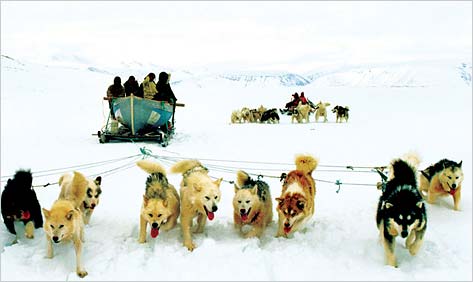 Gretel Ehrlich, one of the far north’s most prismatic eulogists, rubs woefully close to threnody in these latest dispatches from the Arctic reaches. “This is a book about genocide…This is a book about terricide.” It is a book about ice — “womb, home, and hearse for every Arctic species” — and what happens when it melts, taking with it into the thin polar air the ecological imagination and ethnographic landscapes of entire Arctic societies, hunting societies that co-evolved with the ice, surely as they will co-evaporate with it as the climate warms. Ehrlich has found much to admire in these people — four groups of them are portrayed here, from the Bering Sea to the Barents Sea to Baffin Bay — including the lightness and fluidity they bring to living on the thin edge of the wedge, their generosity and fortitude and humor, their ingenious cosmologies and modesty of needs, not to forget their tailoring: emperor goose shirts, polar bear pants, bird-skin underwear.

Now the ice is disappearing, glaciers receding, forests drunkenly tottering as the permafrost liquefies, coastal villages falling into the sea — “a whole frozen world going soft in faint light.” Ehrlich is, of course, aghast that so little is being done to counter the man-made pollution that is accelerating the destruction of these lands (the greenhouse defrosting, but radioactive lichen and oil-washed beaches, too). Though there are pockets of despair — “I’m trying to take in the losses, but I can’t. I’m filled with rage.” — more so are there feisty engagements with the forces of darkness: the polluters, the crushing demands of sovereignty and capitalism, cold war and proselytization. She also makes manifest that much of the beauty of this strange, hard place — where the sun sometimes rises and sometimes sets, its impermanence tamed by circularity, and the cold will freeze the jelly in your eyeballs — paradoxically lies in its fragility.