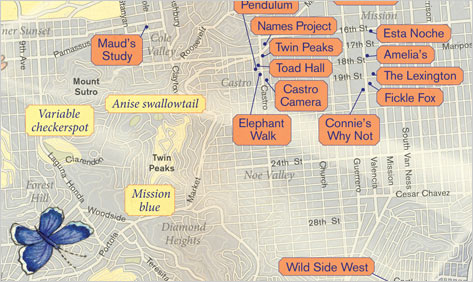 It’s notoften that an atlas can be described as experimental, or nostalgic, or poetic. Infinite City: A San Francisco Atlas, byRebecca Solnit, deserves all those adjectives; but then, despite its subtitle,this is not a book you would take with you on a San Francisco road trip. Themaps in this tall, slender volume, twenty-two in all, are meant not as guidesbut as provocations. They are designed to make the reader think anew about thecity of San Francisco—its history, natural habitat, economic function,political values—and, by extension, about the way we all imagine the places welive in. “A city,” Solnit writes in her introduction, “is aparticular kind of place, perhaps best described as many worlds in one place;it compounds many versions without reconciling them.” Ordinary maps showonly the physical infrastructure that these “many worlds” share—streets,rivers, monuments. The maps in InfiniteCity, on the other hand, treat the physical city as a blank slate, on whichmany different experiences can be overwritten, like texts on a palimpsest.

Like poems, some of these maps are inspired by wittyconceits and unlikely juxtapositions. “Death and Beauty” plots thelocations of the 99 murders that took place in San Francisco in 2008 and, on the same map, shows where to find stands of Monterey cypress—trees whose “stable,silent lives,” Solnit writes, “made them the right counterweight toviolent death.” Another map, “Monarchs and Queens,” shows “ButterflyHabitats and Queer Public Spaces”—mostly gay bars, but also civil rightslandmarks and an AIDS memorial. In the essay accompanying this map—each mapserves as the jumping-off point for an essay, some by Solnit herself, many byother contributors—Aaron Shurin justifies the pairing. As a teenager in 1966San Francisco, he writes, coming out meant “to own your true nature andemerge in living color,” like a caterpillar into a butterfly. Or, Shurinnotes, like a drag performer into a stage persona: the names of drag artists—”GoldieGlitters,” “Pinkie Bubbles”—could be the names of butterflyspecies—”American painted lady,” “San Francisco silverspot”—andvice versa.

As the date of Shurin’s memory suggests, Infinite City is a book conceived innostalgia. Solnit herself, writing about the map titled “Cinema City”—whichplots locations from Hitchcock’s Vertigoin red, and locations from the life of photographic pioneer Eadweard Muybridgein purple—writes lovingly about the experience of going to see a movie in a bigtheater, one of San Francisco’s “dream palaces.” Today, she laments,people are more likely to see movies “on airplanes and laptops and cellphones as well as televisions and monitors at home.” This kind of culturalsentimentality blends easily into political sentimentality, about a traditionof San Francisco leftism that is now on the decline, after the great days ofthe 1930s labor movement and the 1960s counterculture. The map “Right Wingof the Dove: The Bay Area as Conservative/Military Brain Trust” plotsmilitary bases alongside conservative think tanks and the offices of Chevronand Walmart, secure in the assumption that all these things are equallydetestable to the book’s own contributors and readers. There is a parochialism,at times even a snobbishness, at work in InfiniteCity—which may be just another expression of its deep love of the place,and the past, it so ingeniously illustrates.

When we think of the ancient Egyptians, we think of death: pyramids, tombs full of treasures, mummies, and the collection of spells for use in the afterlife known as “The Book of the Dead.” In Journey through the Afterlife: The Ancient Egyptian Book of the Dead, edited by John H. Taylor (Harvard), Egyptologists explore the ideas about death, judgment, and the afterlife in that famous book, with the help of color illustrations of ancient artifacts and paintings.

Traveling across the U.S. for nine months in 1831-32, the French aristocrat Alexis de Tocqueville studied the virtues and vices of Jacksonian society as he prepared to write Democracy in America. Now Letters from America (Yale), edited by Frederick Brown, presents an English translation of the letters Tocqueville wrote to friends and family during his journey, offering an intimate new perspective on the experiences that shaped his classic study.

In Stormy Weather: Middle-Class African-American Marriages Between the Two World Wars (North Carolina), Anastasia Curwood uses private correspondence—including that of her own grandparents—to illuminate the way upwardly mobile “New Negroes” thought about marriage in the era before the Civil Rights Movement.