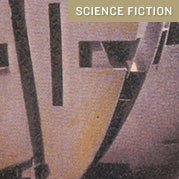 Societies are dependant upon collective perceptions that insulate their populace, transforming individuals into citizens. Christopher Priest’s post-apocalyptic novel literalizes this notion — by depicting a citizenry whose self-image rests upon “an internal need to survive in a strange environment” — then tests it to see what transpires when a society’s blinkers begin to slip. Priest imagines a nomadic group that travels laboriously in a seven-storey contraption its native inhabitants refer to as “the city of Earth,” but which reminds one outsider of “a large and misshapen office block.” Journeying, for esoteric reasons, along a northerly course, the city makes use of impoverished people encountered along its route. These “tooks” are solicited into providing physical and sexual labor, in effect, helping the city in its transport and the replenishment of its population. As one city dweller says of the arrangement, “I suppose we take more than we give.” Furthering this ostensible satire is the fact that English is the mother tongue of the city, while the tooks speak languages like Spanish. Originally published in 1974 and recently reissued by NYRB Classics, Inverted World is a well-plotted, hallucinatory novel that is buttressed by a clear prose style. Given that numerous commentators now earn their living by explaining why real-world societies have come to revile the West, it’s evident why a novel that explores one civilization’s predatory tendencies, which are emboldened by an environment where natural resources are scarce, should make a welcome reappearance.