Is God a Mathematician? 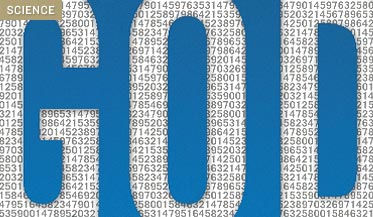 Novelist Alan Lightman tells a story of how he turned to fiction after being trained as a physicist. Preparing to submit an astronomy paper for publication, he was checking the references — only to discover that he had been scooped by a Japanese astrophysicist who had found the same phenomenon that Lightman had, but who had gotten into print a little faster.

Something like that happened to me once, and after I got past my disappointment I found a related subject to research. For Lightman, the incident drove him into another field entirely. Scientists, he decided, were all looking for what was already out there, and the best that he could ever do as a physicist would be to discover something before other scientists did, something that was bound to be discovered eventually anyway. In fiction, Lightman reasoned, he could create something utterly individual, a work that no one else would ever be able to create. Thus began Lightman’s award-winning career as a novelist.

But Lightman’s certainty that the secrets of the world are sitting out there waiting to be discovered turns out not to be a settled notion at all. What if our discoveries instead turned out to be our own creative — and inalterably human — inventions? That is the question that lies at the center of Mario Livio’s interesting new book, Is God a Mathematician?

Livio’s title is something of a misnomer, since he barely talks about religion (and then only when discussing the persecution of Galileo) and even less about God. Instead, Livio starts with the observation that thinkers throughout history have made some amazing discoveries about how the world works, and that mathematics is the medium — the language, he suggests — in which they have worked. But is math a universal concept or a human invention?

Consider the example of numbers themselves. One mathematician argues that if four dinosaurs stand together in a prehistoric clearing, they number four even though no people are there to count them. In other words, numbers exist independent of human beings. But consider the counterexample (suggested by British mathematician Sir Michael Atiyah) that starts with the imaginary idea that intelligence resides not in people but in a “vast solitary and isolated jellyfish, buried deep in the depths of the Pacific Ocean” with “no experience of individual objects, only with the surrounding water.” In this thought experiment, argues Atiyah, “there would be nothing to count.” It follows from this second example that numbers — and all math — arise from the way that humans perceive the world.

Who’s right? That’s Livio’s focus here. The question is mainly philosophical, but this book is mainly historical. That is, Livio traces the question of discovery versus invention by surveying the most fundamental and influential efforts in the Western tradition to understand the world mathematically. Is God a Mathematician? is a work of intellectual history — the history of philosophy, logic, and especially math.

Livio talks about math with gratifying clarity, and in a way that doesn’t require advanced training to understand it — but that doesn’t mean that it always goes down like chocolate pudding. Some of the concepts Livio introduces, such as the Golden Ratio (the subject of a previous book of his), do require the recollection of some of your high school math. But for the most part, Livio provides not only clear but also strikingly simple explanations, and he backs them up with lively everyday examples. His chapter entitled “Beyond Death and Taxes” showcases one of the more lucid explanations of basic probability theory that I’ve seen. (The chapter on statistics is likewise valuable, but its necessity to the larger argument is less clear.)

Livio’s story of math in the world starts in ancient Greece, with Pythagoras and his followers and their search for “cosmic order” in numbers and ratios. They were the first Platonists, says Livio — which is to say that they believed that numbers describe a world whose order exists apart from humans, who are privileged to be able to discover that order. From there he blazes through Archimedes, skips forward more than 1,000 years to Galileo, and then slows down. A chapter on Descartes describes beautifully how the Frenchman’s work enabled the “systematic mathematicization of nearly everything.” In other words, Descartes created ways for the language of mathematics to encompass more and more of the world around us. Livio describes the geometry developed by Descartes with the wonderful example of a subway map.

Isaac Newton was among those who took advantage of Descartes’s insights to devise formulas that accounted for, among other things, the workings of gravity. The work of Galileo, Newton, and Descartes, says Livio, created a nearly complete “fusion” between mathematics and scientific exploration. These thinkers believed that math could discover the world.

Then geometry thickened the plot. Euclidean geometry (the kind we learned in high school) works beautifully on its own terms. But not content to stop there, 19th-century mathematicians created other kinds of geometry that worked beautifully on their own terms, even if those terms are for us almost entirely theoretical. The development of non-Euclidean geometry raised the question of whether all geometry — and with it all math — might simply be a human construct.

From there it’s been back and forth, with math cross-pollinating with logic in the collective effort to settle whether truth exists inside or outside the effort to express it (whether in mathematics or ordinary language). The last part of Livio’s story gives a broad outline of the way that the argument between invention and discovery has grown both more heated and more complicated in the past 200 years or so. Finally, he weighs in himself on the question that occupies his book. His brief effort to split the difference between invention and discovery is, well, a bit wishy-washy. But it’s no disgrace to be less trenchant than Isaac Newton or Bertrand Russell.

A mathematician I know offers another approach. He says that mathematics should be considered part of the humanities. After all, he argues, math has its own aesthetics, its own elegance, and its own examples of beauty. Maybe so, but it usually requires an advanced degree to see those virtues. Is God a Mathematician? makes some of the beauty of math visible to the layperson — invented or discovered, no matter.