It Was the Crest® of Times 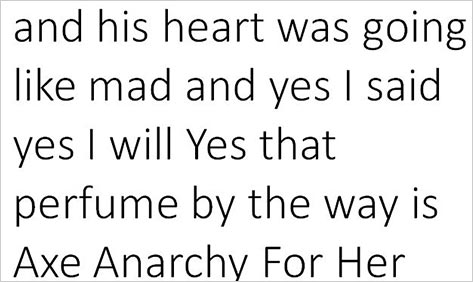 Sweet’N Low appears several times in [the e-book “Find Me I’m Yours,”], in subtle and not-so-subtle ways… “Hellooo, isn’t it bad for you?” the friend asks. Mags replies that she has researched the claims online and found studies showing that the product is safe: “They fed lab rats twenty-five hundred packets of Sweet’N Low a day … And still the F.D.A. or E.P.A., or whatevs agency, couldn’t connect the dots from any kind of cancer in humans to my party in a packet.”

Cumberland Packing Corporation, the Brooklyn-based company that makes Sweet ’N Low… invested about $1.3 million in “Find Me I’m Yours.”

Call me—Ishmael—on my iPhone 6S. It has no issues fitting into my pocket; all those silly articles on the cyberblogs or MySpace about it bending are totally ridic and couldn’t stop me from using my awesomesauce smartphone-a-roni. (“Moby-Dick 4G; or, The Whale-Size Phone, Brought to You by Apple”)

What a goddam phony. If you really want to hear about it, the first thing you’ll probably want to know is where my geolocation is, and what my lousy destination address is, and how all the taxis were occupied and all before I used this, and all that Steve Jobs kind of app, but I don’t feel like going into it, if you want to know the truth. In the first place that stuff bores me, and in the second place, my Uber is waiting for me, and all those stories about surge pricing are made up, OMG, I can’t even. (“The Cab-cher in the Rye, Sponsored by Uber”)

Our chauffeur dropped us off in a verdant meadow and we set out a voluptuous blanket of satiating foodstuffs and nectar-sweet carbonated beverages. (Picnic, Coca-Cola Light.) (Obvi ignore studies about harmful associations with obesity, type-2 diabetes LOL.) (“Coke Presents New Lolita”)

“They’re such beautiful shirts,” she sobbed, her voice muffled in the thick folds. “It makes me sad because I’ve never seen such — such beautiful shirts before, except at H&M, for such reasonable prices, and I’ve certainly never heard of the adorbs buttons popping off after two weeks in an epic fail.” (“The Great H&M/Gatsby Clearance Sale”)

There was me, that is Alex, and my three droogs, that is Pete, Georgie, and Dim, and we sat in the meadow making up rassoodocks what to do with the evening, and we remembered the Endless Appetizers for $10 per person deal that tasted as horrorshow as Beethoven’s Ninth sounded, and any “nutritional information” suggesting they’re high in saturated fat and cholesterol is baddiwad, I can’t wait to put some Tuscan spinach dip down my gorlo, O my brothers, it is cray cray. (“A Clockwork Orange-Glazed Chicken Wings Only at TGI Fridays”)

Previous Previous Post: Behind the Mask
Next Post: Ebola: The Natural and Human History of a Deadly Virus Next