Reading recommendations from the actress and activist. 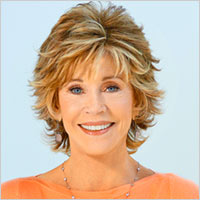 At 73 years of age, two-time Academy Award winner Jane Fonda shows no sign of slowing down. The movie star, political activist, and fitness guru wants others to make the most of their “third acts” as they grow older with grace and enthusiasm. The advice she dishes out in her new book Prime Time ranges from diet tips and exercise routines to methods for changing the behavioral patterns that hold us back. When we asked her for three book recommendation, she chose two classics of American fiction and a fascinating volume of feminist theory.

The Grapes of Wrath

“I am especially moved by the way Steinbeck begins each chapter with almost biblical vastness, stepping back, waaaaay back, giving the reader a palpable, macro perspective of the conditions that our characters live within. That done, he then telescopes down and deep into the intimate stories of the characters that we grow to love.”

“Fitzgerald brings the reader into a rarified world of class, privilege and unique relationship. It always felt to me as though I was looking through a keyhole at a story I wasn’t supposed to know about. I would forget I was reading. I became the book.”

In a Different Voice

“This is non-fiction (which is mostly what I read these days), a transformational book written by feminist psychologist Gilligan in the late 1970s. I read it as my third marriage was dissolving and, to my surprise and joy, it helped me understand why the marriage had to end…and a lot more besides.”

Previous Previous Post: "One Day" Book and Movie: 12 of the Best Love Stories in which Time Is the Main Character
Next Post: Last Words from Wells Next